Crop insurance has a significant impact on agricultural productivity by providing income stability for the producers and regulating producer behavior.

Rapid population growth and the decline in arable lands worldwide make achieving increased agricultural productivity a top agenda item for all countries. Global warming however has significantly increased the risks to agricultural production. Severe weather events of the magnitude of disasters such as drought, excessive precipitation, floods, frosts, and hail directly affect the agricultural sector, cause risk to agricultural production, and put producers and consumers in a difficult situation. Farmers who incur significant income losses quit agricultural activities and migrate to urban areas, and that decreases agricultural output in the long run and impose an upward pressure on prices of agricultural products. As subsidization of risks to agricultural production by the government brings an additional burden on the budget, it is not accepted as a sustainable solution. Many countries, particularly those with intense agricultural production, develop risk transfer systems to distribute agricultural risks equally among related actors. In this respect, widely used “crop insurance” stands out as the system that provides the most practical and modern solutions as a protection against agricultural risks. The magnitude and diversity of agricultural risks makes it impossible for the private insurance sector to cover all the risks alone and urges distribution of the likely financial burden in a multi-layer structure. Accordingly, structures that suggest a balanced distribution of risks among producers, the insurance system and the public sector stand out as good solutions. The fact that the share of financial burden of the risk covered by the public sector is met by the taxes makes the effectiveness of the crop insurance system more important. Partially covering the risk by the government also minimizes the possible market imperfections [Goodwin and Smith, 2017].

The Law on Crop Insurance No.5363 dated 14.06.2005 was enacted to contain risks in the Turkish agricultural sector. Briefly, this is how the system operates: There is an “insurance pool” established by insurance companies pursuant to the law. The insurance companies contributing to the pool system arrange insurance through standard policies in the name of the pool and both the premium and risks are transferred to the pool. The public sector contributes to the insurance premium on behalf of the producer. While the system insures income losses stemming from quantitative losses due to external shocks, it doesn’t cover losses stemming from price changes.

Basically, crop insurance grants an income guarantee for agricultural producers at times of natural disasters and encourages them to continue agricultural activities in the face of a variety of risks and uncertainties. Moreover, it prevents risks from impeding investments in the production process, regulates producer behavior and thus helps increase productivity. Nevertheless, theoretically, insurance for risks entails the problems of moral hazard and adverse selection. For the agricultural sector, it sounds rational that as the insured area gets bigger, the risk aversion tendency will decrease and those with the highest risk will start to be insured [Akerlof, 1970; Arrow, 1985]. For instance, when an insurance company decides to sell more insurance policies when the demand for policies is constant, it would have to go for individuals classified as “more risky” and thus the ex-ante risks would increase; or when it loosens the penalties it imposes on risk behaviors of its current customers, the customers’ risk aversion tendency may slacken.  The basic hypothesis that this theoretical framework suggests implies that as the insured land grows larger, productivity will increase rapidly initially, however, this increase will diminish and after the saturation point is reached, the decline in productivity will continue if insured lands continue to grow. In more mathematical terms, a concave functional relationship exists between the insured land and agricultural productivity.

Under a well-designed principal-agent description, it is possible to suggest a model that will minimize moral hazard and adverse selection problems. Generally, the biggest obstacle to developing such a model is the unobservable components pertaining to the client’s risk behaviors. Insurance companies are developing several methods to detect such components and the effectiveness of the existing methods is increasing. Nevertheless, the larger uncertainty and diversity in customer profile and production in the agricultural sector makes these methods relatively ineffective and costly. Moreover, it is acceptable that the public sector might be willing to bear more risk than it should because of the social and cultural dimension of agricultural activities. Therefore, it is a widely held conviction that the existence of a “generous” crop insurance system, in which the public sector is included, increases total prosperity. Yet, to develop alternative policies, it is important to know the answer to the question “What should be ratio of insured land that will maximize productivity in agriculture?”. In this respect, this blog post will discuss how crop insurance affects agricultural productivity. Moreover, the relation between insured land ratio and product price is analyzed and the results are evaluated with respect to the insured land-productivity relationship.

In this study, insured land and price information are used on province and product basis, and cultivation area and production information are used on district and product basis. The data set is composed of 115 products for the 2007-2015 period. A second-order polynomial structure (which means the main independent variable and its square have been used concurrently) has been used to test for the existence of a concave relationship. At the first stage, each product is aggregated from province level to country level to facilitate a macro-analysis. Results of productivity regressions, which is defined as the amount of production per cultivation area, are shown in Table 1 for all agricultural products and separately for fruits, vegetables and grains. While there is no statistically significant relation between insured land for all agricultural products, vegetables, fruits and productivity; there is a concave relationship for grains that confirms our hypothesis. 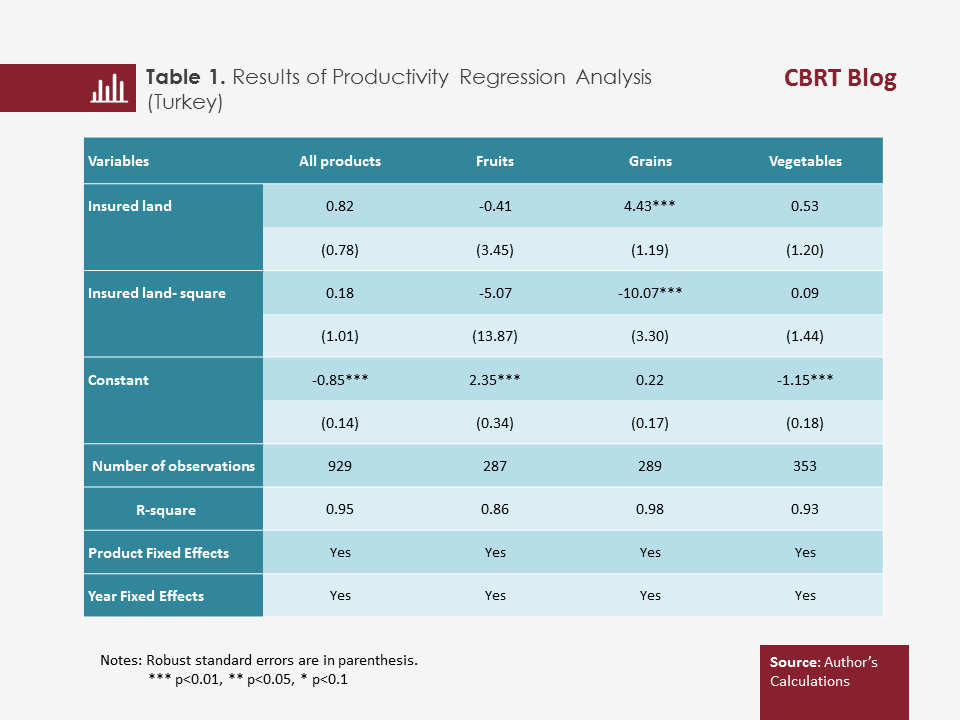 Departing from the fact that some results can be disguised in such compiled regressions with a low number of observations, the regression analysis is repeated using richer data at province and product level. Accordingly, in analyses based on provinces, after controlling for province, time and product fixed effects and their interactions, our findings confirm the concave relation between insured land ratio and productivity for All Products, Fruits and Grains (Table 2). While there exist no statistically significant relationship for vegetables; the concave relation is evident. To sum up, we find that the insured land-productivity relationship exhibits the concave structure implied by the theory.

Testing this relationship requires a more complex analysis. In some provinces, some products are not produced or the amount produced is far less than the amount demanded. In this case, products are needed to be transported to these provinces from provinces the related goods. Thus, the price of product A in Province X is affected by the market dynamics in Province Y in which Product A is widely produced. To control for this situation, we applied a different empirical strategy. By using Herfindahl–Hirschman index, we calculated concentration ratios for each product for every year. We didn’t do any corrections for products with concentration ratios of 0.25 or smaller because these products do not concentrate in specific regions. For products with concentration ratios of 0.25 and more, we assumed that all provinces except the top three producers of Product A procured this product from one of the top three producers closest to it. Therefore, we recalculate cultivation area and insured land data according to this assumption. The results of the regression analysis after this arrangement are shown in Table 3. Even if statistical significance is observed only in All Products and Vegetables columns, in the big picture, the regression coefficients confirm the existence of a convex relation in all categories. In other words, it is found that the insured land ratios have initially a decreasing and then increasing impact on prices, complementary to the picture reflected by the productivity results. 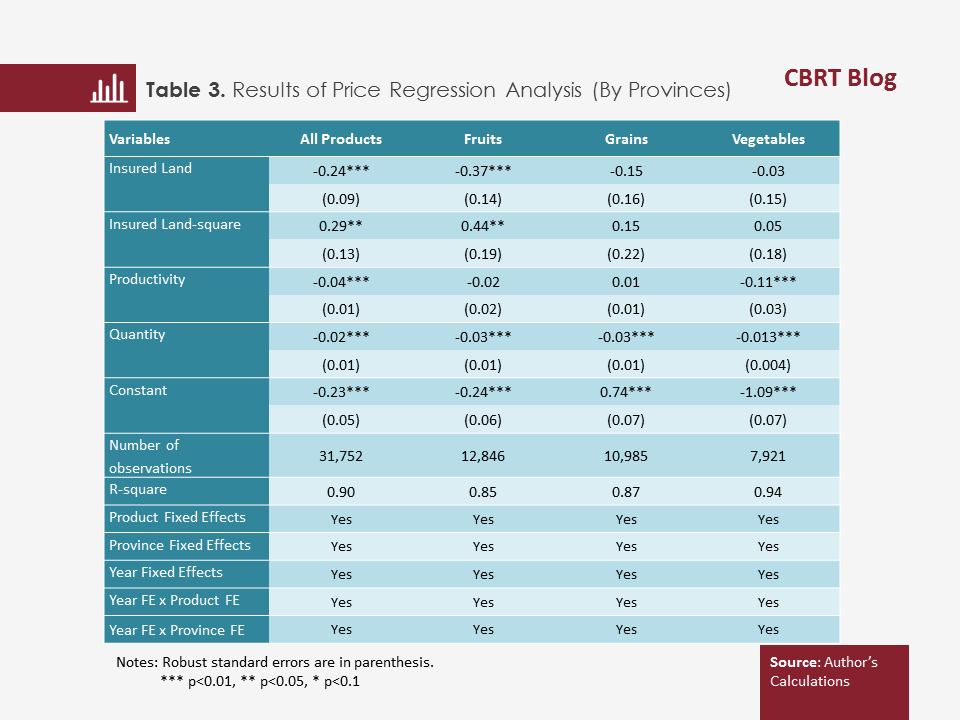 To sum up, crop insurance has a significant impact on agricultural productivity by providing income stability for the producers and regulating producer behavior. According to our findings, at the beginning, an increase in the insured land induces a rise in productivity by reducing uncertainties and boosting confidence. Nevertheless, once a threshold is exceeded for insured land, problems of moral hazard and adverse selection may rise and a decline is observed in productivity. We found that this threshold is 0.40 on average. Productivity increases until the ratio of insured land reaches 40 percent, but trends down once the ratio exceeds 40 percent. This means the insured land ratio that will maximize productivity is 40 percent when the average of all products and all regions is considered. The convex relation observed in prices confirms that the productivity channel is functional and that the threshold value is 40 percent. These results show that the crop insurance system has a significant impact on agricultural productivity as it provides income guarantee for the producers and influences productivity by regulating producer behavior. Taking into account the contribution of public sources to the crop insurances system, it is important for a well-functioning system to use an effective inspection mechanism that reduces the moral hazard and adverse selection problems to the minimum level.