Serap İnci Özyer is a Researcher at the CBRT.

Mehmet Kasım Tırpan is a Central Bank Specialist at the CBRT.

In their debt management reports, countries such as Brazil and South Africa report on the instruments held by domestic debt stock investors. Although these data are less comprehensive[1] than Turkey’s, narrowing the possibility of cross-country comparison, nevertheless examining the distribution of investors’ debt instrument preferences, an important demand side factor for the debt stock, enables a limited comparison[2]. 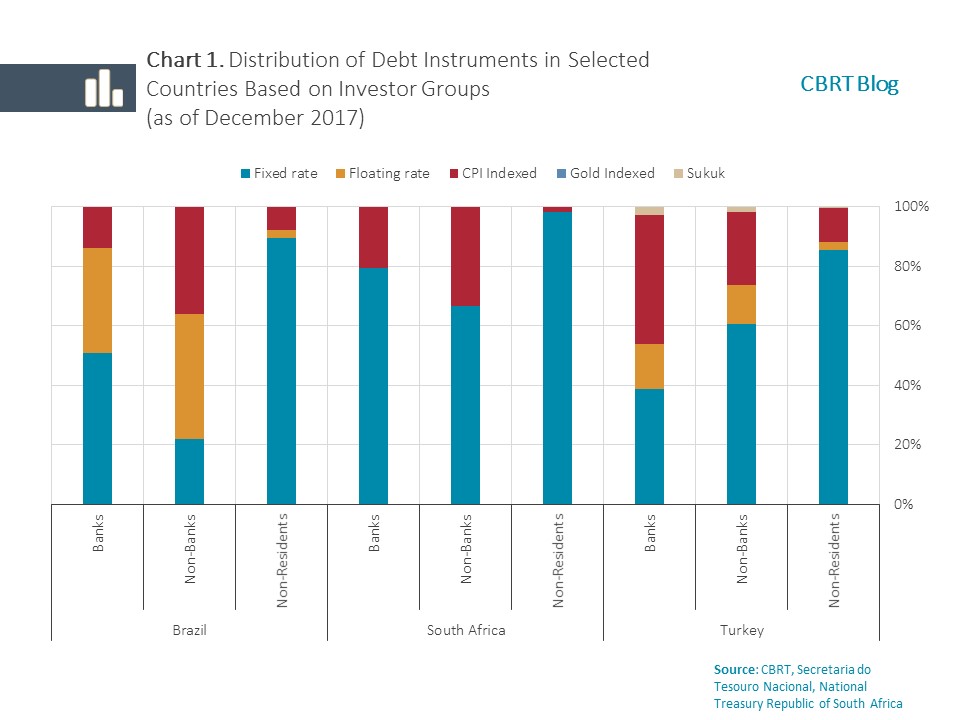 In sum, foreign investors in Brazil, South Africa and Turkey prefer fixed-rate instruments while instrument preferences of other investor groups vary across countries.

The diversity of instruments preferred by the banking sector is notable. Particularly, a large portion of CPI-indexed and floating-rate instruments are held by banks, possibly to compensate for the maturity mismatch between domestic borrowing and deposits. Meanwhile, participation banks solely invest in sukuk bonds, an instrument in which they also happen to be the major investor. The debt stock of non-bank investors is mostly composed of fixed-rate government bonds.

Measure of Resilience against Shocks

An HHI value close to zero indicates a variety of investors or instruments in the market, which suggests a balanced distribution. If the index takes values around 1, this implies a monopolistic market structure, which therefore signals high concentration and fragility.

As data sets in selected countries are not compatible with the data set in Turkey, the cross-country analysis of the resilience against shocks is based on the total domestic debt stock concentration in these countries by investors[5]. This concentration is obtained by adding the squares of the shares of each debt stock holder, thereby formulating an HHI for the total domestic debt stock (Chart 3). 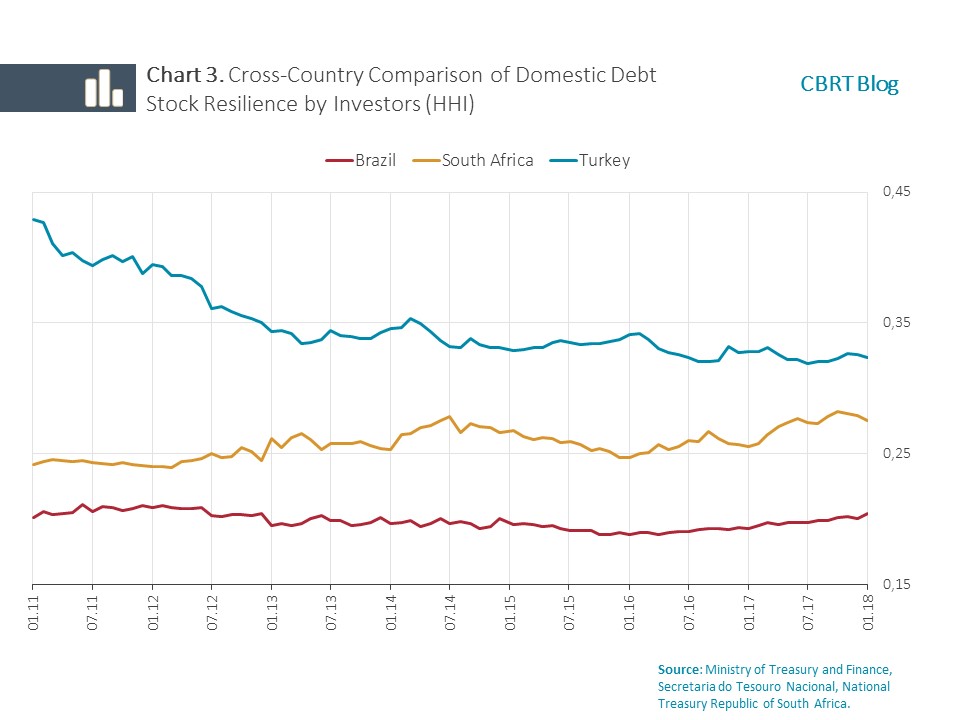 In the detailed resilience analysis for Turkey, we examine the concentration of investors based on debt instruments and vice versa. The concentration of investors by instruments is obtained via adding the squares of the shares of the instruments of each holder within the total debt stock, which measures the variety of instruments. During the 2011-2017 period, HHI values across the banking sector (excluding participation banks) were quite low, which indicates that a variety of tools was preferred by the sector (Chart 4). On the other hand, the CBRT and participation banks opted for a single instrument but the fact that their shares remained low within the total domestic debt stock holders did not hamper the resilience of the domestic debt stock. 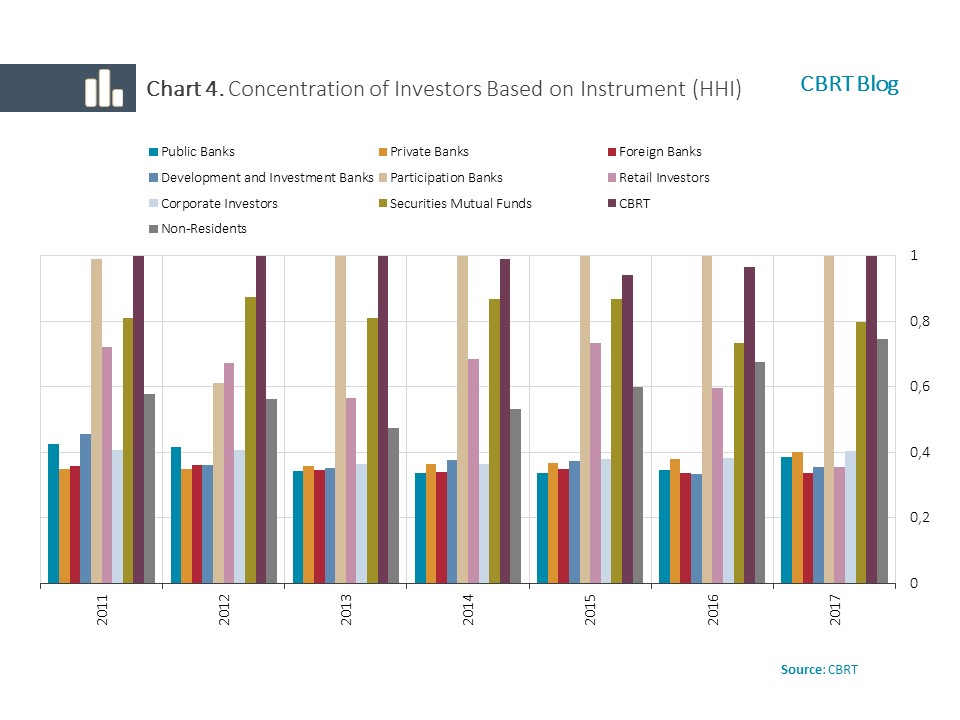 Investor-based concentration of instruments is another measure to be employed in analyzing the resilience of the domestic debt stock. An analysis of its course over years indicates a balanced composition of fixed-rate, floating-rate and CPI-indexed government bonds among investors (Chart 5). 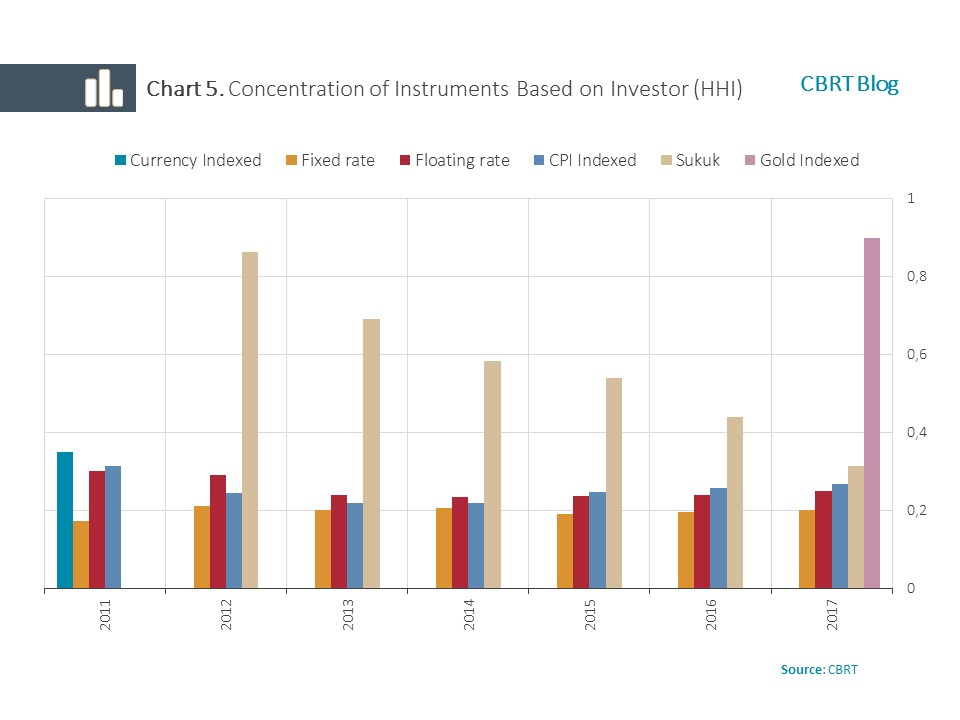 [1] A one-to-one comparison between South Africa and Turkey is not possible on an instrument basis since South Africa has only fixed-rate and CPI-indexed bonds as domestic debt instruments.

[3] It should be noted that investors’ instrument preferences may also be influenced by the primary dealership system and similar regulations.

[6] Moreover, it should be noted that the ratio of domestic debt stock to GDP is approximately 28 percent in Turkey whereas this ratio is above 50 percent and 80 percent in South Africa and Brazil, respectively.

Mehmet Kasım Tırpan is a Central Bank Specialist at the CBRT.

Serap İnci Özyer is a Researcher at the CBRT.