In 2017, banks expanded their deposit base on the one hand and used alternative funding sources on the other. In the upcoming period, continued diversification of funding sources will contribute to both financial deepening and the decline in funding costs.

In 2017, rapid credit growth was observed owing to loans guaranteed by the Credit Guarantee Fund (CGF). Loan growth was mostly funded by deposits, which are banks’ major source of funding. Shareholders’ equity significantly contributed to core funding underpinned by strong profitability. Meanwhile, the increase in TL loans extended in the scope of the CGF guarantee led to a rise in the TL funding requirement of the banking system and banks covered part of their TL liquidity needs with alternative funding sources (Chart 1). Syndicated loans, securitization loans as well as bilateral loans, and security issues were the primary sources of non-deposit funding. 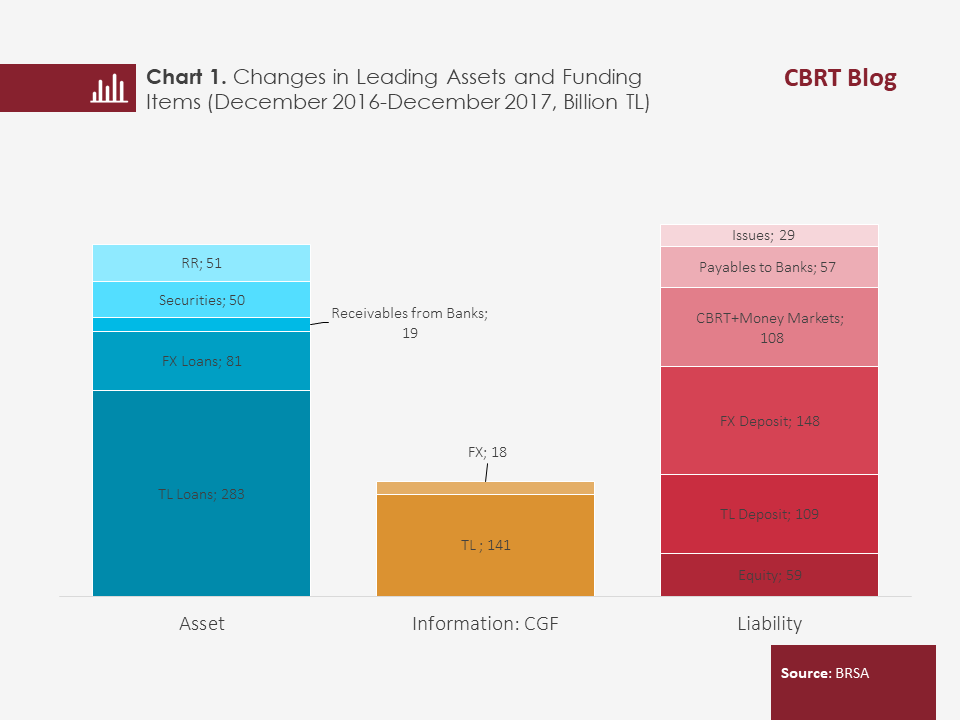 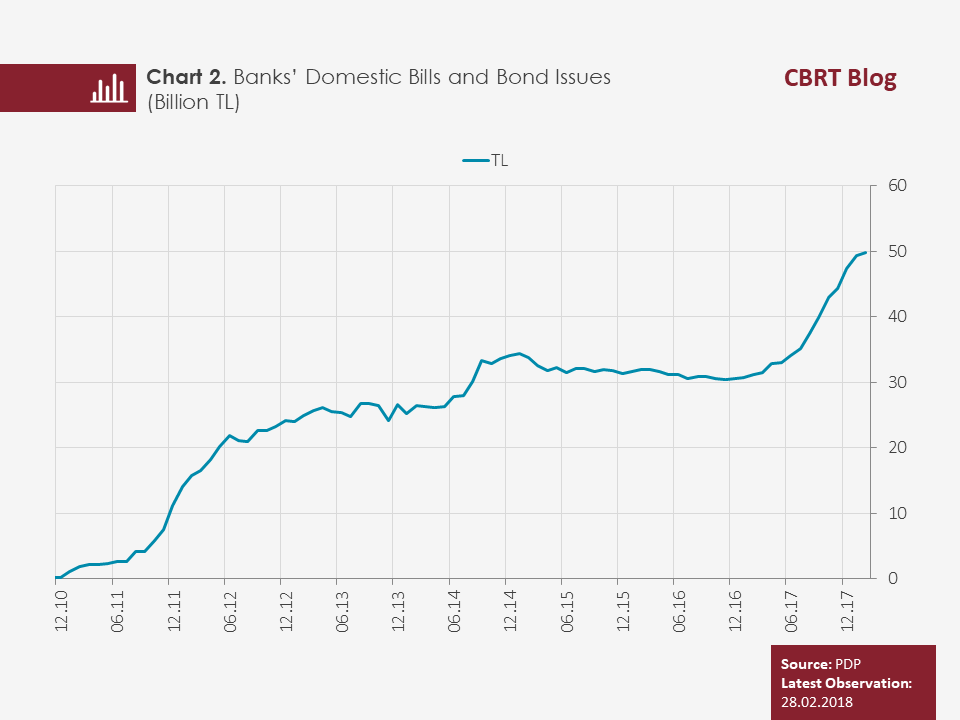 In TL denominated bond issues abroad, banks opted for mortgage-backed securities through the private placement selling method. Mortgage-backed securities (MBS) are a relatively new instrument for banks[1]. In 2015, banks started to establish MBS programs and the first issue took place in the same year. In issuing covered bonds the assets for collateral remain on the issuer bank’s balance sheet. Thanks to this protection, covered bonds provide a cost advantage for the bank. Moreover, as these instruments have a lower credit risk, they are more attractive for investors and offer an advantage for banks with respect to investor diversity. For this reason, covered bonds are important instruments helping banks to diversify their funding sources and borrow cost-effectively. The main reasons for banks to prefer covered bonds are: housing loans are collateralized, their non-performing loan ratio is less than 1 percent and the collateral for the loan is long-term as these loans are long-term. Moreover, the fact that collaterals (housing loans) are TL-denominated and covered bonds are mostly TL-denominated eradicates exchange rate risk.

A noteworthy development regarding domestic bond issues is that banks issued TL-denominated subordinated bonds for the first time. These borrowings, which are long-term, provide an alternative investment instrument for domestic investors. This is also an important step for the deepening of the national capital market. Bond issues amounting to TL 3 billion reinforced the capital adequacy ratios of issuing banks by 30 to 145 points by acting as Tier 2 capital. Subordinated issuances that do not qualify for Basel III criteria are gradually excluded from the calculation of regulatory capital[2] and there may be an increase in Basel III-compliant subordinated debt during the transition to Basel III minimum capital ratios that will last until 2019. Rising capital adequacy ratios are also important with respect to supporting the lending capacity of banks. 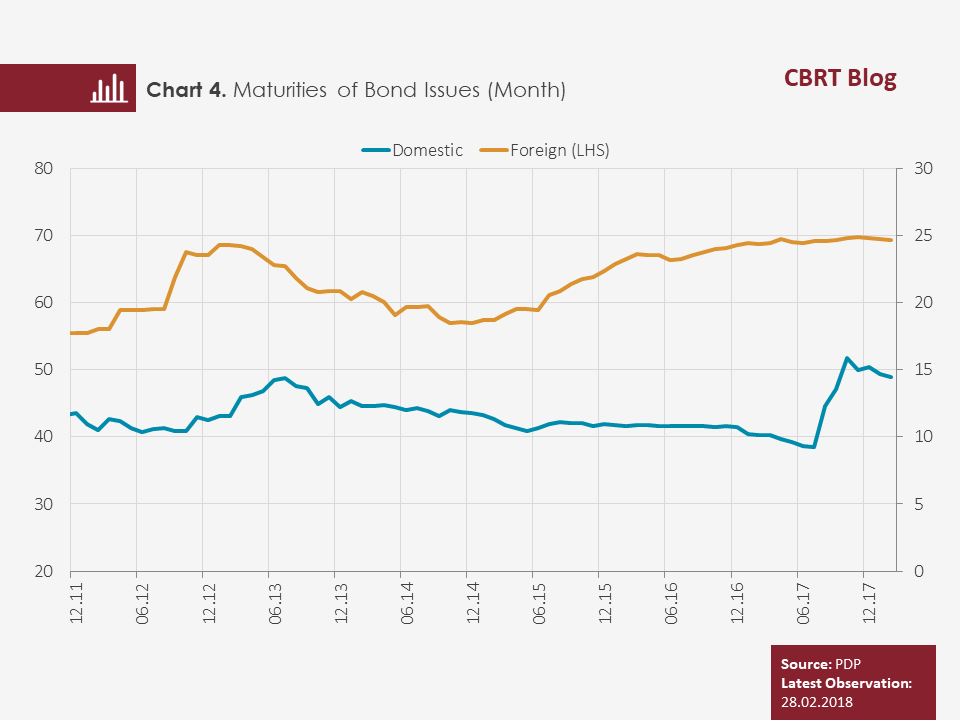 In tandem with the increase in bonds issued both domestically and abroad, maturities have been extended significantly. The maturity of bonds issued abroad has been extended by 12 months since end-2014 and reached 70 months. The maturity of domestic bonds, which has been around 10-11 months over the last few years, rose to 15 months with the effect of subordinated TL-denominated bonds in 2017 (Chart 4). Long-term borrowing is expected to be a more important source of funding, once the net stable funding ratio[3] which requires banks to maintain stable funding becomes a minimum standard. In this context, it can be predicted that long-term bond issues will continue depending on the market conditions.

As a result, in 2017, banks expanded their deposit base on the one hand and used alternative sources of funding intensively on the other. Extension of maturities of TL funding resources with non-deposit instruments is considered as an element reinforcing banks' asset-liability maturity matching. Last year, when the TL loan-to-deposit ratio rose, long-term funding sources contributed positively to banks’ funding composition. Domestic subordinated bond issues and TL-denominated bond issues abroad curbed the increase in the on-balance-sheet open position, while affecting bank balance sheets positively with respect to capital adequacy. In the upcoming period, continued diversification of funding sources will be important for contributing to both the financial deepening and the decline in the funding costs.

[1] Principles on covered bonds were first published in 2007. In 2014, amendments were made to the principles in the framework of the new Capital Markets Law, the private placement selling method was introduced in addition to the methods of public offerings and offer to qualified investors. http://www.resmigazete.gov.tr/eskiler/2014/01/20140121-14.htm

[2] According to the Regulation on Banks' Equity, capital items issued before 2014 that do not meet the Basel III criteria are taken into account in regulatory capital with 20 percent deduction while increasing the deduction rate by 10 percent for each subsequent year after 2014. Accordingly, in 2018, 40 percent of the said subordinated debts are taken into account in the calculation of regulatory capital.

[3] The Net Stable Funding Ratio is a liquidity ratio developed under Basel III. The rate aims to reduce the excessive dependence of banks on short-term wholesale funds by encouraging a long-term, deposit-based funding structure. For more information, please visit: https://tcmbblog.org/en/a-new-era-in-liquidity-management-in-banking-sector-net-stable-funding-ratio/