Catch-Up in the Turkish Manufacturing Industry: The Role of National and Regional Frontiers

Turkish manufacturing sector frontiers in terms of productivity are generally export-oriented large-scale firms with high turnover. These firms invest in technology and R&D. Laggards increase their productivity by learning from regional and national frontiers and/or by adapting the frontiers’ technologies according to their needs.

Productivity can be defined as the capacity to produce the same amount of output by using a smaller amount of inputs. Technology and innovation are the key drivers of productivity. Productivity gains obtained by new technology and innovation play a significant role in sustainable economic growth and increased prosperity. However, an increase in productivity can be achieved not only by the production of new technologies but also by the adaptation of new technologies invented elsewhere to production processes. Briefly, a productivity increase depends on the spillover of new ideas as much as it depends on the creation of these ideas. 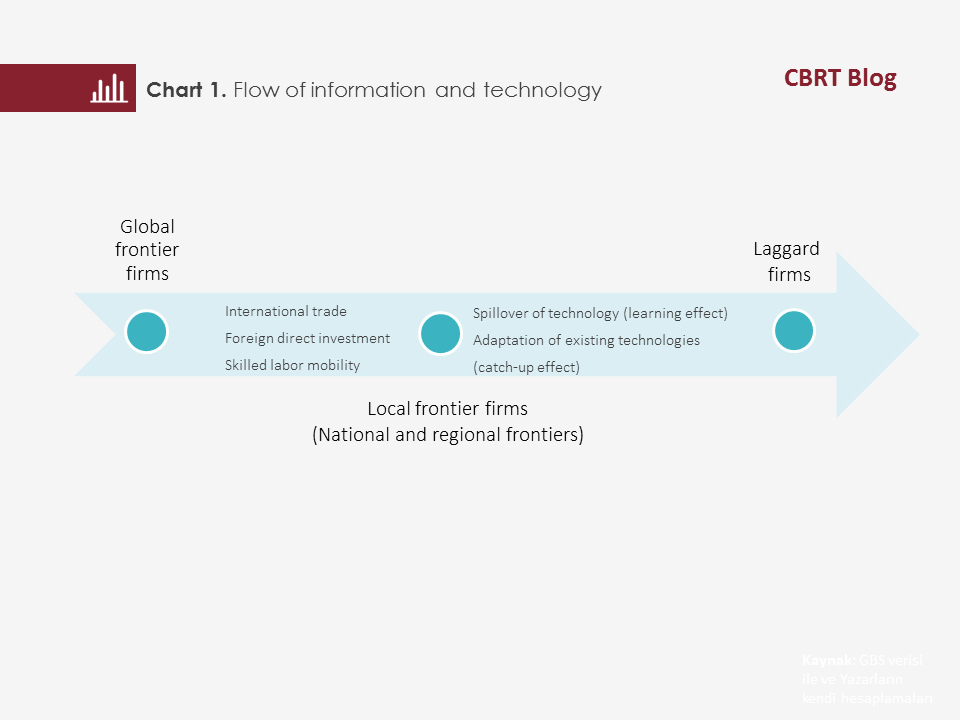 Although Turkey does not have global frontiers yet, it has successful frontier firms that transfer innovative technologies via foreign trade activities and foreign direct investments. This blog post focuses on the role of local frontiers in the productivity growth of laggards in the Turkish manufacturing industry[1].

In the first stage of the study, manufacturing industry firms are divided into three groups according to their productivity levels:[2]

Laggards account for an average of 80 percent of the sample in the study. The average number of employees is 35 for frontiers and 22 for laggards (Charts 2 and 3). 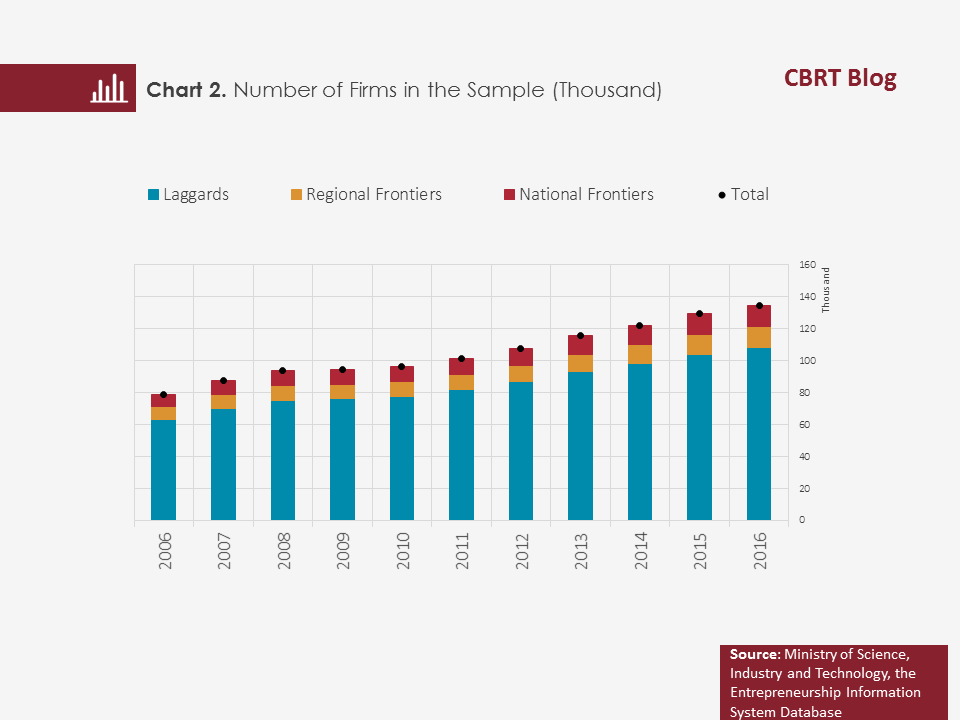 The share of frontiers in total employment is limited to 27 percent due to the small number of firms while their share in total turnover is more than 50 percent (Charts 4 and 5). 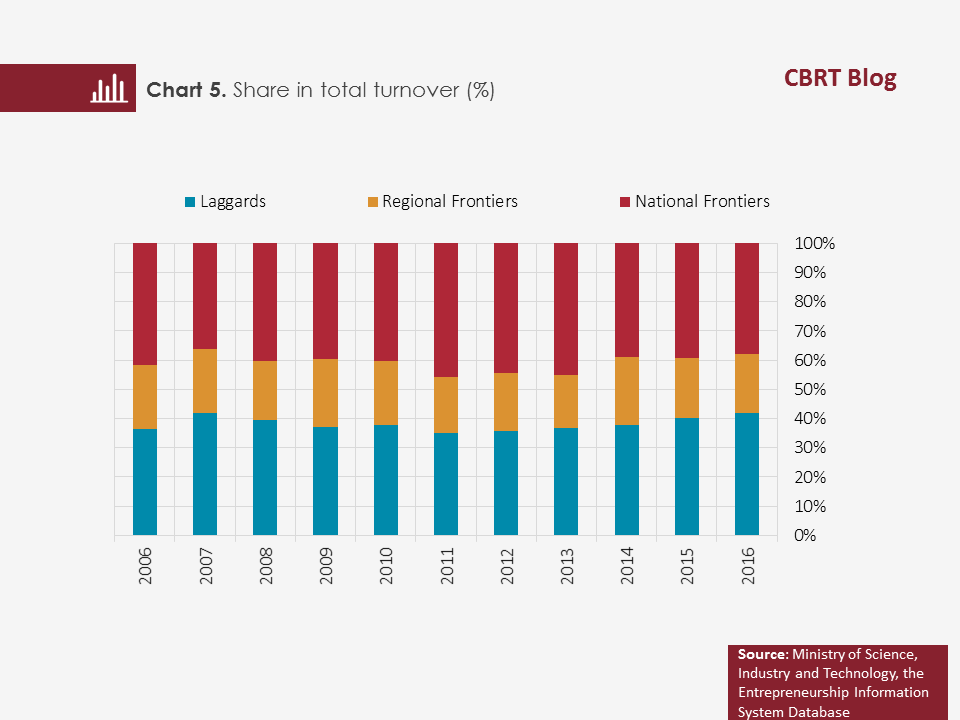 Similar to the case for turnover, shares in export revenues are also dominated by frontiers, with approximately 70 percent of exports performed by them (Chart 6). In terms of export ratios, exports make up 10 percent of frontiers’ sales on average whereas this ratio is approximately 6 percent for laggards (Chart 7).

Approximately 67 percent of the manufacturing industry’s total spending on R&D belongs to frontiers, which once again confirms the correlation between R&D and productivity (Chart 8). 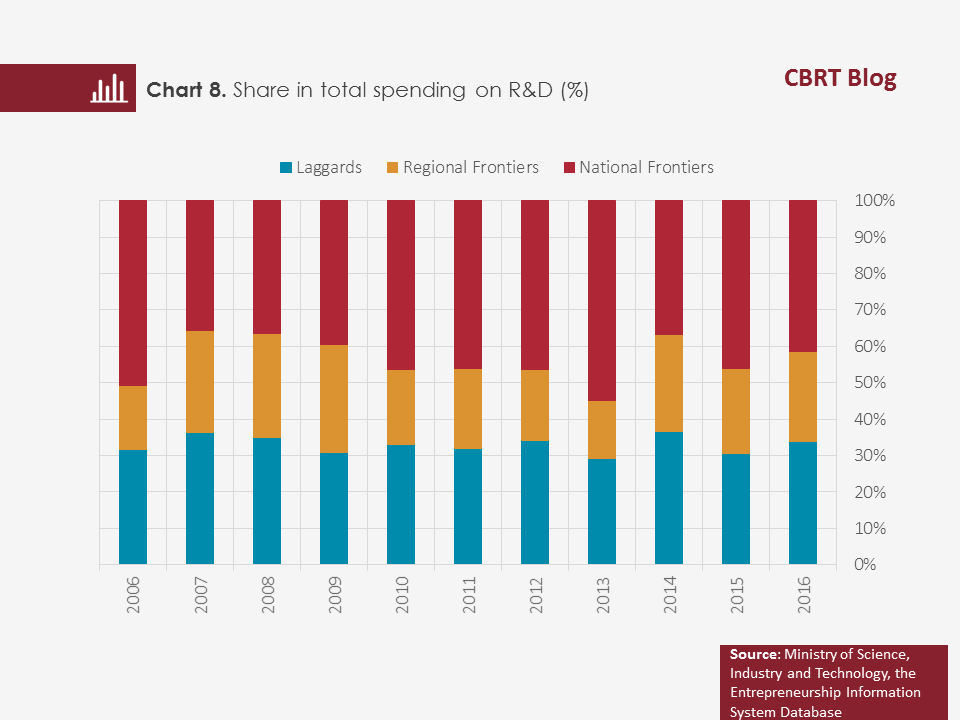 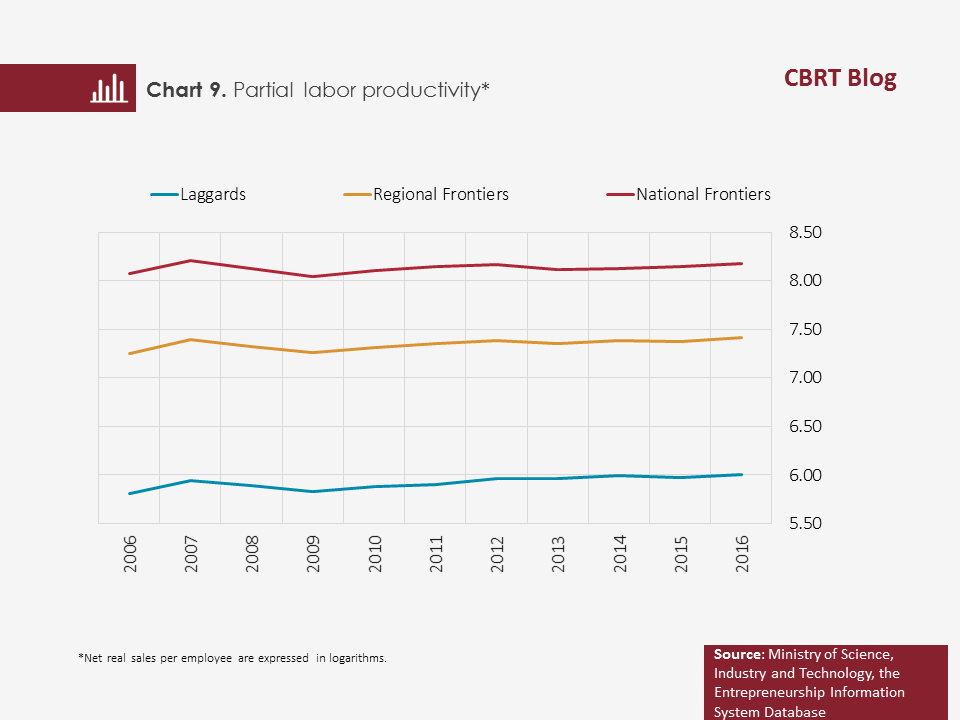 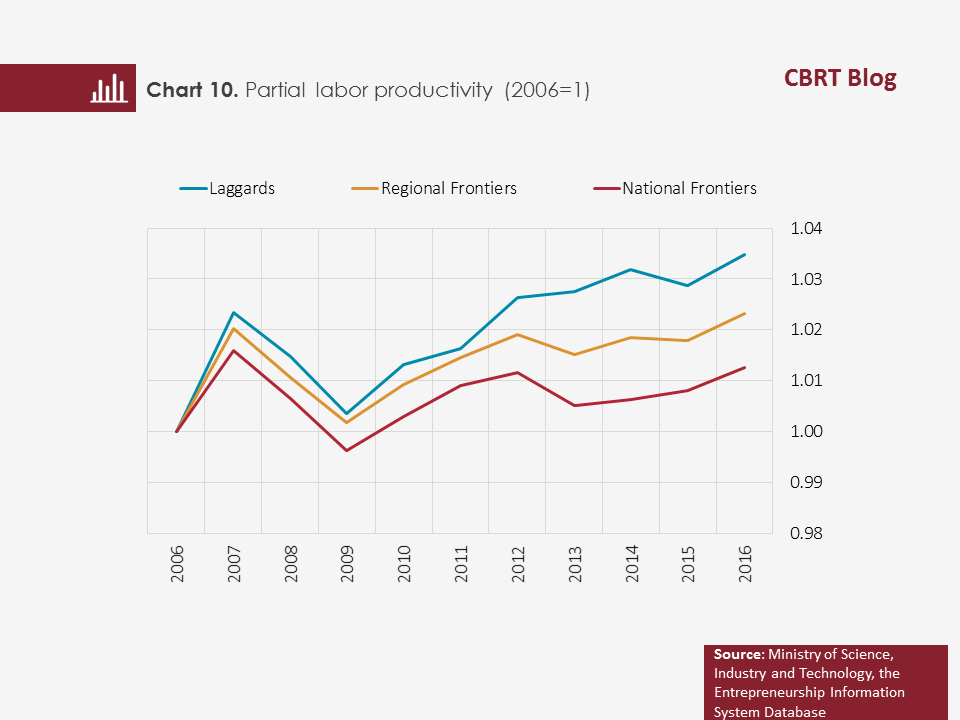 In the final part of the blog post, the results of the World Economic Forum’s (WEF) 2016-2017 Global Competitiveness Report are evaluated in terms of productivity, and innovative suggestions for increased spillover of technology are presented in subtitles.

The association between human capital and productivity is now a known fact. According to the WEF’s 2016-2017 Global Competitiveness Report, while Turkey ranks lower in the education pillar than advanced economies such as the EU and US, it performs better than other emerging economies. However, according to sub pillars, Turkey falls behind other emerging economies in terms of the quality of education (Chart 11).

The importance of infrastructure for growth and productivity is recognized by both researchers and policymakers. According to the WEF’s report, the quality of road and airport infrastructure in Turkey is better than many countries including EU countries but the same is not true for the quality of railroad and seaport infrastructure. On the other hand, Turkey ranks behind other emerging economies, including China, in terms of the quality of electricity supply (Chart 12). A significant portion of power shortages caused by infrastructure deficiencies is an outcome of the dependence of energy generation and consumption predominantly on natural gas and coal. Diversifying electricity generation sources may positively affect the productivity of manufacturing industry firms by facilitating better management of the generation-consumption balance. 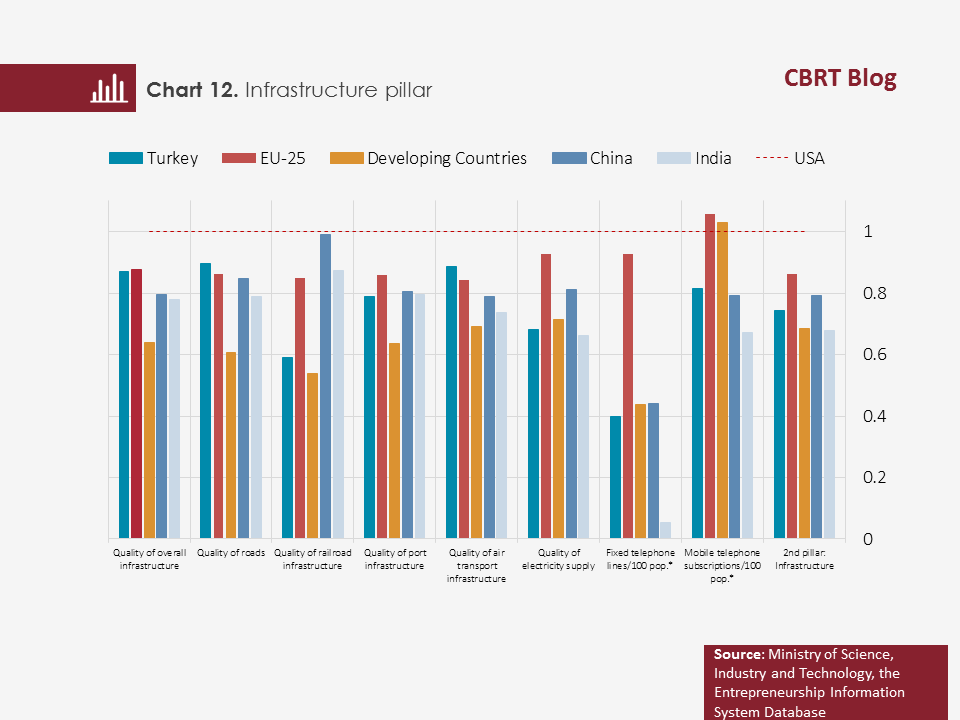 Innovation pillar findings reveal that the Turkish manufacturing sector has a long way to go in terms of innovation and technology. Western countries take the lead in this field. In the block of emerging economies, Turkey ranks low in terms of the quality of its scientific research institutions, company spending on R&D, and university-industry collaboration in R&D (Chart 13).

Policies to strengthen the collaboration between universities and industry constitute an important step towards the establishment of a sustainable innovation ecosystem. The Turkish firms’ appetite for R&D is lower than that of other countries. Increasing the incentive mechanisms for public investments in technology and R&D will reinforce frontiers on the one hand, and offer an opportunity for laggards to boost their productivity on the other hand.

To sum up, Turkish manufacturing sector frontiers in terms of productivity are generally export-oriented large-scale firms with high turnover. These firms invest in technology and R&D. Laggards increase their productivity by learning from regional and national frontiers and/or by adapting the frontiers’ technologies according to their needs. The learning and catch-up performance of laggards in the manufacturing sector offers significant opportunities for sustainable economic growth. On the other hand, an improvement in the technology and innovation ecosystem will bolster the productivity of local frontiers in the first place and subsequently the productivity of laggards. There is significant room for improvement in human capital, infrastructure and innovation capacity issues, which are closely associated with productivity.

[1] This study is conducted using the Entrepreneurship Information System database of the Ministry of Science, Industry and Technology. It includes 254,465 institutions and firms in the manufacturing industry sector that declared an electronic balance sheet and income statement between 2006 and 2016.

[3] The regional classification is based on NUTS 1.