Although different financial stress periods have distinctive dynamics, the historical course of external debt rollover ratio can act as a reference in assessing the current situation.

Increased protectionist policies on a global scale and normalization processes in advanced economy monetary policies play a determining role on the risk appetite particularly towards emerging economies. In addition, financial and geopolitical developments also affect conditions for banks’ access to international markets. The course of the amount and conditions (maturity and cost) under which banks access external funds is important in terms of the continuity of their intermediation capacity. External debts account for approximately 55 percent of the sector's non-core liabilities and relate mostly to banks' liquidity structures and domestic credit supply conditions as well as the conditions of pricing and competition in the deposit market. In this context, this box analyzes the historical development of the Turkish banking sector's external debt rollover ratio.

Global developments are the leading determinants of banks' external debts. Banks can obtain funding from abroad by way of financial instruments such as bilateral loans, syndicated and securitization loans, repurchase agreements, subordinated loans, deposits or issues. Such types of borrowing have peculiar dynamics, yet are based on long-established commercial relationships among banks. Moreover, factors such as banks' partnership structures, credit ratings, past borrowing performances and potential cooperation opportunities may also have a role in provision of these funding sources. 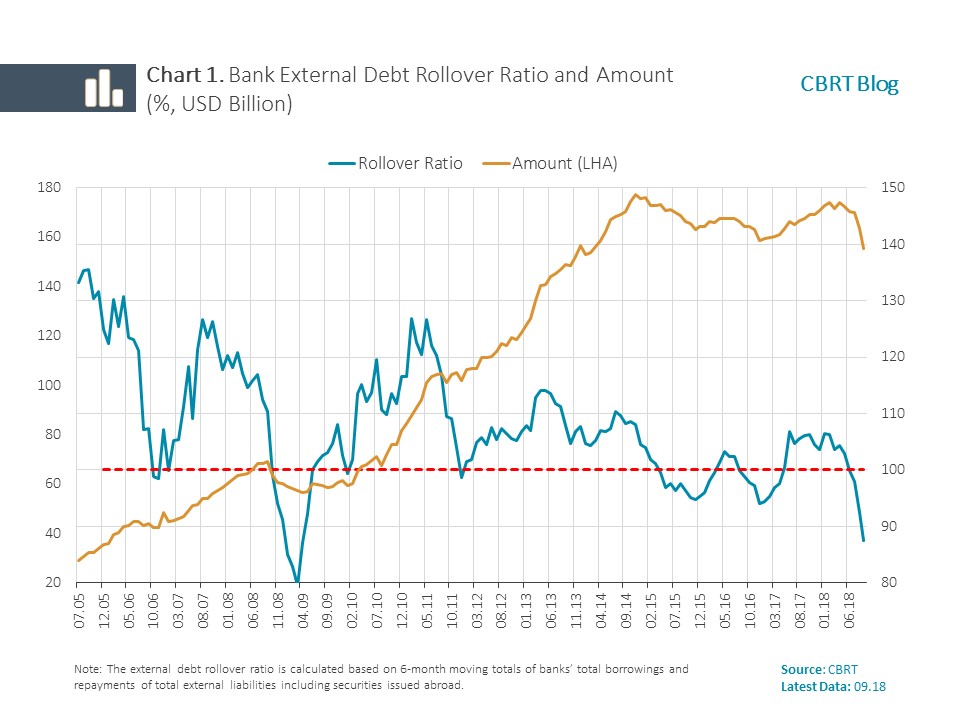 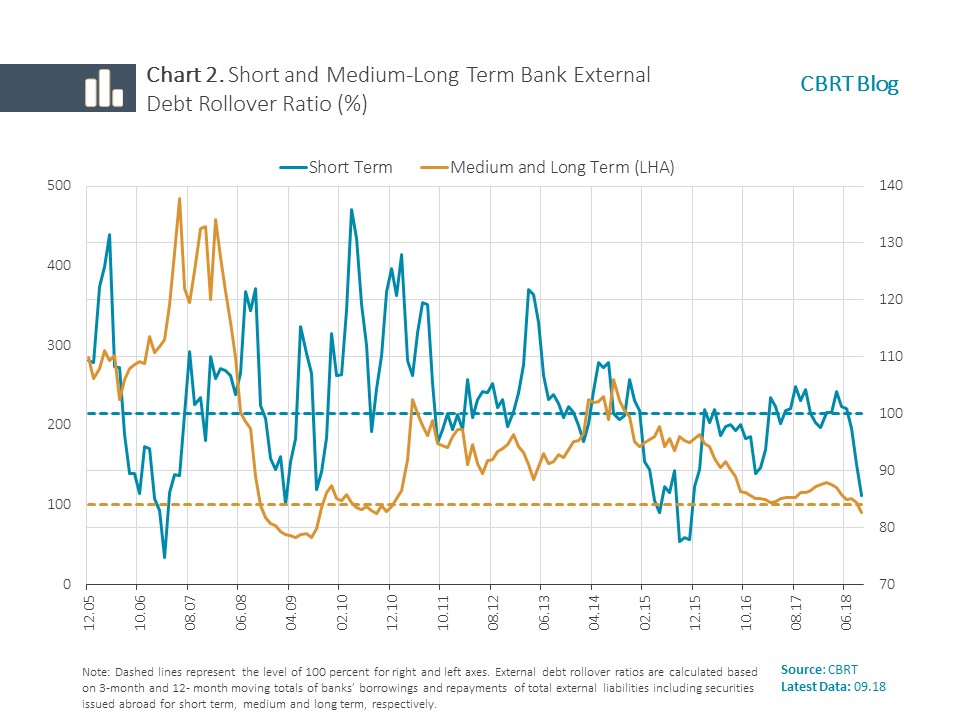 Following this period, the external debt rollover ratio hovered above 100 percent for a long time due to looser global liquidity conditions on the back of quantitative easing policies implemented by advanced economy central banks. Global liquidity conditions started to tighten in response to the Fed's normalization steps that were signaled for the first time in May 2013 and implemented from 2015 onwards. With the effect of the volatility seen in domestic investment appetite in this period, banks' demand for external funding showed a cyclical weakness. Due to both supply-side and demand-side factors, the external debt rollover ratio fell below 100 percent, albeit to a limited extent, during some periods after 2015.

The external debt rollover ratio of the banking sector has declined below 100 percent since August 2018. A number of developments including credit rating agencies' decisions on Turkish banks' credit ratings caused some cost pressures, followed by an increase in margins applied to the loans obtained. However, a rollover ratio of above 100 percent for syndicated loans that have already matured in this period signals that banks' debt rollover capacity has remained strong despite increased costs of access to foreign funding.[2] Furthermore, liquidity buffers held by banks for adverse risk scenarios are at a sufficient level and banks' liquid asset portfolio including FX-denominated required reserves is more than enough to cover all their FX-denominated external debts due in one year.

During the 2008 crisis, the major financial stress period that dominated the entire globe after 2005, both the supply conditions of lender international banks and the external funding demand of domestic banks were affected adversely. Considering the historical development of the Turkish banking sector's external debt rollover ratio and the recent developments together, it is assessed that an external debt rollover ratio of above 80 percent during the 2008 crisis might also constitute a base for periods of tighter global supply or country-specific conditions.[3] In other words, concerning external debts that are a significant aspect of the banking sector's integration with global economy, banks' long-established commercial relationships with foreign banks based on creditworthiness may constitute a reference for access to foreign funding for the following periods.

As debt types depend on a variety of debt-specific factors, they can show divergence as to whether they are rolled over or not during times of financial stress. Charts 3 and 4 show the share of the types of external debts in total external funds and their rollover ratios, respectively. Of external debts, 34.7 percent are obtained in the form of bilateral loans that are largely based on commercial relationships between lending and borrowing institutions as well as past on borrowing performance. The rollover ratio of syndicated loans that are indicative of foreign corporations’ supply conditions and domestic banks’ capability to access international funds declined to 62 percent during the 2008 crisis. Nevertheless, syndicated loans have a low share in total external sources of funding and they can be obtained from participating corporations with an increasingly wide geographical distribution, which contain the risks mentioned. Deposits obtained from abroad, which account for 11 percent of these funds, have been on a stable path throughout the entire period. As funds obtained through repurchase agreements are market-based sources, they are susceptible to financial developments and their rollover ratio declined to 74 percent during the 2008 crisis. Accordingly, it is assessed that risks inherent to repurchase agreements are contained by the limited share (5.4 percent) of external funding obtained via this instrument and the extension of its average maturity up to 35 months due to the CBRT’s measures[5]. And the fact that average maturities of issues, securitization and subordinated loans were 5.8, 8.4 and 10.4 years, respectively, as of September 2018, is considered supportive of the resilience of these funds to potential cyclical financial stresses. Moreover, subordinated loans are less sensitive to market developments as they are based on partnership relations among banks. This should also be noted as a key factor that limits the risks in question. 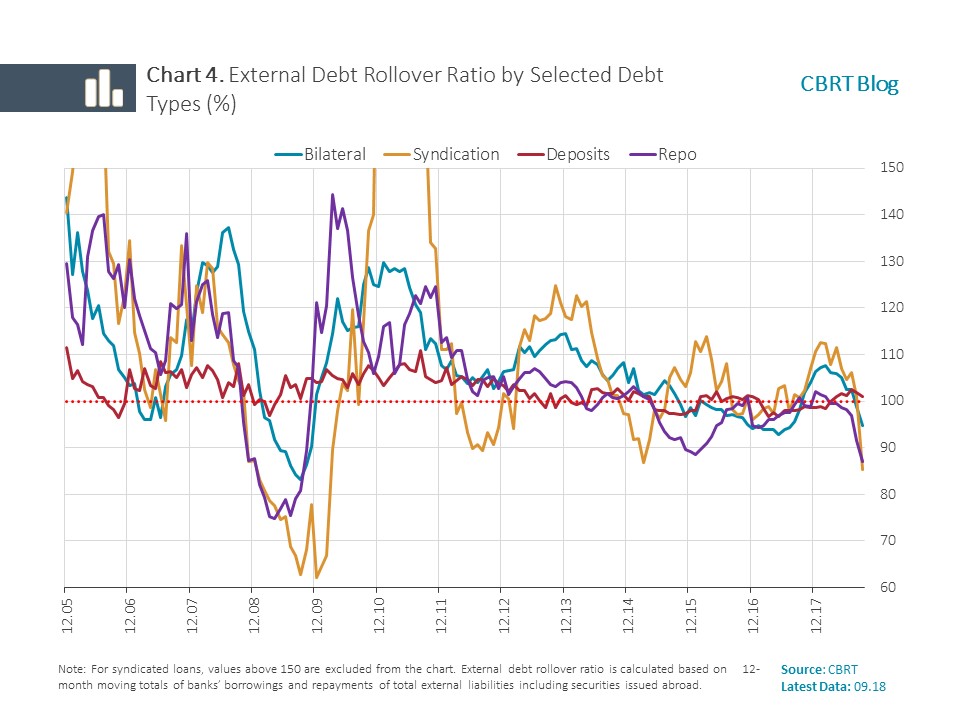 Charts 5 and 6 illustrate how conditions of access to external funding evolved on the basis of bank groups and scales. The bank groups did not show a significant divergence during financial stress periods, which is a testimony to the Turkish banking sector's strong capability to access external funding as a whole. 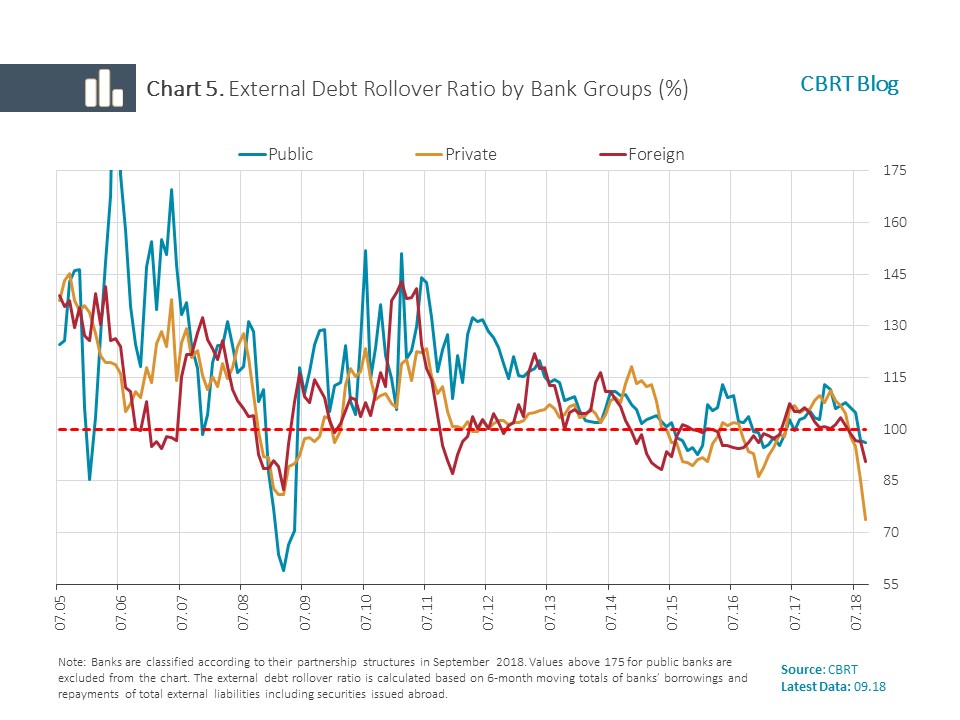 Recent developments underline the importance of regional diversity in the sources of external funding. Charts 7 and 8 show the development of rollover ratios of debts obtained from different regions. The rollover ratio of debts obtained from traditional financial centers such as the US, the UK and the euro area follow a similar path as those obtained from other countries. This confirms that borrower country-specific factors and global liquidity conditions constitute the main determinant of loan flows regardless of the region[6]. 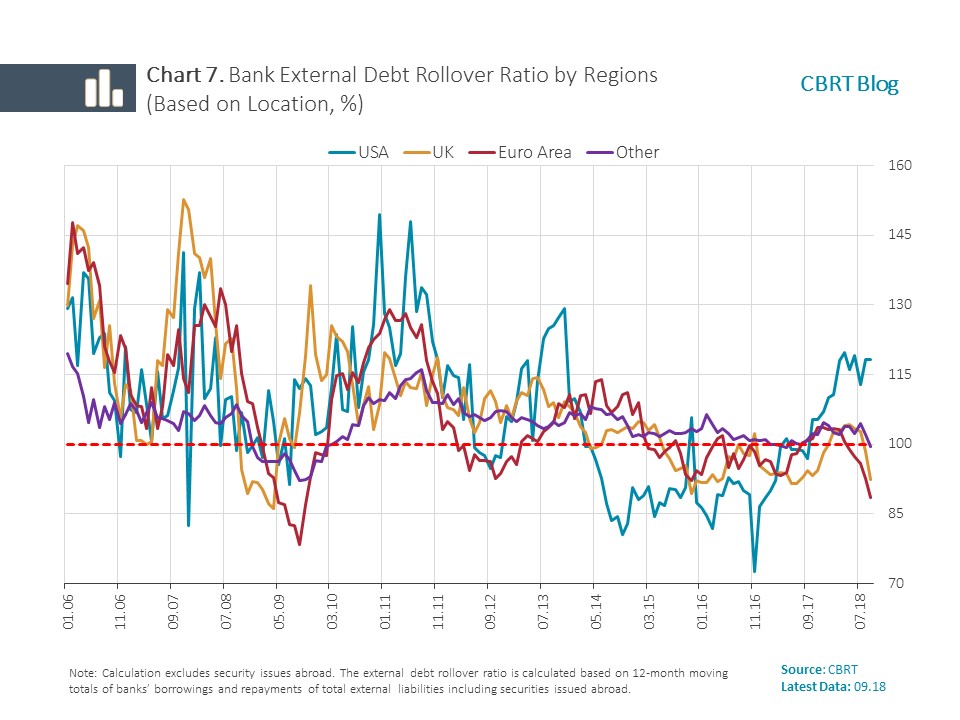 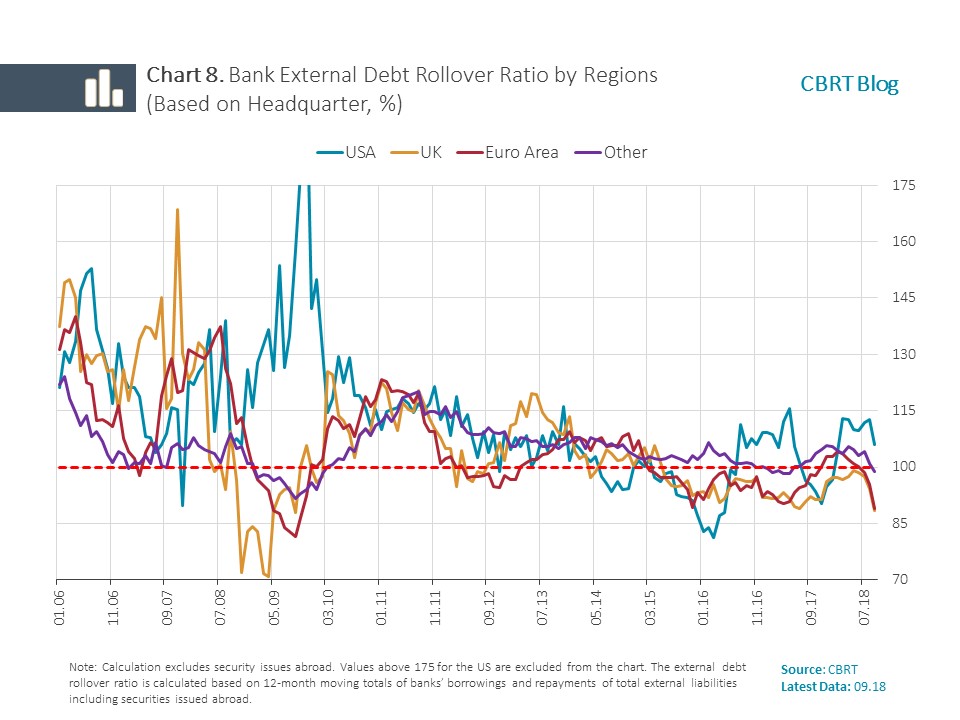 In conclusion, banks' external borrowings show cyclical volatilities due to domestic and international developments. The sector's external debt rollover ratio hovered above 80 percent even during the 2008 global crisis. In addition to economic and financial developments, the borrowing product as well as the history and volume of relationships among financial corporations are also among the determinants of external borrowing. In this context, although different financial stress periods have distinctive dynamics, the historical course of external debt rollover ratio can act as a reference in assessing the current situation.

[1] A rollover ratio at or above 100 percent denotes banks' minimum capacity to rollover their due debts.

[2] The share of syndicated loans in total external debt was 11.2 percent as of September 2018, which is indicative of banks' capacity to access international markets (Chart 3).

[3] It should be noted that different financial stress periods have distinctive dynamics. Although conditions may change, effects of financial stresses on an economy can be measured based on certain parameters. As a matter of fact, the extreme values recorded by Turkey-specific basic variables during the 2008 global financial crisis (October 2008 - September 2009) were: -4.0 percent posted for quarterly growth rate, 12.0 percent for inflation rate, 14.8 percent for unemployment rate and 829 posted for 5-year maturity CDS premium.

[4] Effects of the CBRT's reserve requirement policies on banks' external debts are discussed in the blog post "The Impact of Reserve Requirement Policies on the Maturity of Banks' External Debts" published in the CBRT blog.

[5] As of October 2008, external funding via repurchase agreements had a share of 8.4 percent and an average maturity of 15.1 months.

[6] The CBRT Blog post “More Countries, Less Risk: The Changing Regional Distribution of Cross-Border Bank Loans” analyze the impacts of increasing diversification in the countries/banks that provide funds to the Turkish banking sector on the sensitivity of cross-border bank loans to the global liquidity conditions.