The methodological change in the weight structure of seasonal products is likely to cause fluctuations in core inflation via clothing and footwear prices. Therefore, in order to be able to make a healthy evaluation of the underlying trend of inflation, it would be wise to take into account the indicators adjusted for these effects for 2017 as it is a transition year.

In January 2017, a change was introduced for the weighting system used to incorporate seasonal fresh fruits and vegetables and clothing and footwear products in the consumer price index. The “variable weight” method in which seasonal products have different weights each month was abandoned and the “fixed weight” method, which is recommended by Eurostat and allocates the same weight to each product each month, was introduced.[1] This methodological change is causing a transitory volatility in the consumer prices index that is peculiar to 2017. This has a significant impact on the core inflation outlook via the clothing and footwear group. Therefore, in order to be able to make a healthy evaluation of the underlying trend of inflation, it would be wise to take into account the indicators adjusted for these transitory effects for 2017 as it is a transition year.

First, let us give some brief information on the variable weight and fixed weight terms with examples from the clothing and footwear group. Clothing and footwear are supplied to the market according to consumers’ demand shaped by seasonal conditions. For instance, while coats are mostly demanded in autumn and winter, t-shirts are mostly demanded in spring and summer. In the variable weight system, the relative weights of seasonal products used to change from month to month. With the fixed weight method, however, the relative weights of seasonal products in the index will not change throughout the year.

This impact is particularly important for clothing and footwear products because the seasonality in clothing group is more regular than that in fresh fruits and vegetables. Therefore, base effects driven by changing seasonality on annual apparel group inflation are observed more rarely. However, by the nature of the methodological difference, clothing and footwear price indices calculated by fixed weight and variable weight methods do not have the same seasonal structure (the same monthly change). For this reason, uniquely to the current year, 2017, some significant base effects will be observed in the annual inflation of the clothing and footwear group. This will also have remarkable impacts on the underlying trends of core inflation indicators. As of 2018, this mechanical impact will fade out.

How is the Weighting System-Driven Differentiation in Monthly Clothing Inflation? 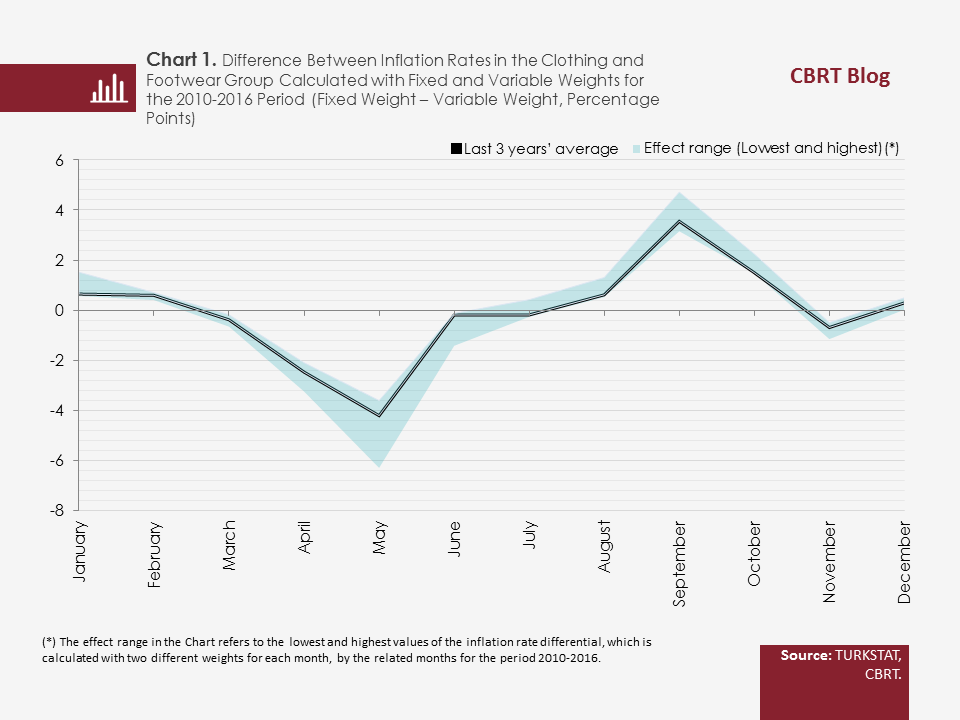 An analysis of the difference between the monthly inflation rates calculated with these two methods for the period 2010-2016 reveals that the fixed weight offers a distinct seasonal structure compared to the variable weight (Chart 1). According to the fixed-weight method, the clothing inflation is lower particularly in April and May and higher in September and October.

What Path Do Underlying Trends Adjusted for the Weighting System Effect Follow?

The relatively higher share of clothing and footwear prices in B and C indices (10.6 percent and 12.7 percent, respectively) necessitates an adjustment for weighting system effects to get a more accurate analysis of the underlying trend of inflation. We are making the variable weight adjustment for 2017 over the related month’s last three-year averages of the effects shown in Chart 1. Calculations suggest that the effect of the change in method in the clothing and footwear group stands out in the slowdown in main inflation indicators in April and May. As a matter of fact, when calculations are adjusted for this effect, the underlying trend of inflation increases in April whereas it falls very slightly in May (Chart 2 and 3). Moreover, findings also indicate that, contrary to the April-May period, the underlying trend of inflation may rise in September and October as a result of the same methodological change and that adjusted underlying trends should be taken into account for a realistic evaluation.

To sum up, paying attention to the effects triggered by the weighting system change in the clothing group in this transition year of 2017 is very important for a sound evaluation of both the annual inflation and the underlying trend of inflation. Taking account of these effects, the recent improvement in core inflation trends seems very moderate still. However, the methodological change may lead to upside effects on the underlying trend of inflation in September and October. These effects should be considered while evaluating the inflation outlook. On the other hand, it should be noted that such effects arising from the methodological change will disappear as of 2018.