Among the measures recently taken in emerging economies against the foreign currency exposure of the corporate sector, decisions by the central banks of India and Indonesia stand out.

Samet Battal is an Assistant Central Bank Specialist at the CBRT.

Exchange rate risk can be defined as a type of market risk stemming from foreign exchange positions of economic entities in the case of appreciation or depreciation of the local currency against foreign currencies.

Accommodative monetary policies adopted by the central banks of advanced economies in the aftermath of the global financial crisis in 2008 reduced the borrowing costs of emerging economies and pushed up the FX liabilities of non-financial companies in particular.

The normalization of monetary policies in advanced economies leads to depreciation in emerging economies’ currencies and a surge in exchange rate volatilities. This, in turn, brings up the issue of fragilities of the non-financial sector which has balance sheet imbalances deriving from currency mismatches.

Among the measures recently taken in emerging economies against the foreign currency exposure of the corporate sector, decisions by the central banks of India and Indonesia stand out.

In 2014, the Reserve Bank of India (RBI) introduced incremental provisioning and capital requirements to banks in the face of the increase in foreign currency liabilities of companies and the heightened probability of default caused by sudden movements in the exchange rate. The methodology announced on 15 January 2014 is composed of three stages:

The RBI defines the unhedged foreign currency exposure as the gross sum of all items on the balance sheet that have an impact on profit and loss account due to movement in foreign exchange rates. In the calculation of this sum, the RBI employs the relevant accounting standard on provisions and takes into account the items maturing or having cash flows over the period of next five years. Financial hedge and natural hedge are also taken into account in this calculation[1].

Following the calculation of the amount of unhedged foreign currency exposure, the likely loss to be incurred by the economic entity is calculated using the annualized volatilities. For this purpose, the largest annual volatility in the US dollar-Indian rupee rates during the last ten years is taken.

In this framework, the RBI introduced an incremental provisioning requirement to entities based on the ratio of exchange rate risk-driven likely loss to earnings before interest and depreciation (EBID). The higher this ratio, the higher will be the susceptibility of the entity to adverse exchange rate movements. The following table shows the additional incremental provisioning and risk weights calculated based on the likely loss/EBID ratio: 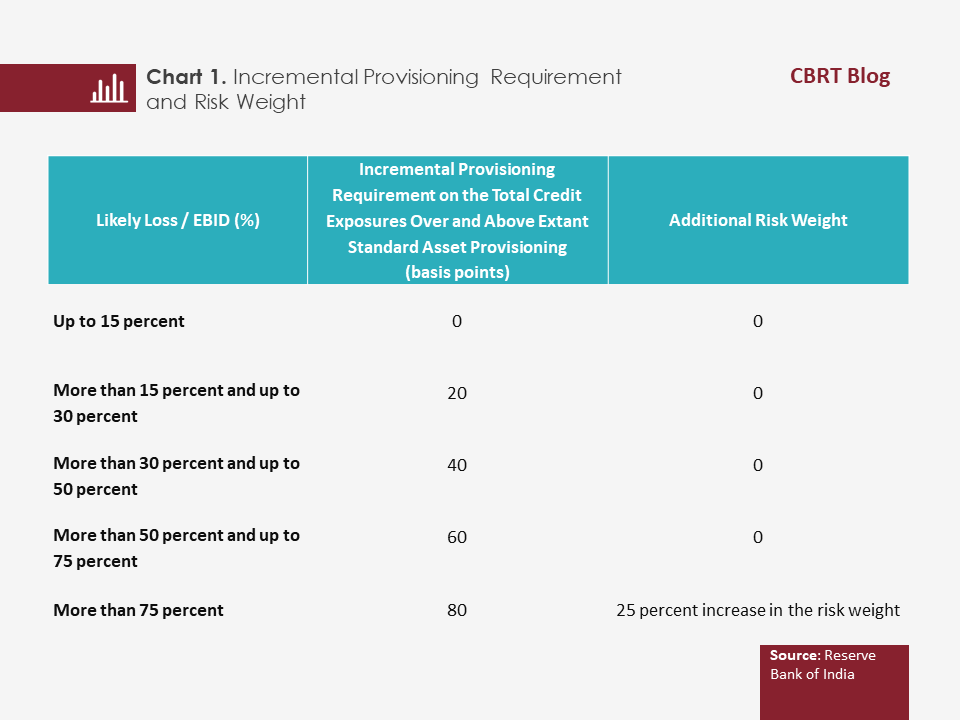 Moreover, the RBI required banks to monitor the amount of unhedged foreign currency exposure at monthly intervals as well as to calculate the incremental provisioning and risk weight rates at least on a quarterly basis. However, it also allowed them to make this calculation at monthly intervals during the periods of high USD-INR volatility.

In 2014, Bank Indonesia (BI) announced that the recently increased foreign exchange debt of the non-bank corporate sector mainly bore currency, liquidity and over-leverage risks. Therefore, in order to provide exchange rate risk hedging for non-bank corporations that have external liabilities, it took a series of measures under three categories:

Corporations were required to hedge 25 percent of the negative balance between their foreign currency assets and foreign currency liabilities with a remaining maturity of up to three months and between three and six months against the exchange rate risk. Nevertheless, non-bank corporations that record financial statements in USD dollars were exempted from the minimum hedging ratio on condition of the fulfillment of the following criteria:

Fulfillment of a credit rating of no less than equivalent to BB-, issued by a rating agency recognized by Bank Indonesia was required. However, a number of offshore loans[2] to non-bank corporations were exempted from this principle.

The examples of India and Indonesia briefly indicate that while additional risk weight and incremental provisioning requirement were imposed to non-financial corporations with elevated levels of foreign exchange short positions in India; the fulfillment of liquidity ratio, hedging ratio and credit rating principles were sought for non-bank corporations with external liabilities in Indonesia.

[1] Financial hedge is ensured through derivative contracts while natural hedge refers to the case where an economic entity with foreign currency debt has revenue in the same foreign currency.

[2] The offshore debts of non-bank corporations exempted from the credit rating principle are: i) Refinancing loans; ii) infrastructure loans with more than 50 per cent participation by international bilateral or multilateral institutions;; iii) infrastructure loans for central and local government projects;- iv) loans guaranteed by international bilateral or multilateral institutions and v) Trade credit

Bank Indonesia (2014), “The Implementation of Prudential Principles in Managing External Debt of the Nonbank Corporation”

Bank Indonesia (2014), “The Implementation of Prudential Principles in Managing External Debt of the Nonbank Corporation (Revision)”

Samet Battal is an Assistant Central Bank Specialist at the CBRT.