To What Extent Are Real Wages Responsive to Business Cycles in Turkey?

Real wages do not have a significant elasticity for the low-wage group which accounts for approximately 25 percent of the workers in the Turkish economy. As for workers who earn more than the minimum wage, real wages are relatively more elastic.

Wage rigidity refers to the poor elasticity of wages in adjusting to economic conditions. This phenomenon is a significant factor affecting the dynamics of the labor market. In cases where wages are above the level that keeps the labor market in balance and do not tend to converge to this level due to rigidity, unemployment may increase. Moreover, wage flexibility may also have implications on issues such as the transmission of economic shocks to inflation and the effectiveness of monetary policy. This means that information on the responsiveness of wages to economic activity bears particular importance for central banks.

Wage rigidity may result from economy-related structural or temporary factors. Causes include factors related to the institutional structure of the labor market such as collective bargaining, unionization and the minimum wage. Other possible reasons include the tendency of employers to pay high wages with the expectation of high performance, consideration of nominal wage cuts as a performance-reducing factor, and the time-consuming nature of wage adjustments.

Wage rigidity is usually associated with a lack of downward elasticity in wages. Accordingly, there may appear asymmetric effects of wage rigidity depending on the state of the economic activity. In cases where wages increase more rapidly in periods of expansion, the growth in employment and the decline in unemployment become more limited and gradual whereas labor cost-driven inflationary pressures escalate more significantly. On the other hand, wages that decelerate more slowly and at a lower rate in periods of contraction cause the adjustment in the labor market to materialize through the channel of employment loss and the fall in working hours. In this case, unemployment increases and the decline in labor costs becomes more moderate.

The response of wages to business cycles cannot be directly measured through aggregated data due to the changes in labor force composition during economic fluctuations. Low-skilled and low-wage workers are the first ones to lose their jobs in periods of contraction, which pushes up the average wages. This compositional change may overshadow the response of wages to shocks on a macro scale. For this reason, the economics literature has opted for micro data-based studies which allow controlling for these compositional effects to single out the wage response.

Such studies suggest that real wages are procyclical. In his study covering eight major Eurozone countries, Verdugo (2015) estimates that a one-point increase in the unemployment rate reduces the real wage growth between 0.6 points and 1 point. This coefficient is higher in studies conducted for the UK and the US where labor markets are deemed more flexible. A one-point increase in the unemployment rate is estimated to reduce the real wage growth by 0.4 points in Spain, which has a high unionization rate.[1]

Findings of Real Wage Elasticity in the Labor Market in Turkey

The institutional structure of the labor market in Turkey contains regulations that may affect the downward rigidity of wages. For example, the minimum wage is a factor causing rigidity at the low end of the wage distribution. The study by Aldan and Gürcihan Yüncüler (2016) analyzes the responsiveness of real wages to business cycles in Turkey for the period between 2006 and 2012 by employing the micro data set from the Survey on Income and Life Conditions published by the Turkish Statistical Institute (TURKSTAT). Although the period under analysis is short, it covers a full business cycle and coincides with the 2008 crisis. The study uses the unemployment rate as a business cycle indicator.

The findings of the study imply that real wages are sensitive to the business cycle and that the wage response is procyclical. Taking into account the individual heterogeneity, it is estimated that a one-point increase in the unemployment rate induces an approximately 0.8 point-decline in real wage growth (Table 1, column 1). [2]

The interaction of institutional regulations with wage flexibility and the implications of this interaction on the economy constitute another important issue. For instance, the exogenously set minimum wage is anticipated to have an impact on wage rigidity. To test this hypothesis, the abovementioned study replicates the estimates for different tranches of the wage distribution. As anticipated, real wages for those earning less than or around the minimum wage are acyclical. Wage cyclicality comes from workers who earn more than the minimum wage, and procyclicality increases as wages rise (Table 1). 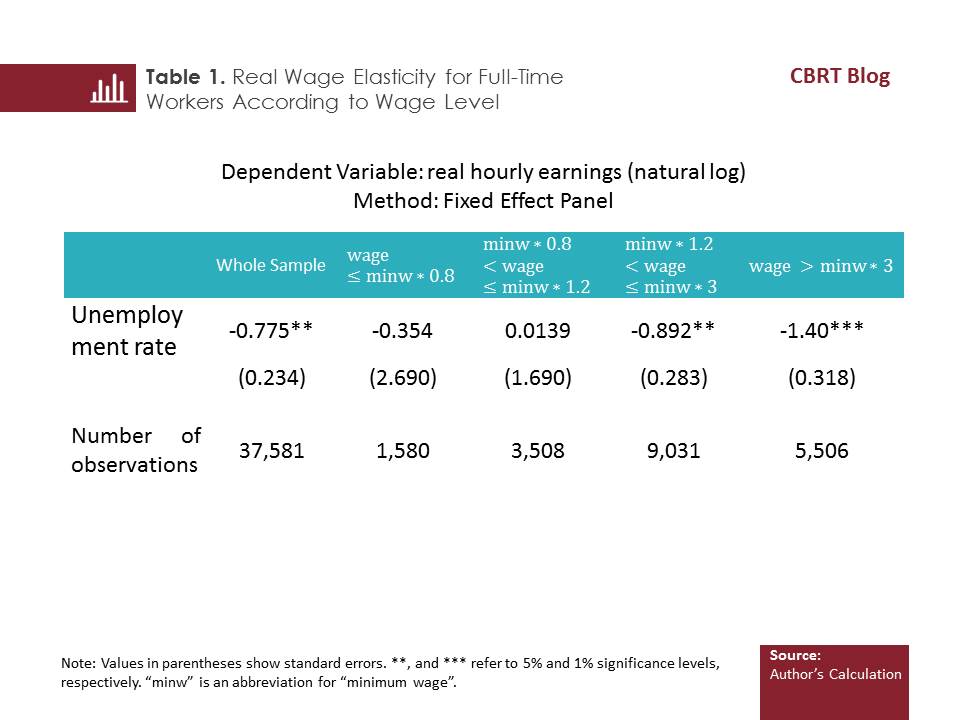 To conclude, real wages do not have a significant elasticity for the low-wage group which accounts for approximately 25 percent of the workers in the Turkish economy. As for workers who earn more than the minimum wage, real wages are relatively more elastic. Wage elasticity offers a framework that reduces inflation through the labor cost channel during periods of contraction. However, it should be noted that different wage groups are affected in different ways. It can be expected that price and wage adjustments will be more moderate whereas employment or working hour adjustments will be more pronounced in sectors with high a share of low-skilled workers. On the other hand, price and wage adjustments can be supposed to be more visible in sectors employing high-skilled workers.

[1] For a more detailed review of literature, see Aldan and Gürcihan Yüncüler (2016).

[2] For methodological details and the method, see Aldan and Gürcihan Yüncüler (2016).

Verdugo, G. (2015), Real Wage Cyclicality in the Eurozone Before and During the Great Recession: Evidence from Micro Data, European Economic Review, vol. 82(C), 46-69.