The discrepancy between the impacts of vocational training programs in different countries and at different times suggests that the content and design of the program is crucial for its effectiveness.

Active Labor Market Policies (ALMP) are defined as labor market policies implemented by governments to place the unemployed in jobs and are widely used all over the world, especially in European countries. In Turkey, the most common form of these policies is vocational training courses (VTC). According to the data compiled and issued by the Turkish Employment Agency (İSKUR), more than 200,000 people benefited from VTC in 2013 and 2014, and almost 170,000 in 2015. In academic literature, there are conflicting findings about the impact of VTC implementations (Kluve, 2010). The discrepancy between the impacts of vocational training programs in different countries and at different times suggests that the content and design of the program is crucial for its effectiveness.

The most important discrepancy between VTC participants’ experiences stems from the characteristics of the firms they are matched to. Among these characteristics, firm size stands out as the strongest variable affecting the success of the program. What we mean by “firm size” is the total number of workers at the firm. The employability and duration of employment of VTC participants who have been matched with bigger firms is significantly higher than those matched with small/medium-size firms.

In ISKUR’s implementation, the matching between VTC participants and firms is carried out randomly in light of the information in the applications. Chart 1 shows failure ratios of VTC participants with respect to the firm size they were matched with, the number of days of  employment and the ratio of employment in firms matched during training. Employment ratios in the firm matched during training and the average employment durations of participants matched with big firms was manifestly higher. Meanwhile, there is no significant difference between failure ratios and this denotes that there is no observable difference in participants’ personal qualifications. In our regression analysis, in which we kept observable variables such as education, gender, age and city constant, we observe that firm size has a meaningful impact on employment durations and employment in the firms matched during training (Akgündüz, Balkan and Tümen, 2016). Keeping in mind that the firm-participant match is random, we can conclude that there is a causal relationship. 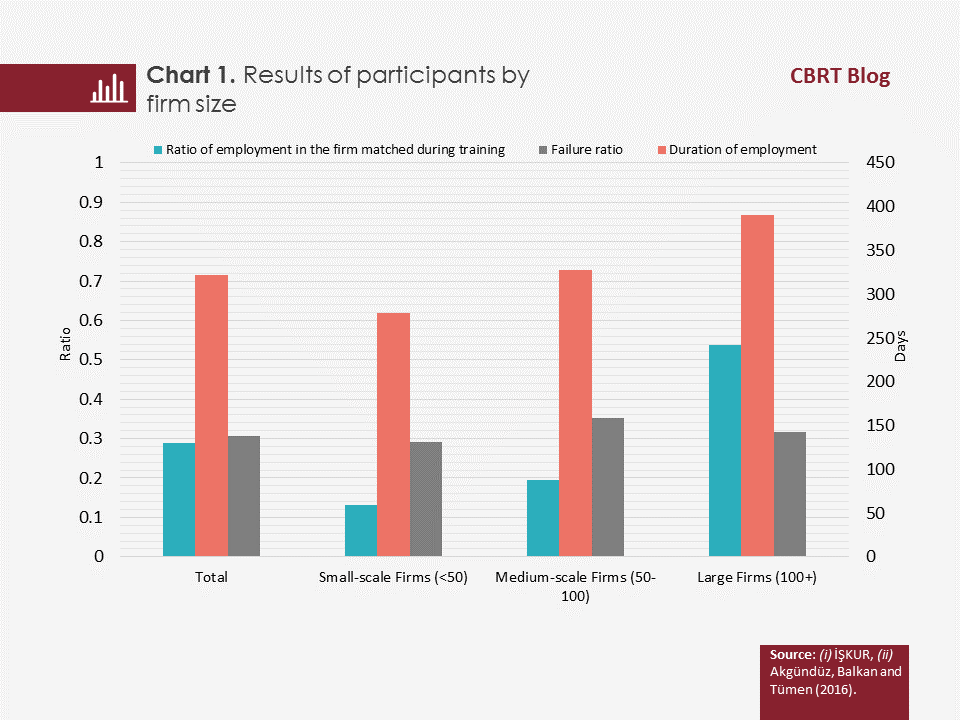 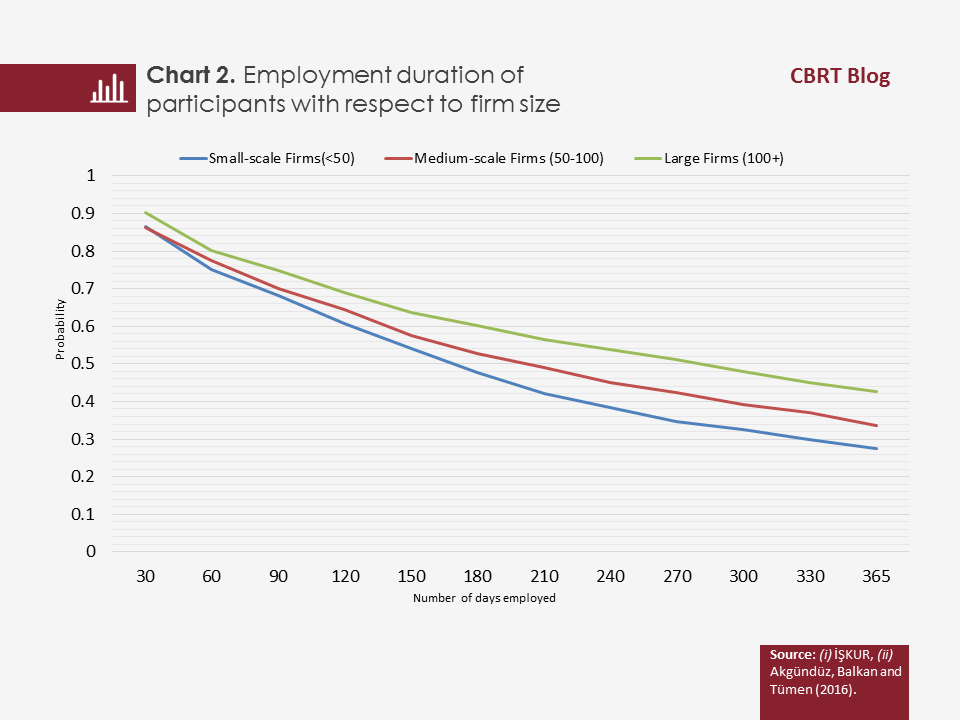 Different reasons can be put forward to explain the positive impact of being matched to big firms. In big firms, the diversity of positions mechanically increases the chances of finding a suitable position for participants. Another explanation is the positive correlation between labor productivity and firm size (Idson and Oi, 1999). Chances of post-course employment is expected to be higher in firms with higher value added. In the long run, big firms are more likely to invest in their employees’ education and availability of in-firm labor markets are the factors that would help participants to increase their human capital and to get promoted  (Black, Noel and Wang, 1999).

Even if the underlying reasons are disputable, empirically, there is a positive relation between firm size and the results of VTC. To conclude, taking into account the firm size, which is an observable property, while selecting the firms to be matched with VTC participants, is a factor that would contribute to the success of the VTC programs. As a policy recommendation, some additional incentives can be offered to big firms to participate in such programs.

Note: This study is being carried out within the framework of the “Impact Assessment of Active Labor Programs” project implemented in line with the official protocol signed by and between the CBRT and İŞKUR. We would like to extend our sincere thanks to İŞKUR management and staff for their invaluable contributions.

Akgündüz, Y. E., B. Balkan and S. Tümen (2016). “Employment Effects of Government-Sponsored Training Programs in Large vs Small Firms: Evidence from Random Assignment of Workers to Firms.” Central Bank of the Republic of Turkey, unpublished manuscript.