A Note on the Enhancement of the Customs Union

Due to Turkey’s prolonged EU membership process, which has lasted for over twenty years, and also due to a series of conjunctural and technical reasons, a need for an enhancement of the Customs Union has emerged in recent years.

Emre Kaya is a Director at the CBRT.

Merve Mavuş Kütük is a Central Bank Assistant Specialist at the CBRT.

The European Union (EU), the foremost trading partner of Turkey, has a significant share in our exports. As of end-2016, 48 percent of Turkey’s exports and 39 percent of its imports belonged to EU countries (Chart 1). The Customs Union, which was put into effect in 1995, has played a key role in our trade relations with the EU. However, due to Turkey’s prolonged EU membership process, which has lasted for over twenty years, and also due to a series of conjunctural and technical reasons, a need for an enhancement of the Customs Union has emerged in recent years. This note primarily presents the reasons why this enhancement is needed and the details on the related process. Next, we summarize the results of the studies on the possible consequences of a likely enhancement.

Why is an Enhancement of the Customs Union Needed?

The Association Council Decision No. 1/95 dated 31 December 1995 established the Customs Union, through which the trade rules between Turkey and EU countries were re-defined. Consequently, customs duties on industrial products and processed agricultural products[1] were abolished in the scope of free movement of goods, whereas services and unprocessed agricultural products were exempted from the Customs Union. While the Customs Union was originally introduced assuming that Turkey would become an EU member in the near future, the full membership process could not be finalized for various reasons. Meanwhile, the world economy has increasingly globalized and trade ties between countries have strengthened, and the EU, which has gone through a significant enlargement process, has taken steps to make deep and comprehensive free trade agreements with major economies such as the USA and Canada.

Over time, some issues and necessities have emerged in Turkey-EU trade relations. The most important issue is that Turkey cannot participate in the EU’s decision-making processes regarding its foreign trade policy and is obliged to accept the related rules and regulations that are introduced. As a matter of course, in custom unions in general, member countries have to apply the same tariff rates and the same trade policies to products imported from third countries to avoid trade diversion. In this respect, Turkey is obliged to adopt a common foreign trade policy with the EU, although it does not have a say in the EU’s policy setting and decision-making processes regarding foreign trade. The “Transatlantic Trade and Investment Partnership”, which is currently negotiated between the EU and the USA, is a good example in this regard. This partnership is planned to be a comprehensive free trade agreement covering issues such as agriculture, industrial products, services, investment and public procurement. However, Turkey can neither defend its national interests nor benefit from this partnership as it does not take part in the negotiations with the US. In addition to that, many efforts of Turkey to complete the free trade agreements signed by the EU with the third countries, which is a liability to implement the Common Foreign Trade Policy of the EU, have turned fruitless as the third countries seem reluctant to get into a partnership with Turkey on the ground of their own interests. This situation causes a divergence between the trade policies of Turkey and the EU, and deprives Turkey of the benefits of comprehensive free trade agreements as a member of the Customs Union.

Furthermore, the fact that it has become clear that the free trade of services, public procurement and agricultural products will have benefits for both parties, the imposition of highway quotas to Turkish commercial vehicles and visas to Turkish businessmen and drivers, and the lack of conflict resolution mechanisms for possible conflicts constitute other reasons for the need for an enhancement of the Customs Union.

The Process of Enhancing the Customs Union and Its Likely Effects

For all the reasons discussed above, it was decided on 28 February 2014 that Turkey and the European Commission establish a working group[2]. On 27 April 2015, the working group finalized its assessments, after which a detailed assessment report was presented to the European Council[3] by the European Commission. During this period, led by the Ministry of Economy of the Republic of Turkey, more than 30 informative cooperation and consultation meetings were organized in Turkey to facilitate the exchange of information with the public and relevant stakeholders. The official negotiations on the enhancement of the Customs Union are expected to begin following the approval of the European Council. Yet, it should be noted that there is a possibility that this process may be interrupted or delayed due to various unforeseen political reasons.

The EU and Turkey share the common view that such an enhancement will provide economic gains to both parties. The scenario analyses conducted so far on this subject reveal that the resolution of existing problems and an update of the agreement to include services, unprocessed food products and public procurement will positively contribute to the economies of Turkey and the EU. An impact assessment study commissioned from an independent research institution[4] by the Ministry of Economy of the Republic of Turkey projects that Turkey’s GDP, exports to the EU and total exports will increase by 1.9 percent, 24 percent and 15 percent, respectively, whereas consumer prices will decline by 1.5 percent, under the preferential scenario of both parties in which the structural problems in the existing agreement are eliminated, services and public procurements are opened reciprocally, full liberalization of agricultural products is ensured and consequently a higher number of free trade agreements are made with third countries including the US and Canada in the first place. The European Commission’s report includes similar results as well. In addition, the enhanced Customs Union will probably lead to an increase in wages, employment and living standards as well as social benefits such as the right to work and social security, and tangible welfare gains in areas such as health and education. 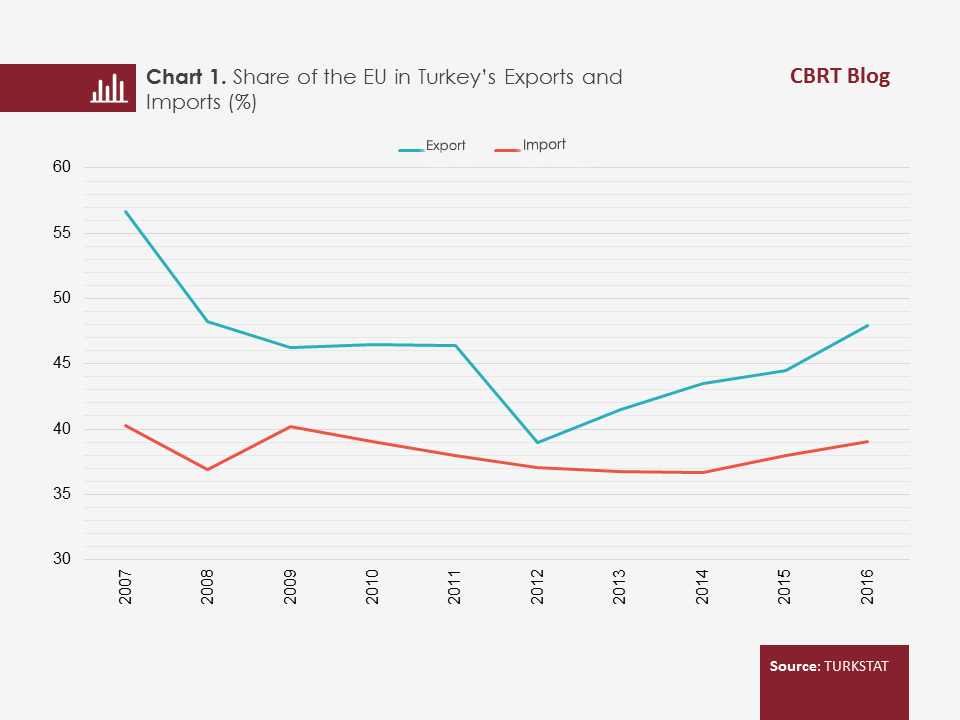 [1] In processed agricultural products, customs duties on only the industrial portion were abolished; those on unprocessed products were retained.

[3] Study of the EU-Turkey Bilateral Preferential Trade Framework, Including the Customs Union, and an Assessment of its Possible Enhancement, European Commission, 26 October 2016, http://ec.europa.eu/smart-regulation/impact/ia_carried_out/docs/ia_2016/turkey_anx6_en.pdf.

European Commission, “Study of the EU-Turkey Bilateral Preferential Trade Framework, Including the Customs Union, and an Assessment of its Possible Enhancement” (2016).

Republic of Turkey Ministry of Economy

Merve Mavuş Kütük is a Central Bank Assistant Specialist at the CBRT.

Emre Kaya is a Director at the CBRT.