An Assessment of the Use of Imported Inputs and Different Perspectives

Elif Özcan Tok is an Assistant Specialist at the CBRT.

Globalization and the rapid advancement in communication technologies are leading to prominent changes in the resource allocation among countries and the production structures of emerging economies in particular. The invisibility of borders is facilitating access to imported inputs and also increasing the competition between input exporters. Consequently, countries that want to have quick and continuous access to higher-quality and inexpensive inputs are opting for external resources. When we look at the big picture, we see that international production processes are intertwined and product-based value chains have become multinational. There is also a similar trend in Turkey. However, since this trend, interacting with exchange rate fluctuations and dollarization, affects main macroeconomic indicators such as inflation and the current account balance, it has turned into a situation of “dependence on imported inputs” in Turkey’s case.

The elevated use of imported inputs is not a completely unfavorable thing. In fact, academic studies on this subject report that access to imported inputs may boost total productivity.[1] Imported intermediate inputs in particular can be obtained at a lower cost and higher quality, and they cannot be consistently substituted with alternative products in the domestic market in the short term. These two facts stand as the fundamental economic mechanisms underlying the increases in productivity [Halpern, Koren and Szeidl, 2015]. Moreover, the availability of some inexpensive and high-quality inputs of critical importance from abroad paves the way for the domestic economy to specialize in the production processes where it has a comparative advantage. In other words, the use of imported inputs may be a strategic choice rather than a necessity.

Accordingly, like other emerging countries relying on the exports to increase their shares in the international trade market, Turkey also gives weight to manufacturing industry sectors whose value added in production is relatively higher than other sectors. Having sustainable access to inexpensive and high-quality imported inputs in these sectors enhances the production and export capacity.

However, this choice may bring certain costs in an economy with high frequency of price changes.[2] Developments in imported capital and intermediate goods markets, coupled with exchange rate developments, may significantly affect the export performance, the course of economic activity, and inflation. The intensity of imported inputs in the production activity and their sectoral distribution determine the characteristics of these effects. On the other hand, a high use of imported inputs reduces the susceptibility of exports to exchange rate developments. The cost of imported inputs increases when the domestic currency depreciates, limiting the impact of exchange rate advantage on exports whereas it drops when the domestic currency appreciates, thus preventing export losses resulting from exchange rates. In other words, all other things being equal, the severity of fluctuations that the exchange rate shocks create in exporter sectors decreases as the share of imported inputs increases. This mechanism works in almost all small open economies.

This blog post analyzes the costs and benefits of the use of imported inputs in light of observations on the general trends in Turkey. It also includes the changes in these trends by sectors and years as well as cross-country comparisons. The most critical point is to define the concept “dependence on imported inputs” and devise policies that will reduce the costs resulting from this dependence. Focusing on this point as well, we draw a general framework to discuss the importance of increasing the share of domestic inputs without compromising the productivity gains from the use of imported inputs. We leave more detailed analyses of specific policy recommendations to future studies.

General Trends in Imports of Inputs

The Turkish economy has shifted to an import-intensive production and export structure in its use of investment/capital goods, intermediates and raw materials over the course of time. As of July 2017, the share of intermediate goods imports in total imports was around 74 percent whereas that of investment goods imports was 14 percent.[3] In imports of inputs, chemicals and chemical products have the highest share in total imports with 15 percent, followed by imports of energy with 14 percent and imports of machinery-equipment and basic metals with 11 percent. The intermediate goods import volume index is on a historically significant uptrend (Chart 1.a). On the other hand, we can say that compared to the general trend in production, the trend in imports of inputs is mostly below the exports and slightly above the industrial production (Chart 1.b). An analysis of the course in the intermediate goods import volume index relative to the industrial production index reveals that it fluctuates and declines in periods of economic stagnation [Saygılı et al. (2010)]. 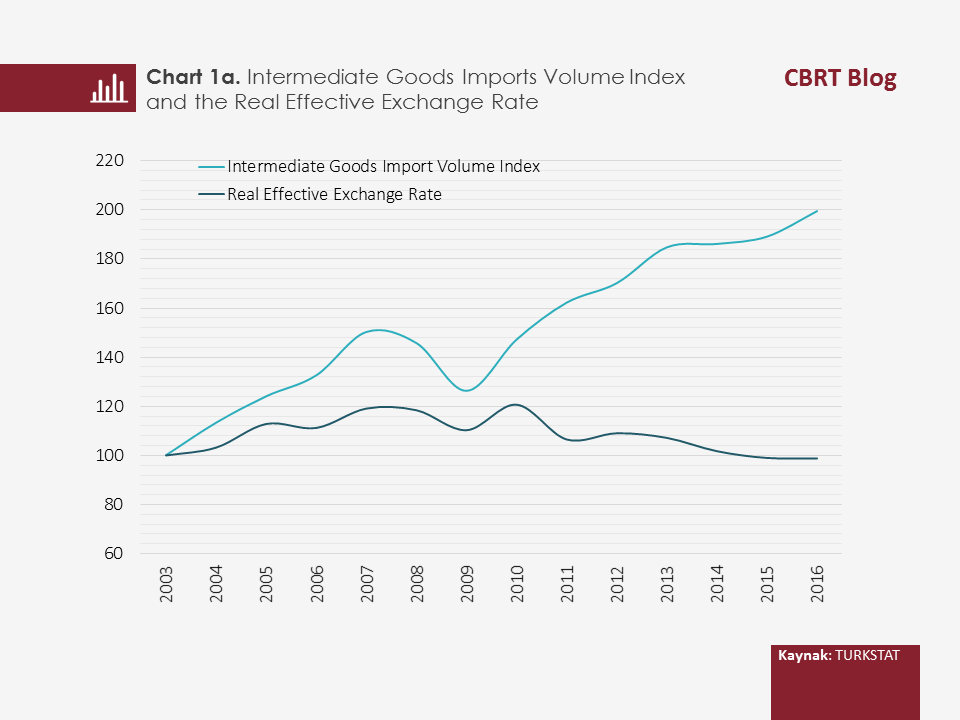 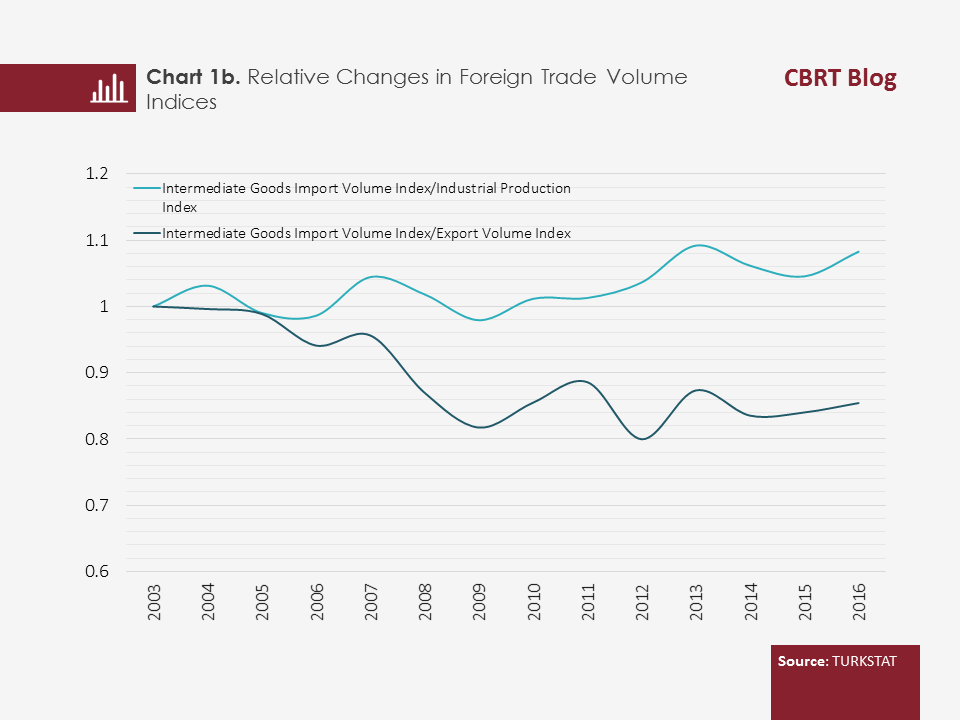 Using input-output tables that allow for analyses of cross-sector interactions is very helpful for a more comprehensive examination of the imported inputs intensity by sectors. Import requirement coefficients computed using input-output tables show the contribution of imported inputs to sectoral production. The two most up-to-date tables prepared by TURKSTAT belong to the years 2002 and 2012. The computations reveal that the import requirements in the manufacturing industry increased over time to reach 31 percent by 2012. A comparison of these two tables in a breakdown by sectors demonstrates that the highest increases were recorded in food, beverages and tobacco products, agriculture and hunting, and chemicals and chemical products sectors. According to the input-output tables for 2012, sectors with the highest import requirement coefficients are the coke and refined petroleum products, electricity, gas, steam and air conditioning supply, basic metals, motor vehicles, trailers and semitrailers, chemicals and chemical products sectors. The average weight of imported inputs in raw material- and capital-intensive sectors are as large as the total of domestic inputs and value added. On the other hand, the five sectors using imported inputs at the lowest rate are composed of labor-intensive sectors. The import requirement coefficients tend to increase in sectors with a high intensity of imported inputs whereas they display a downtrend in sectors with a low intensity of imported inputs (Table 1). 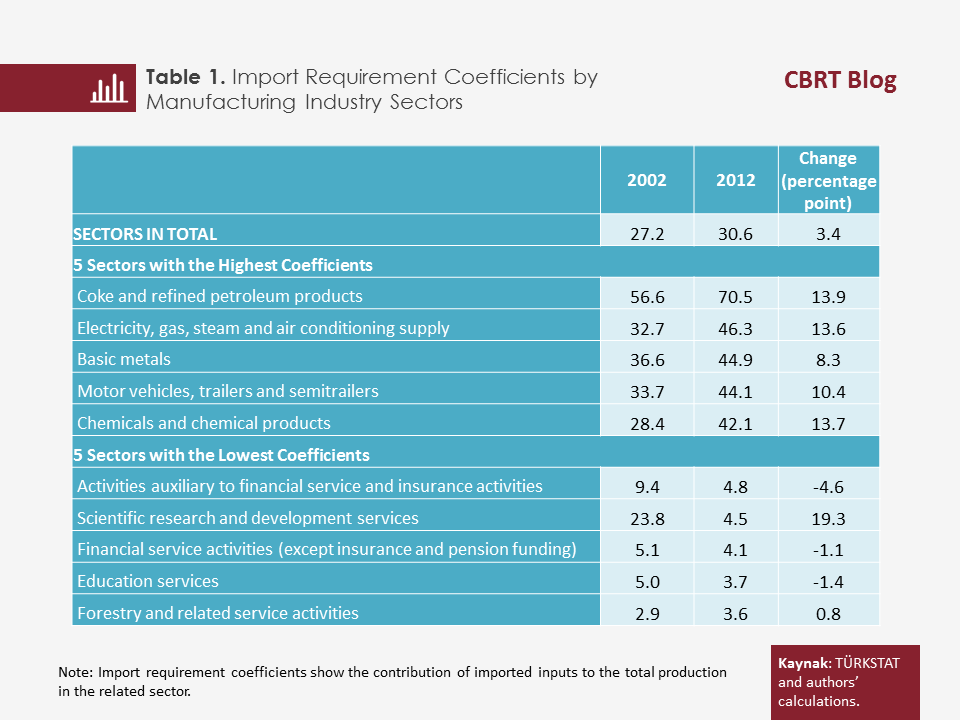 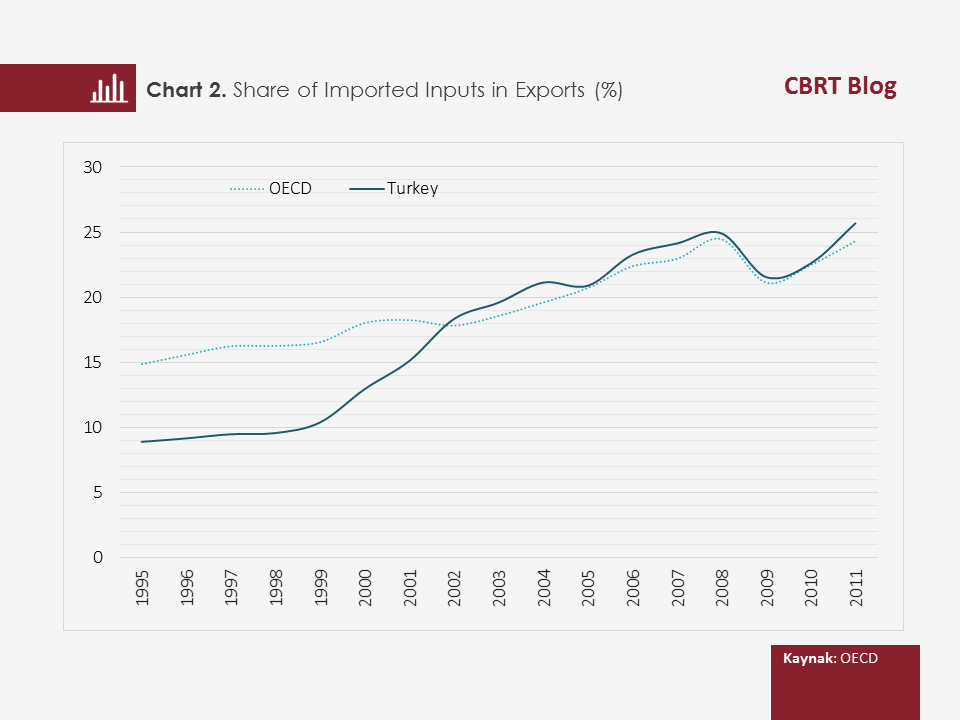 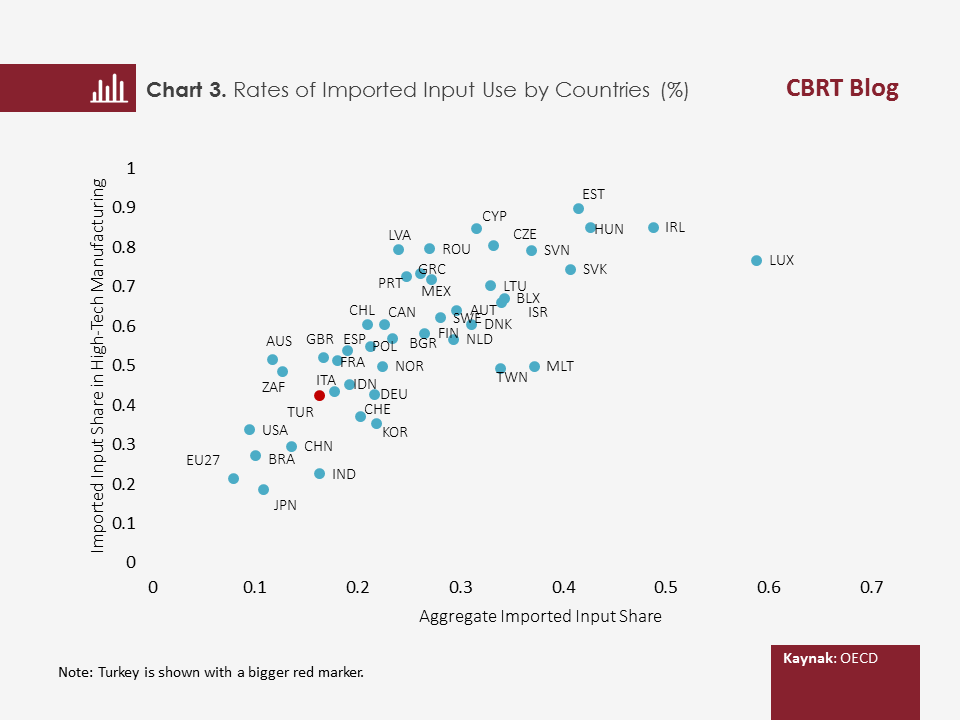 There are two main perspectives on the use of imported inputs. The first one has emerged as a reflection of the need for import-substitution growth in closed economies. This perspective advocates that the use of imported intermediates will expose production to external shocks, thus destabilizing it and hindering development. Accordingly, the background for production should be provided internally through foreign trade measures and various incentives (sometimes by the state itself). The second perspective suggests that conducting trade with the country that produces the relevant goods in the most efficient way under prevailing conditions will lead to a direct productivity gain. Modern foreign trade theories also support this view. Thus, while importer companies will boost their productivity by supplying a cheaper and more effective input from abroad, the total resource allocation in the economy will also improve as companies that produce the same input in an inefficient way will be removed from the economy. Recent studies on this subject indicate an improvement in the performance of companies and economies that predominantly opt for external inputs in their resource utilization. Yet, the total effect of the free use of inputs on the economy is still uncertain.

The first perspective seems like a more reasonable alternative for closed economies but in today’s world where the opening up of economies is inevitable, the second perspective is more prevalent in practice. Nevertheless, it is obvious that the optimal solution lies somewhere in between these two perspectives. The use of imported inputs brings about some productivity gains offered by an open economy but it would be wise to keep the imported input rate under control to reduce the susceptibility of economies to external shocks.

Rates of imported input use in Turkey do not differ much from the world averages. However, there are certain sectors where imported inputs are used more intensively. Moreover, the rates of imported input use in these sectors have picked up in time. We can categorize inputs imported by these sectors in two groups. The first group includes petroleum and other raw materials. These are inputs obtained from natural resources and have no alternatives in the short run. Steps taken in the present and the future – particularly in the energy sector - may lead to significant gains in this area in the medium term. However, there is no straightforward policy alternative for the substitution of these inputs in the short term. The second group consists of petroleum products, and processed or semi-processed imported products used in basic metal and other manufacturing industry sectors. Although it is appealing to import these inputs in the short term, it is also possible to shift to domestic production by accordingly directing the existing technology and resources of our country within a certain investment plan. Investment plans for the domestic production of processed petrochemical products can be deemed an example in this regard. Similarly, it is possible to take up domestic production for some inputs particularly in automotive and related sectors as well as in machinery and equipment. The most critical issue in this shift is the production costs. If the domestic production of an input costs more than getting a corresponding imported input, this additional cost may need to be borne either by public funding or directly by consumers via the inflation channel. In either case, this may raise concerns about sustainability. Ideally, in its initial phases, the shift to domestic production should be encouraged by the state through appropriate instruments, and the incentives should aim to create medium- and long-term cost advantages. Ensuring that the quality of a domestic product keeps up with the quality of the imported input that it will substitute should also be among the main policy objectives.

[2] A high frequency of price changes by firms increases the impact of production shocks on nominal volatility. The average price spell duration is approximately 2.5 – 3 months for products other than food and energy in Turkey whereas this duration varies between six months and a year in economies with low macroeconomic volatility  (Şahinöz and Saraçoğlu, 2008; Özmen and Sevinç, 2016).

[3] It should also be noted that imports of investment goods may involve high seasonality as well as dependence on economic activity and the exchange rate.

[4] Policies regarding the use of imported inputs have been on the agenda of policymakers for a while now. Under the presidency of the Ministry of Economy, an Input Supply Strategy (GITES) and Action Plan was prepared for the 2013-2015 period to reduce import dependence and ensure effective supply of inputs. In addition, horizontal action plans were drawn up concerning a number of sectors excluding the energy sector that has its own unique regulations and legislation.

Kasahara, H. and J. Rodrigue (2008). “Does the Use of Imported Intermediates Increase Productivity? Plant-level Evidence,” Journal of Development Economics, 87, 106-118.

Elif Özcan Tok is an Assistant Specialist at the CBRT.