An Overview of the Basel Banking Regulations

Mehmet Büyükkara is a Central Bank Assistant Specialist at the CBRT.

Globalization has increased the diversity of financial products and services but it has at the same time diversified the risks to which the banking sector is exposed. The Basel banking regulations have been drawn up to manage the current and impending risks and to set international banking standards, including a stronger capital structure. On the other hand, the Turkish banking sector has been minimally affected by the global financial crisis, thanks to its strong and robust structure supported by the reforms introduced after the crisis in 2001. It does not face any problems in implementing the current Basel III regulations.

The rapid advancement in the financial sector fueled by accelerated globalization and technological progress has brought about the necessity to monitor international financial movements in particular, introduce stricter regulations for countries’ banking systems, and reduce the divergence in global regulations. In this framework, founded in 1974, the Basel Committee on Banking Supervision (the Basel Committee) issued the “Capital Adequacy Accord” called “Basel I” in 1988. Basel I set out a capital adequacy ratio which stipulates that the ratio of a bank’s capital to risk weighted assets (RWA), calculated by multiplying asset and off-balance sheet items by certain risk weights, should be no less than 8 percent. Basel I was revised in line with new developments and was finally replaced by Basel II standards in 2004. A comprehensive version of Basel II standards was released in 2006, aiming to achieve an effective risk management and supervision at banks and market discipline as well as to contribute to financial stability. After the global financial crisis, studies were initiated under the lead of the G20 to eliminate the fragilities in the banking and finance sectors, and to increase the resilience of banks to shocks. In this period, the Basel Committee prepared a transitional process calendar for Basel III standards (Table 1). The Basel III regulation consists of three simple, comparable and risk-sensitive structural pillars of minimum capital requirements, effective supervision and market discipline. The Committee aims to complete the reform process after a consensus is reached on the remaining regulations, particularly the one related to output floor[1]. 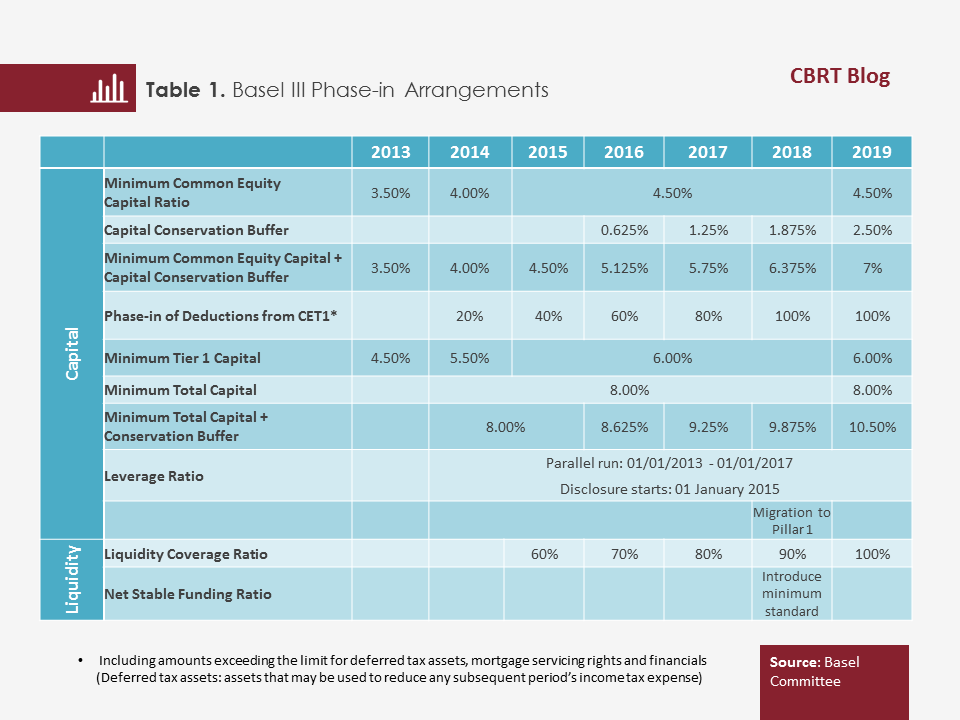 The Basel Committee has been issuing progress reports on the adoption of Basel III by member countries every six months since October 2011. According to the twelfth progress report released on 25 April 2017[2], all 27 member countries have risk-based capital rules, liquidity coverage ratio (LCR) and capital conservation buffer regulations in force as of March 2017. Of the member countries, 26 have issued countercyclical capital buffers. While 25 countries have issued final or draft rules for domestic systemically important banks (D-SIBs) frameworks, members that are home jurisdictions to global systemically important banks have final rules in force. Twenty member countries have issued final or draft rules for margin requirements for non-centrally cleared derivatives. According to the survey conducted by the Financial Stability Institute (FSI) and published in July 2015[3], the majority of non-Basel Committee members implement the Basel II regulations whereas country implementations of Basel III diverge.

The Basel III capital regulation is intended for a higher-quality capital structure. Accordingly, capital is classified based on the capacity to absorb losses. Moreover, banks have to meet the minimum capital requirement in relation to RWAs. The regulatory framework also introduces additional capital buffers. These buffers are set to be built up of common equity capital including high-quality capital. It is planned that the capital conservation buffer[5] ratio is gradually raised from 2016 through 2019 so that it will ultimately be 2.5% of RWAs. If the capital conservation buffer requirement is not met, banks will still be able to conduct business as normal but profit distribution constraints will be imposed on banks at different rates. To factor in procyclicality, Basel standards have also introduced a countercyclical capital buffer requirement that will vary between 0% and 2.5% depending on the conditions and preferences of member countries. This countercyclical capital buffer, which will be increased or reduced according to an economy’s growth rate, is anticipated to avert rapid credit growth. Basel III capital requirements for 2017 are shown in Chart 1. 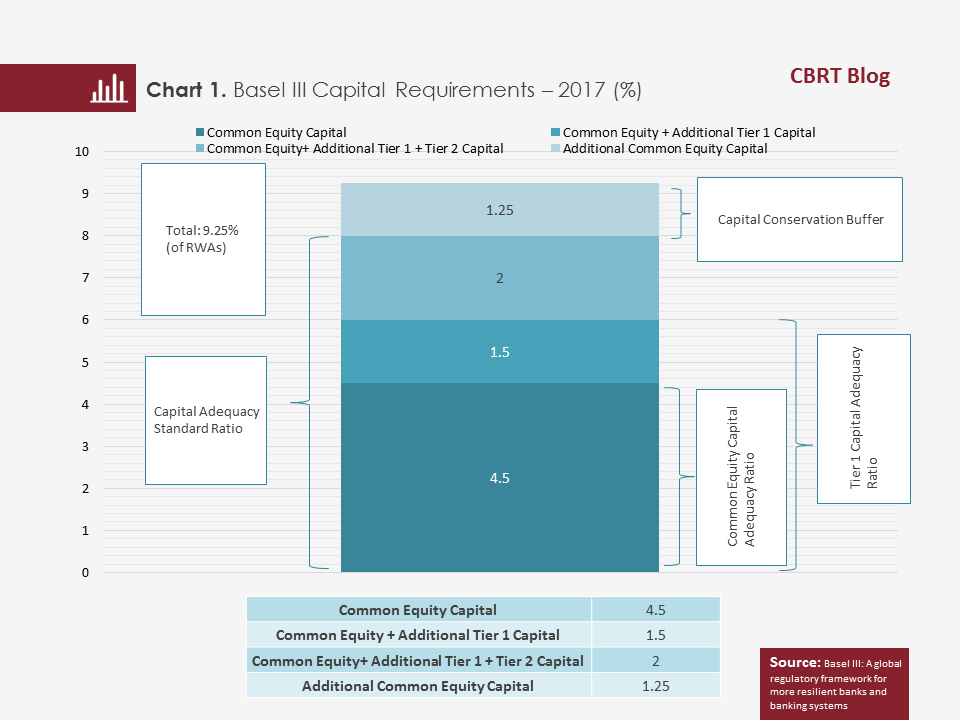 The Basel Committee established the Regulatory Consistency Assessment Program (RCAP), which aims to ensure timely adoption of Basel standards by member countries and consistency and integrity of the standards, evaluates each country individually, and is intended to contribute to achieving global financial stability by bringing international uniformity in the implementation of standards. The Committee completed the RCAP process for Turkey on 15 March 2016 and concluded that the relevant legislation of Turkey is fully compliant with Basel capital regulations. Currently, the Banking Regulation and Supervision Agency of Turkey (BRSA) stipulates a minimum capital adequacy ratio (CAR) of 8% that is consistent with Basel III. In addition to this minimum ratio, Turkey has also a target CAR ratio of 12%. In Turkey, the capital conservation buffer ratio is 1.25% and the countercyclical capital buffer ratio is 0%.

The Basel III Liquidity Coverage Ratio (LCR) regulation is intended to ensure that banks have a high-quality liquid asset stock sufficient to cover net cash outflows in the next 30 days. The LCR should be minimum 100% by 2019. On the other hand, the net stable funding ratio (NSFR) was devised against the long-term liquidity risk. Banks are obliged to meet the minimum NSFR requirement of 100% by 2018.

In Turkey, the total and foreign-currency LCRs will be applied as 100% and 80%, respectively, by 2019. The RCAP assessment states that Turkey also fully conforms to Basel LCR regulations.

The leverage ratio[6] developed by the Basel Committee to supplement the risk-based capital ratios has been proposed to be minimum 3% and the work for the calibration of this ratio is underway. The BRSA stipulates in its “Regulation on Measurement and Evaluation of Leverage Level of Banks” effective as of 1 January 2015 that banks should achieve and maintain a minimum quarterly (March, June, September, December) simple arithmetic mean of 3% for the monthly consolidated leverage ratio.

The Basel Committee has introduced a more prudential regulatory framework for systemically important banks that constitute a large and complicated structure. In this way, it is intended to ensure that banks have higher loss absorbing capacities (additional capital requirement), are subjected to stricter supervision, and are resolved without resorting to public funds.

The BRSA published the “Regulation on Systemically Important Banks” on 23 February 2016. The Regulation includes an indicator-based approach for the specification of a bank’s systemic importance. This approach takes into account criteria such as size, interconnectedness, complexity and substitutability as well as the indicators and sub-indicators related to these criteria. Also, an additional common equity capital requirement is calculated for D-SIBs[7]. The transitional process for the D-SIBs regulation in Turkey is shown in Table 2. 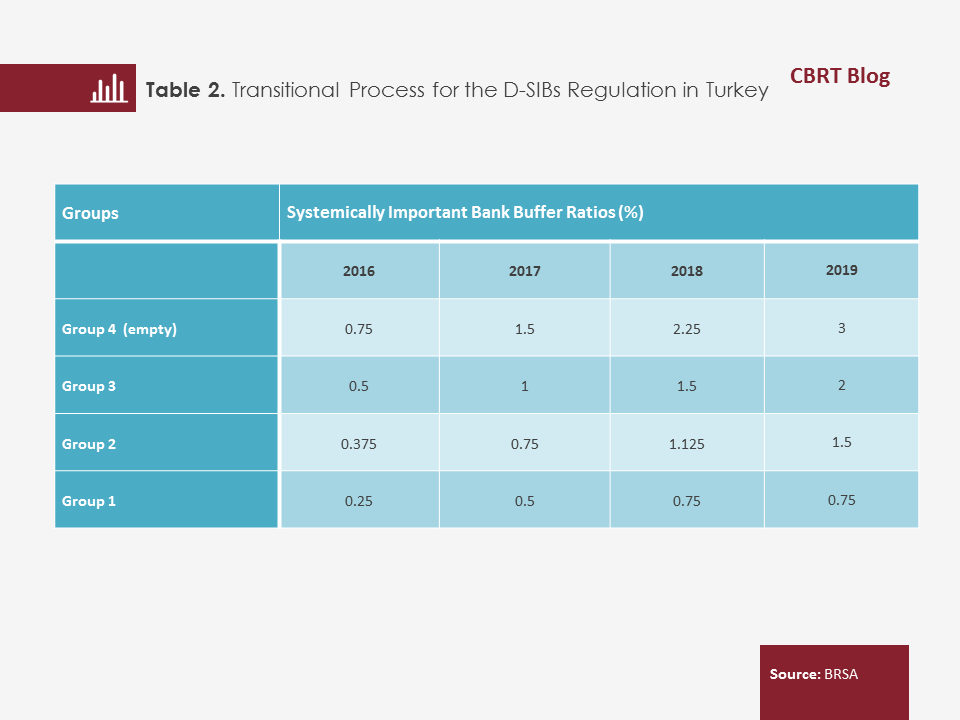 The Turkish banking sector does not experience any problems in implementing Basel III regulations thanks to its high capital adequacy level, strong risk management, effective supervisory and internal control systems, robust equity structure, high level of liquidity, low leverage level and deposit-based funding structure. A banking system that is ready for and compatible with Basel III standards is one of the basic factors of sound and sustainable development of Turkey, through the support it will provide to the corporate sector in the medium and long term.

[1] Output floor can be defined as a measure serving to prevent a marked divergence between capital requirements due to alternative approaches employed by banks in their capital adequacy calculations.

[5] The capital conservation buffer refers to additional amount of Common Equity Tier 1 capital expected to be held by banks to avoid a situation where equities prove insufficient according to capital adequacy regulations due to losses that may be incurred when economic and financial indicators deteriorate.

Mehmet Büyükkara is a Central Bank Assistant Specialist at the CBRT.