Can the Zero Lower Bound Problem Be Overcome by Raising the Inflation Target in Advanced Countries?

The cost of raising the inflation target would most probably override its benefits. Moreover, although the likelihood of advanced country central banks hitting the zero lower bound problem is high, it will not be easy for them to abandon this policy that they have built up over a long time.

It has been a decade since we left behind the global financial crisis. Yes, we have left it behind but even after all this time, things in the global economy have not fallen into place yet. Although advanced economies in particular show signs of recovery, their inflation rates are very low.

In fact, the common view in the economic literature is that prices rise as the economies grow since wages increase as unemployment decreases. Today, this view is under discussion. Some suggest that this relationship, named the Phillips curve, is now more horizontal while others argue that it is not linear and still others say that it is not symmetric. This is because the unemployment rate is at historically low levels in many advanced countries but neither wages nor inflation are increasing at the desired pace.

Furthermore, short-term nominal interest rates have been close to zero for a very long time now. However, this zero lower bound problem was deemed an exceptional case in the pre-crisis period to such an extent that it was even excluded from the textbooks and the economics curriculum. As a matter of fact, studies employing US data or Euro area data were suggesting a low probability of encountering this problem or a very short lifetime for such an encounter, if any. Indeed, it was really an almost forgotten problem that advanced countries, except Japan, had not experienced for at least the last sixty years. However, this problem is now facing us directly.

From high inflation to low inflation…

Well, how did we end up here? We have to go back forty or fifty years to answer this question. It may have been erased from memories but from the early 1970s through the mid-1980s, advanced countries were struggling with two-digit, high inflation unlike today. Price stability was only achieved as of the second half of the 1990s after long efforts. 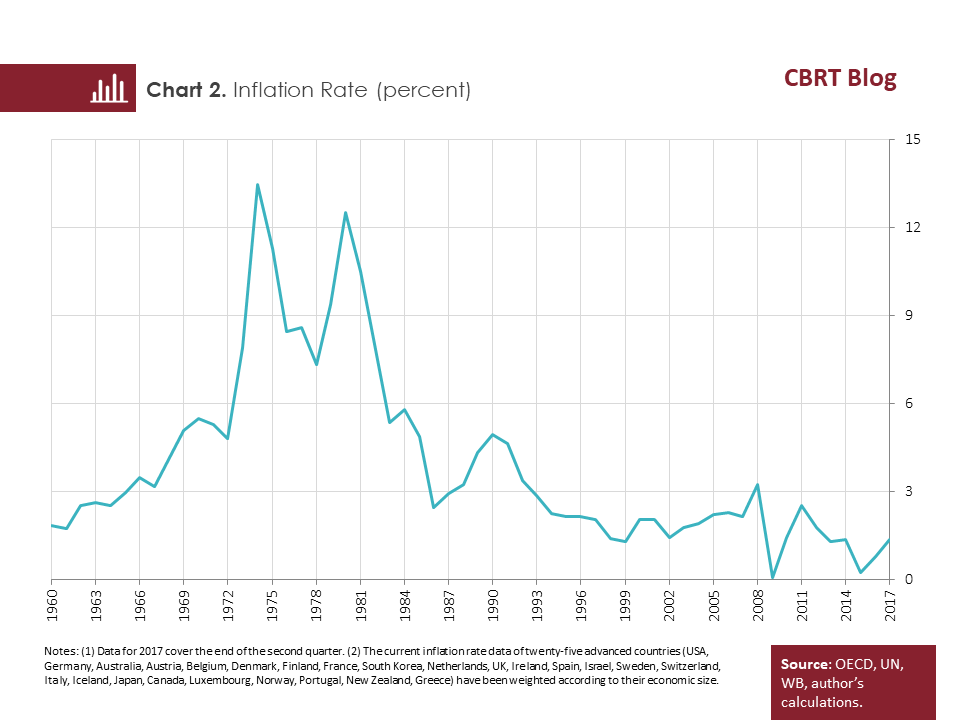 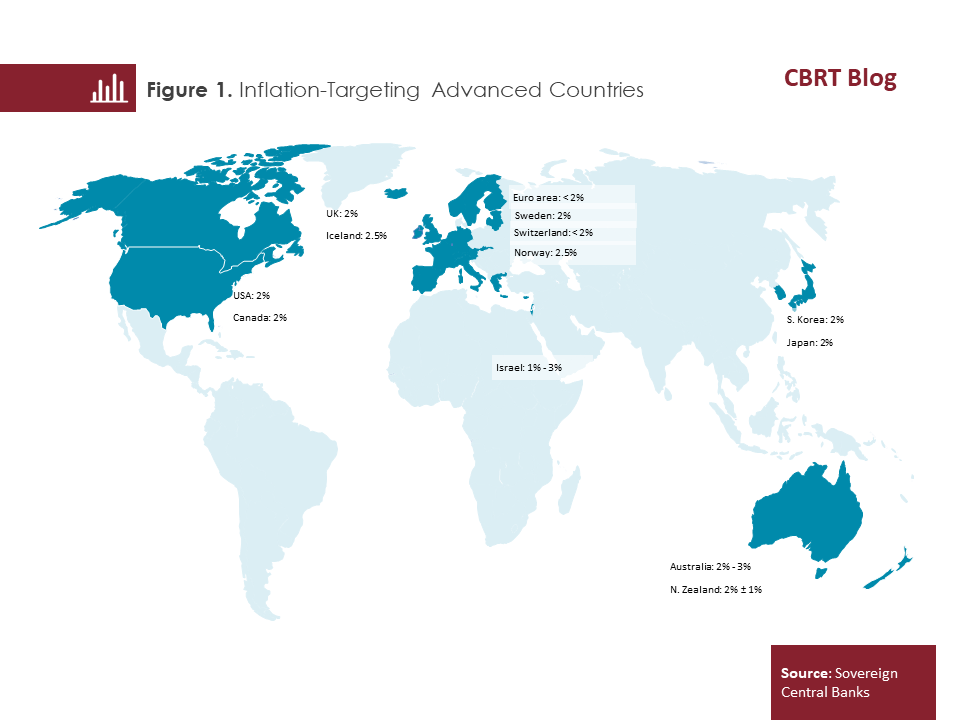 Inflation target is now believed to be low…

And now, the 2-percent inflation target is believed to be the reason for the zero lower bound problem, accused of not providing central banks with sufficient room for maneuver during periods of stagnation. Central banks lower their policy interest rates during periods of stagnation so that their economies are revived via low or even negative real interest rates. At this point, this 2-percent inflation target is thought to prevent a fall in the real interest rate that would be sufficient to get the economy out of stagnation in the short term.

So, if there was such a problem, why has it never been discussed so far? Or was there no such problem in the past?

We can answer this question via the “Taylor Rule” that forms the basis of contemporary monetary policies. In the simplest terms, this rule suggests that the nominal interest rate is composed of the “neutral real rate of interest”, the “inflation rate”, the “difference between the actual inflation rate and the inflation target”, and the “difference between actual output and potential output” variables. 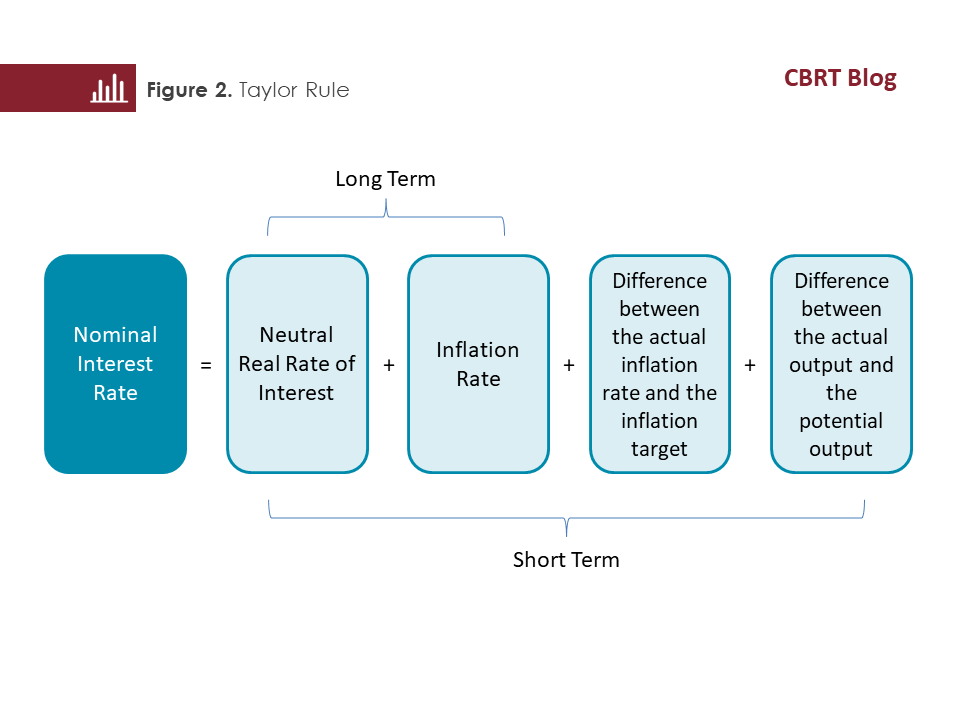 The neutral real rate of interest is defined as the real interest rate carrying the potential for economic growth. When the real interest rate is at a neutral level in a period when the economy is in balance, the output gap is close to zero. It is not that easy to calculate this rate as it cannot be directly observed but can only be gauged via various statistical methods and changes over time. There are many methods but the most popular one is the method developed by Laubach and Williams (2003). According to a recent study employing this method, the neutral real rate of interest has been falling in advanced countries since the early 1960s and is even below 0.5 percent now. 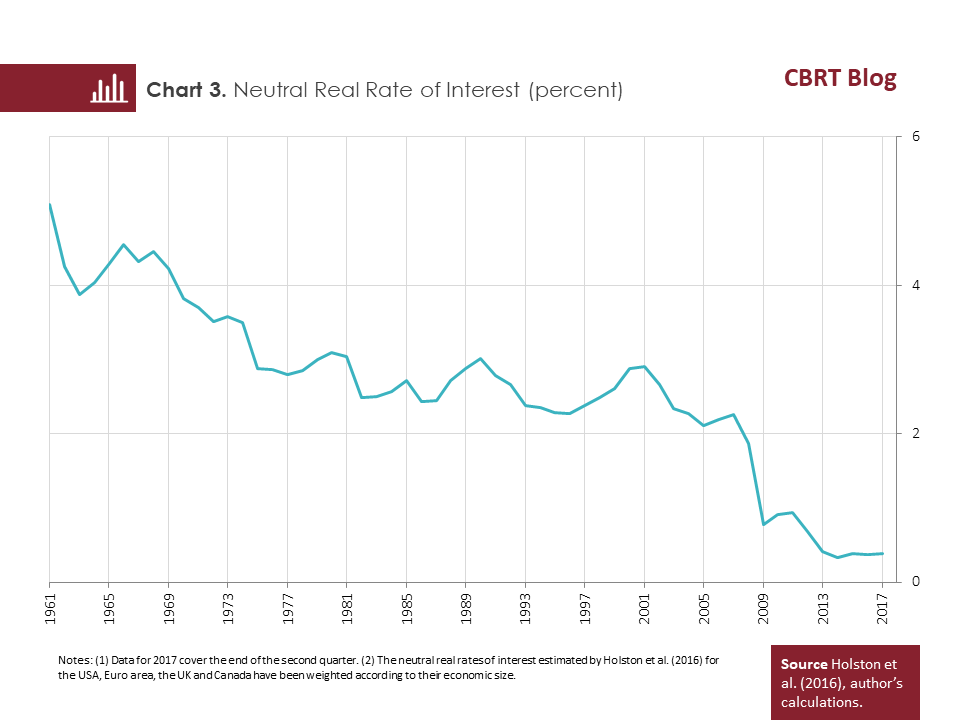 This method has been criticized by some authors but long-term real interest rates calculated by arithmetic methods have also consistently declined for the last 30 years in particular. These rates have fallen to 0 percent today from slightly above 7 percent in the mid-1980s.

It is believed that this fall did not start with the crisis but originated from long-standing structural problems in advanced countries. These problems – listed as the aging of the population, the decelerated productivity increase, and the development process of the global economy – are now thought to be permanent. 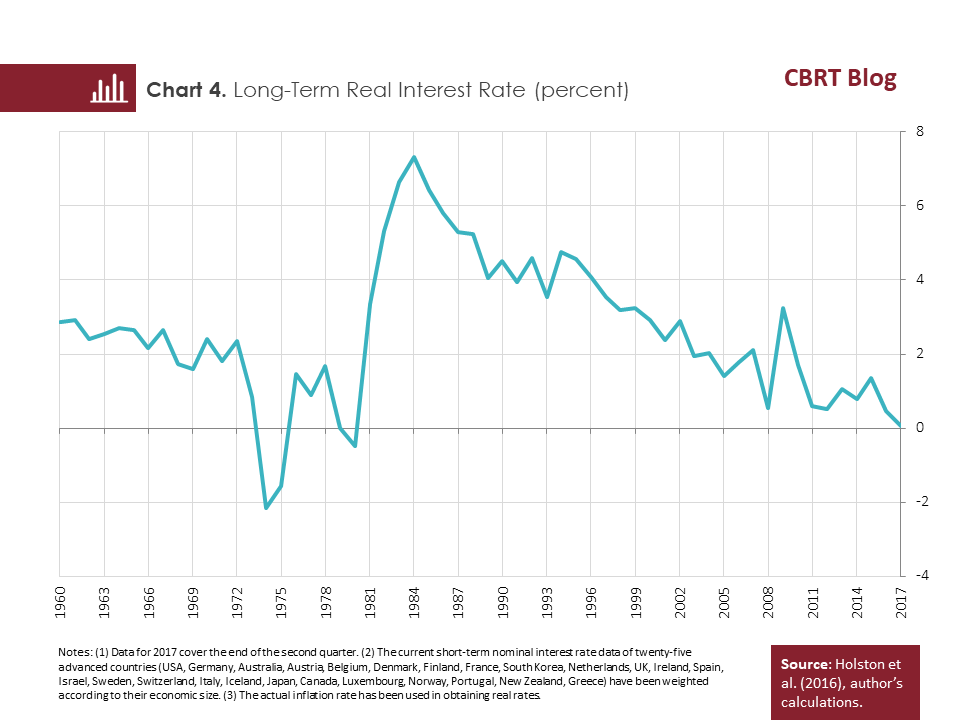 This means that if the neutral real rate of interest remains constant at 0.5 percent and the inflation target is set at 2 percent again in the upcoming period, the nominal interest rates in advanced countries will be around 2.5 percent in the long term. A recent study highlights that such a low interest rate level obviously increases the frequency of an encounter with the zero lower bound problem and significantly lengthens the duration of this problem.

The central banks of advanced countries seem to have two options…

What kind of a policy will the central banks of advanced countries pursue after a negative shock in the upcoming periods? How will they put their economies back on track?

The first thing they will do, as we all know, is to gradually cut the policy interest rate, but this cut will be by only 250 basis points in total. If this amount of cut is not sufficient to bring stability to economies, which will most probably be the case, then the central banks will have two options: They will, as did the Anglo-Saxon world, resort to unconventional policies such as quantitative easing or forward guidance when the rates come close to zero, instead of introducing any further policy rate cuts. In this case, the exit from stagnation will be difficult and take a long time as is the case now. The second option is that they will reduce the policy rates further to even below zero percent, as Continental Europe and Japan have done, and thus step into uncharted territories. Or…

Raising the inflation target as a third option…

…or the central banks will raise the inflation target before the stagnation occurs. This recent argument suggests exactly the following: “If the neutral real rate of interest is even below 0.5 percent with no serious sign of an increase and it is beyond the control of central banks, then let central banks raise the inflation target which is under their control. In this way, the nominal interest rate will also increase in the long term and central banks will have a larger room for maneuver to cut policy interest rates in a likely stagnation”. This is more or less what 22 US economists wrote in a letter to Fed Governor Yellen and other board members at the beginning of this summer.

In fact, the first person to voice this argument in today’s sense was Blanchard. However, it was in 2010 and the economy had not recovered from the shock of the crisis yet. Rather than dealing with inflation, the central banks of advanced countries were in search of practical solutions that would get the economy out of difficulties as soon as possible. This is why Blanchard’s suggestion did not receive sufficient attention, while a few people such as Bernanke who showed some interest were not that positive about it.

The first serious support for Blanchard’s argument came four years later from Krugman and Ball. They both said that there was no scientific ground for choosing 2 percent as the inflation target and it may as well be 3 percent or 4 percent. Current discussions on this subject reveal that proponents of this view have agreed on 4 percent.

In fact, it is obvious that this raise will create room for an additional 200-basis-point cut in policy interest rates before they come close to zero in stagnation periods, significantly relieving the central banks of advanced countries.

Yet, it has also some disadvantages…

What is also obvious is that this policy has also its own disadvantages as is the case in all policy choices. What may these disadvantages be?

First of all, the credibility of central banks may be damaged. People may get a feeling that a central bank that raises the inflation target to 4 percent today for some reason may further increase this target to 5 percent or even 6 percent for another reason in the future.

While the benefit of a high inflation target is observed only when the nominal interest rate is close to zero, its disadvantages will be extended over all times. On the other hand, the adverse effects of unconventional policies such as quantitative easing and negative interest rates implemented only during crisis periods are temporary. As a matter of fact, in one of his articles, Bernanke argues that bringing policy interest rates below zero percent is no worse than raising the inflation target and may be even better in some ways. Quantitative easing can also be approached from this perspective.

It is also known that a rise in the inflation rate will also trigger a rise in inflation volatility.

In addition, past experience has demonstrated that once inflation expectations worsen, slowing the elevated inflation can only be accomplished at a high cost.

Regarding the question in the title, yes, raising the inflation target may be considered as an option to overcome the zero lower bound problem. Theoretically, the higher we raise the inflation target, the farther we steer away from the zero lower bound problem. However, in the current practice, the Phillips curve is not working in the expected direction, which raises concerns about the success of this strategy. Moreover, from an economic perspective, it should also be reckoned that we may face high inflation-driven problems. In the end, the cost of raising the inflation target may most probably override its benefits. Also, although the likelihood of advanced country central banks hitting the zero lower bound problem is high, it will not be easy for them to abandon this policy that they have built up over a long time. Yet, it seems that this subject will continue to concern the academic world for a long time, at least until they find a fourth option as another way out.

Advisory Commission to Study the Consumer Price Index, (1996), “Toward a More Accurate Measure of the Cost of Living”, 4 December.

Gross, M. ve W. Semmler, (2017), “Mind the Output Gap: The Disconnect of Growth and Inflation During Recessions and Convex Phillips Curves in the Euro Area”, ECB, Working Paper No. 2004.

Reifschneider, D. ve J.C. Williams, (1999), “Three Lessons for Monetary Policy in a Low Inflation Era”, Board of Governors of the Federal Reserve System, Discussion Paper No. 1999-44.