Turkey has recently achieved significant progress in the field of credit reporting. However, despite its magnitude, this progress falls short of contributing to financial inclusion.

Ömer Kayhan Seyhun is a Central Bank Specialist at the CBRT.

Establishment of an effective credit mechanism, hence an efficient credit database, has recently come to be considered a prerequisite for enhancing financial inclusion.  Therefore, advanced credit reporting is expected to contribute to financial inclusion and financial stability especially in developed countries by using different methodologies, expanding the database and increasing its quality.

What do we mean by credit reporting? Which institution is in charge of this task in Turkey?  Credit reporting, in general terms, means assessment of information related to identity, debt, credit and derivatives of individuals/companies, institutions and organizations by specialized agencies in a systematic and historical format, and making available such information to decision makers, lenders and borrowers within the framework of certain regulations. In Turkey, the Risk Centralization Division of the Central Bank of the Republic of Turkey performed this task smoothly from 1951 to 2013. In 2013, the duties of this division were transferred to the Banks Association of Turkey Risk Center (BAT-RC) as a part of a reform. The objective of this reform was to allow the Central Bank to focus on its main duties and leave the risk center operations to a specialized institution in this field.

Are there any standards in credit reporting? If so, who determines these standards? The World Bank International Committee on Credit Reporting (ICCR) mentioned standards for the first time in 2011 in its document “General Principles for Credit Reporting”[2] to provide guidance after the latest financial crisis. Setting such standards allows for establishment of a correct, effective, auditable, understandable, far-reaching and historical database thereby underpinning financial inclusion.

The Link between Credit Reporting and Financial Inclusion

The World Bank included the topic of “Credit Reporting and Financial Inclusion” in its 2016 report.[3] According to the report, credit reporting contributes to financial inclusion in many aspects. The most important contribution is the expansion of the database related to individuals and SMEs to cover customers’ own payment histories and other predictable data sets. Therefore, with the establishment of a comprehensive data set by expanding the database, risk premiums will be calculated more accurately, thereby facilitating lenders’ work and leading them to unserved low-income groups. In the meantime, credit reporting will also contribute to consumer rights, responsible borrowing and anti-fraud operations. And once the small credit reporting institutions lending to low-income groups are integrated into the system, it will safeguard them against big ones by way of a fair reporting system.[4]

An Evaluation from the Perspective of Turkey

In Turkey, the main data provider in credit reporting is the BAT-RC that commenced operations in June 2013 and the Credit Bureau (Kredi Kayıt Bürosu-KKB) that runs the relevant services on the behalf of BAT-RC. [7] In 2016, the number of detailed reports that the RC produced for all member institutions, public authorities, individuals and companies reached 307. This figure is well above the number of reports produced by several developed country risk centers and credit bureaus. By the end of 2017, the number of information inquiries made through the RC by members increased above 500 million per year, which placed the RC in the first rank in Europe.

In addition to delivering conventional reporting services for member financial institutions, the RC also helps its members analyze risks regarding their customers by way of its various products such as personal indebtedness index, cheque reports, QR code cheques, complex credit rating and risk reports. The system also provides companies and individuals with electronic access to cheque reports and risk reports, thereby enabling them to predict their risks clearly in a very short time. [8] According to the latest data, the number of cheque and risk reports generated by the system has increased dramatically to reach ultimately above 10 million reports per year from a level of 40 thousand reports per year in 2013, before the transfer of the risk center.

Although the financial reporting systems in Turkey are at the European Union standards and partly at a high level in relation to certain reports, the integration of individuals with the financial system and the use of the system are not on a par. Other measures of an advanced credit reporting system are both its geographical coverage within a specific country, and the extent to which it allows more effective use of financial services by expanding the financial inclusion in a way that reduces the gender gap. According to the Global Findex data in the 2016 FSAP Report, which evaluates financial inclusion in Turkey on the basis of households and SMEs, although the account ownership of individuals in any financial institution in Turkey is higher compared to the Eastern Europe and Central Asian (ECA) [9] countries, it lags behind BRICS[10] countries. The ratio of having a current account among the population above 15 years of age is 57 percent, whereas the same ratio reads as 69 percent for males and 44 percent for females (Chart 1). 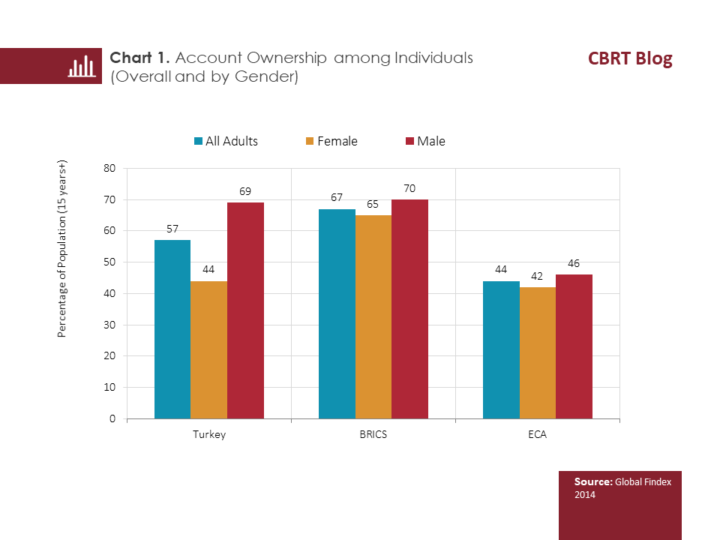 An analysis of account ownership rate by considering other aspects, such as income, age and education, highlights that Turkey ranks above ECA, but lags behind BRICS countries.

The Global Findex survey reveals that credit card and debit card ownership rates in the population above 15 years of age are 33 percent and 43 percent, respectively (Chart 2). Accordingly, the credit card ownership rate in Turkey is well above that of other country groups. Meanwhile, the data on the use of current accounts by adults suggest that the credit card and ATM utilization rates at 29 percent and 67 percent, respectively, rank the top among all other country groups. The same chart also indicates that the rate of payments made through internet at 19 percent is relatively higher compared to other country groups. The rate of payments through mobile phones, though, is relatively low at 8 percent. 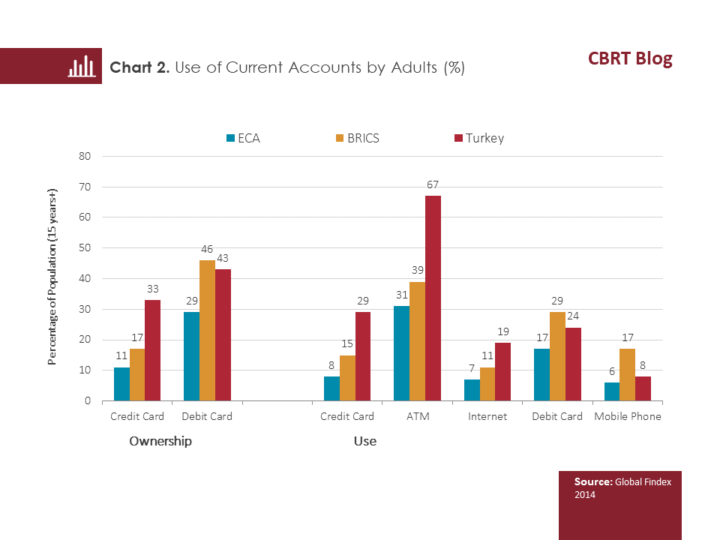 Finally, according to a survey conducted in 2014, approximately 41 percent of adults declared having saved (Chart 3).   Meanwhile, it is noteworthy that only 9 percent of the related population accumulated savings at a legal financial institution. 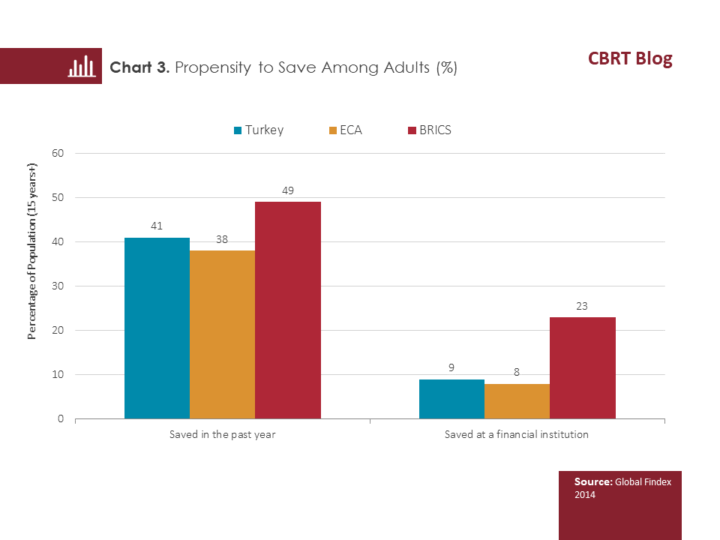 In sum, although the financial reporting system in Turkey has recently made significant progress, the majority of the population is uncovered by the financial, hence, the credit reporting system. As savings rates are also low, integration with the financial system cannot be fully achieved. Besides, although the use of technology in payments has increased, it is yet to reach desirable levels. Against this background, it will be beneficial to expand the credit reporting concept to develop a comprehensive database as a part of financial inclusion, to increase financial literacy, to ensure collection of SME data at international standards and include them in credit reporting and to improve public and private sector cooperation in this regard.

This report refers to the progress made in credit reporting and developments that contribute to financial literacy in Turkey.

[6] Financial Stability Committee was established to coordinate financial stability-related policies and practices among relevant institutions in Turkey. Led by the Minister to whom the Undersecretariat of Treasury is affiliated, the Committee is composed of the Undersecretary of Treasury and The Central Bank of The Republic of Turkey, Banking Regulation and Supervision Agency, Capital Markets Board of Turkey , and the Savings Deposit Insurance Fund.

[7] The Risk Center has approximately 180 members comprising but not limited to banks and financial institutions, credit insurance companies, Borsa İstanbul, and the Central Union of the Agricultural Credit Cooperatives of Turkey.

[8] The risk report indicates the financial credit score of a customer based on their performance over the past 5 years. It is a parameter ranging from the most risky score of 1 to the least risky score of 1900. The categories prescribed are: highest risk, moderate risk, low risk, good, and very good.

Cheque report is a report that includes information, whether positive or negative, regarding all cheques that have been used in the past and have already been drawn, yet to be paid. Different from the Risk Report, it enables tracking of the debt payment patterns of individuals or corporates vis-à-vis non-financial markets. It encompasses a rating scale for the cheque index between 0 and 1000, where 0 denotes the riskiest and 1000 denotes the most risk-free situation.

Personal Indebtedness Index (PII): A service that the KKB offers to its member financial corporations. PII is a score-based index developed to identify risky persons with a clear payment history. It serves as an early warning mechanism to identify persons who are inclined to run up excessive debts even though they may not have shown any signs of repayment problems in the past. PII is a model to predict those persons who will become excessively indebted within one year following the inquiry, even if they are not expected to become insolvent during the respective period.

Ömer Kayhan Seyhun is a Central Bank Specialist at the CBRT.