Do Cyclical Fluctuations Have a Permanent Effect on Employment?

Flexibility in labor markets should be handled with pros and cons. Even if low costs incurred by firms when meeting the labor demand from the free market is preferable in terms of the economy’s resilience against shocks, the cumulative effect to stem from rapid lay-offs on the economy should also be taken into consideration.

The long-term effects of temporary economic contractions on the employment are called the hysteresis effect. Assume that a temporary decline in aggregate demand is perceived as permanent by firms and this perception brings about layoffs instantly. The firm-specific skills obtained through long years of experience by qualified workers who lose their jobs (or firm-specific human capital with a wider definition) will disappear for the firm with the worker. Even if the firm can hire new workers easily in the future as demand recovers, it will take time for these new workers to catch up with the level of firm-specific skills of the fired workers. From the perspective of the workers that lose their jobs, they will lose the opportunity to have access to on-the-job learning, their human capital will depreciate, and it will get harder for them to return to the labor market if unemployment lasts long.

Bearing the aforementioned firing costs is directly proportional to the permanence of the fall in aggregate demand for the firm. If the firms could identify the decline in aggregate demand as short-lived, then they might incur the cost stemming from low demand for a short time rather than firing. Our main assumption here is that policy-makers consider implementing demand management policies believing that the decline in demand will prove temporary. However, firms may carry out lay-offs before the effect of these policies are manifest due to lack of information.[1] In this note, we show that costs considered frictional such as hiring and firing costs may draw down the above-mentioned hysteresis effect in the Turkish economy by creating a buffer zone. If lay-offs are costly, then firms may delay lay-offs until they become certain that demand actually declines. This can, in turn, prevent any short-term fall in demand from causing long-term effects and provide the governments with a time span to implement efficient demand management policies.

Economic literature accommodates two opposing ideas regarding firing costs. One side claims that a reduction in firing costs will help firms to hire workers in the first place and enhance the firms’ resilience against shocks. This side advocates a labor market as flexible as possible. The other side asserts that facilitation of lay-offs will lead to increased insecurity, which in turn will cause workers to be reluctant to build firm-specific skills, and this will reduce both the firm’s and the country’s competitive power in the long term. Moreover, a decline in job security amplifies the effect of changes in output on unemployment. This effect is significantly stronger in the US, where firing costs are low, compared to Japan, which has high job security (Blanchard, 1999:170).  The following chart illustrates that job security in Turkey is above that in the US and the OECD, but below the averages of the EU. 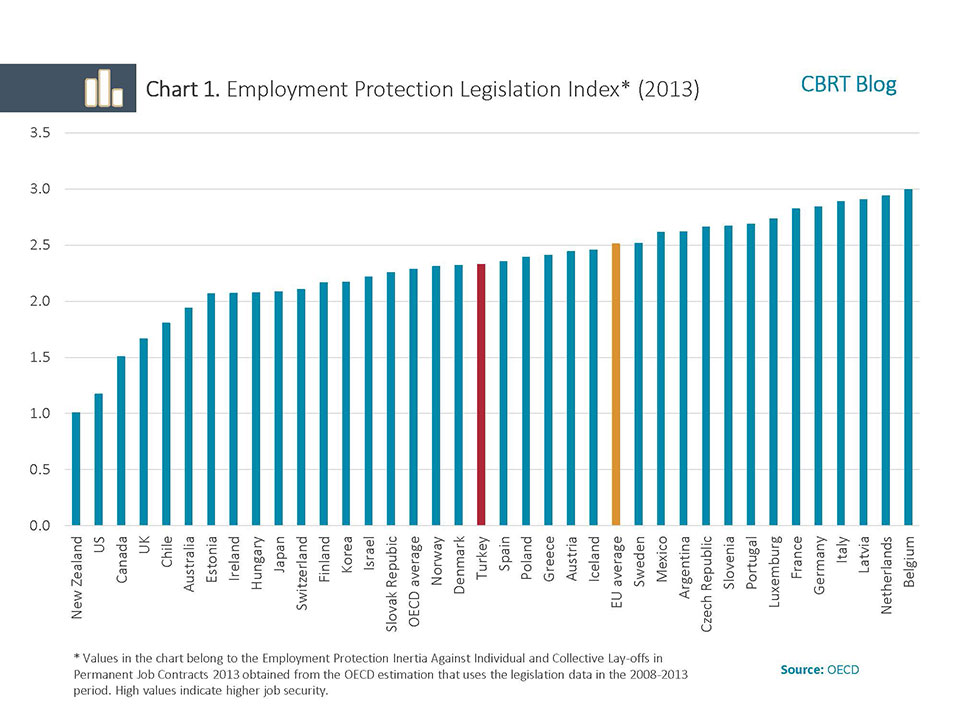 Human capital accumulation obtained on the job is beneficial not only to the firm but also to the society. In the case of a change in the employing firm, the worker can use the skills in the new job. Thus, the short-term benefit the firm obtained after hiring the worker and firing him/her for a short time may prove inconsistent with the long-term social benefit that grows with the human capital accumulation of the worker. This asymmetry may decrease when the worker experiences no /little breaks in working life in one firm or various firms. Reduction of firing costs may seem in favor of the firm in the short term, yet it may bear implications both for the firm and the community in the long term.

Implementing stationarity analysis requires consideration of certain characteristics of time series. Firstly, assume that there is an upward or downward trend in the unemployment rate rather than a constant mean[2]. This trend may change in a certain period due to structural reasons. For example, changes such as technological developments, automation or increased participation of women in the labor force may change the underlying trend of employment.[3],[4] While testing whether cyclical fluctuations disappear within time, we should also consider these structural changes.

Secondly, due to the above-mentioned frictional effects, the unemployment series may not react fast to small shifts around it. We can think of this as a buffer zone around the mean. If hiring or firing had zero costs, firms would change the number of their workers upon a minor change in demand, which could cause permanent effects in the economy due to the long-term effects we mentioned. However, a positive firing cost creates a buffer zone around the mean and slows down hiring and firing. Moreover, as these costs vary among firms, the correction movement toward the mean will be gradual. Therefore, a correction movement is seen only if the mean shift is above a certain level.

The above-mentioned two issues call for the consideration of structural breaks and non-linearities in the long-term analysis of unemployment series. Akdoğan (2017) carries out this analysis for 33 countries including Turkey. It is concluded that a hysteresis effect does not exist in unemployment in Turkey when a non-linear modelling technique is used which considers these frictional effects can create a buffer zone around the mean that averts sudden movements in employment. If we did not take these frictional costs into consideration in analyzing time series, we could conclude that temporary effects lead to permanent effects on employment in Turkey. The study also concludes the same for some of the countries in eastern and northern Europe. The employment protection legislation index issued by the OECD indicates that job security is relatively high in these countries. Therefore, a certain level of job security can have a cushion effect preventing temporary shocks in the economy from becoming permanent.[5],[6]

In sum, flexibility in labor markets should be handled with pros and cons. Even if low costs incurred by firms when meeting the labor demand from the free market is preferable in terms of the economy’s resilience against shocks, the cumulative effect to stem from rapid lay-offs on the economy should also be taken into consideration. Policy-makers may want to implement demand management policies (or active labor market programs from a more structural perspective) to cushion economic fluctuations. On the other hand, as firms do not have a data set as wide as policy-makers, they may make sudden lay-off decisions considering that fluctuations in the economy will be permanent. These policies may not only be detrimental to the firm and the worker in the long term but also amplify the effect of the short-term shocks for the economy in general and reduce the effect of policies such as demand management or active labor market programs of governments. Accordingly, it should be considered that hiring and firing costs may have the cushioning effect to buy the time required for the effects of these policies to appear.

[1]  In economic literature, there are many studies assuming that there is information asymmetry between firms and policy-makers.

[2] A change in the trend emerges as breaks in time series. Time series may fluctuate around a certain trend in a certain period and around another trend in another period.

[3] In Turkey the participation ratio of women in the labor force was 34 percent in 2017. This ratio is well below the EU average of 51 percent, yet has been on the increase in recent years.

[4] Due to technological improvements, the gap between employment and wages of qualified and unqualified workers is getting wider (Meschi, Taymaz and Vivarelli, 2016). From this viewpoint, education reforms (formal education and adult education) that may increase the ratio of qualified workers has the potential both to draw down the long-term trend of unemployment, and  reduce the permanent effects of unemployment handled in this study.

[5] It is also asserted in the study that a change may occur in the underlying trend of unemployment in Turkey after 2008 (i.e., a structural break in the unemployment series in technical sense). When our non-linear modelling also takes these breaks into consideration, we reach the same conclusion.