Firm investment rates have recently diverged in Turkey. Incentive policies should be designed in such a way as to aim for mechanization, particularly R&D-backed and high tech-based mechanization, in manufacturing industry in the long run, by taking into account differences in the breakdown of investments.

Investment constitutes a key component of economic growth. Considering the fact that investment is mostly carried out by the private sector, analyzing the investment behavior of firms helps to understand the basic dynamics of economic growth and to design the relevant policies more effectively. With this in mind, we examined investment behaviors of manufacturing industry firms registered in the Enterprise Information System (EIS) of Ministry of Science, Industry and Technology by analyzing balance sheets and income statements for the period of 2006-2016. This unique data set provides a breakdown of capital goods by type, such as machinery and equipment, construction and vehicles for about 325 thousand firms that adds up to 1.6 million observations. After data cleaning, 261,300 firms and 1.2 million observations were included in the base sample for analysis. This new sample represents more than 90 percent of total assets and fixed capital stocks of all the firms recorded in the raw data.

The main variable of the analysis, investment rate, has been calculated as the ratio of real investments to real net sales, in line with the economic literature.1 Real investment is defined as the change in the nominal capital stock that is deflated by the capital goods price index 2 , and the real net sales is computed by deflating the net sales by the two-digit sectoral producer price index. 3  Before proceeding with the analysis, we present an overview of the concordance of investment calculated using EIS data with the official macroeconomic investment series published by the Turkish Statistical Institute (TurkStat) in Chart 1. As shown in the chart, the growth figures in plant-machinery-equipment 4 investments in manufacturing industry calculated from the EIS and total machinery-equipment calculated from TurkStat data, move together.5 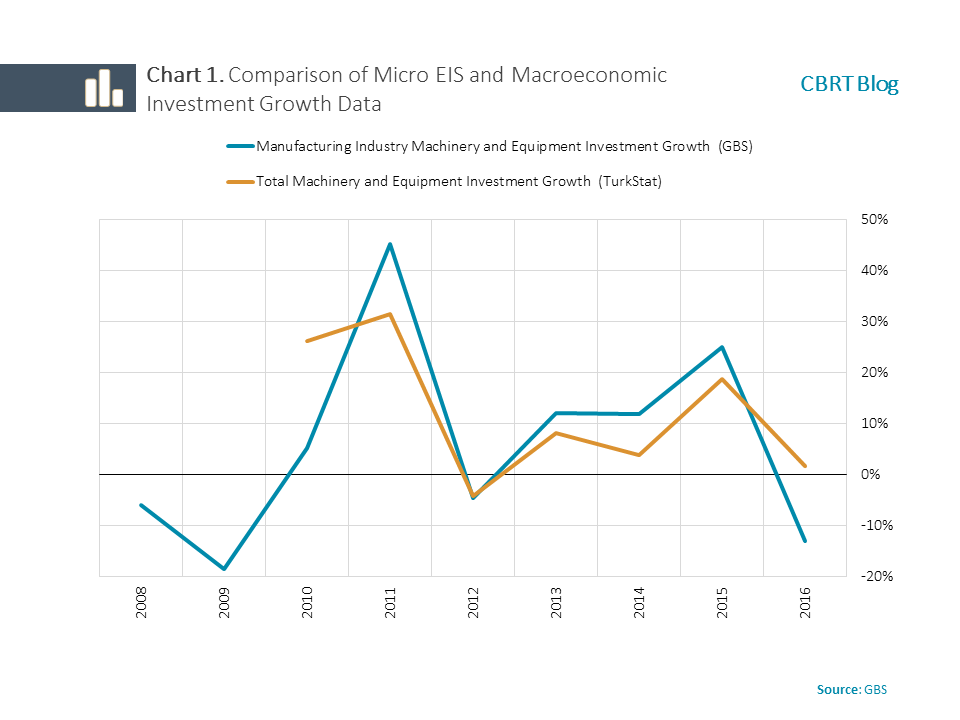 It is evident from Chart 2 that total firm investments were generally on the rise between the 2007-2016 period, with short-term declines in some years. These declines happened (1) in 2009 when the global financial crisis took a toll, (2) in 2012 when the debt crisis emerged and (3) in 2014 when emerging economies including Turkey witnessed interest rate hikes and exchange rate fluctuations in response to the Fed’s tapering its asset purchases. Additionally, it should be noted that geopolitical developments by the end of 2013 and beyond were also instrumental in these declines. The orange line in Chart 2 shows the average firm investment rate, while the red line shows the sector weighted investment rate by net sales. Due to the large number of small firms in the manufacturing industry, the average firm investment rate is dominated by the tendencies of small firms, and similarly, the sector investment rate rather reflects the trend of relatively larger firms. Accordingly, after 2011, investment rates for large firms generally increased, whereas those for small firms posted a limited decline. 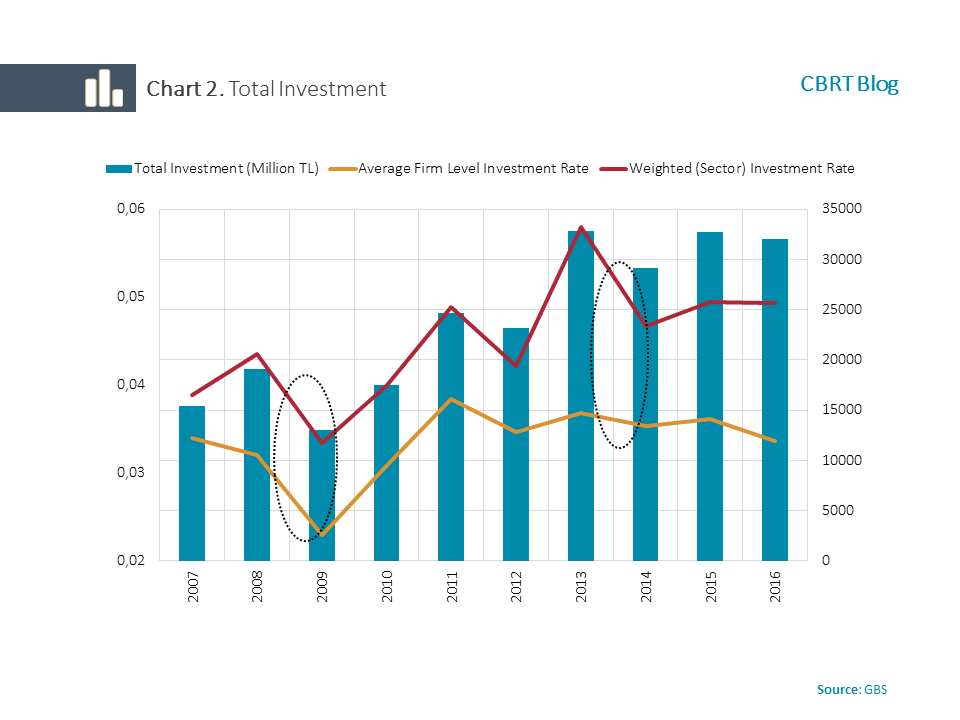 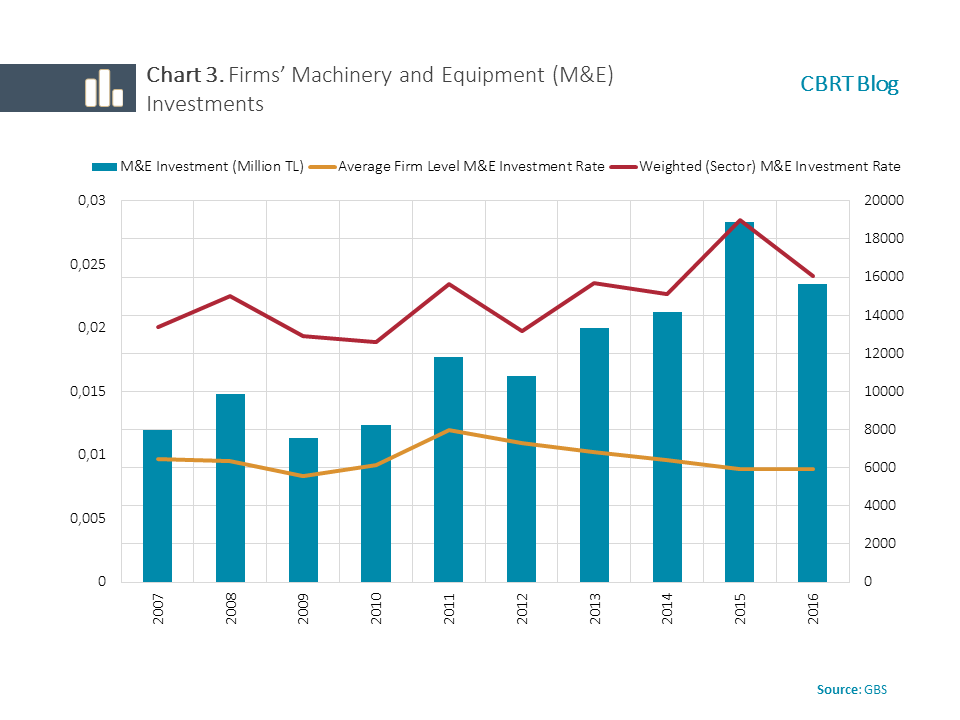 In contrast to the other capital types, investment rates for non-residential construction have been on the rise since 2011 both on sector and average bases (Chart 4). This observation may be due to firms’ tendency towards investing in real estate to benefit from increasing asset prices, which is in accord with the general construction investment trend shown by the macroeconomic data. 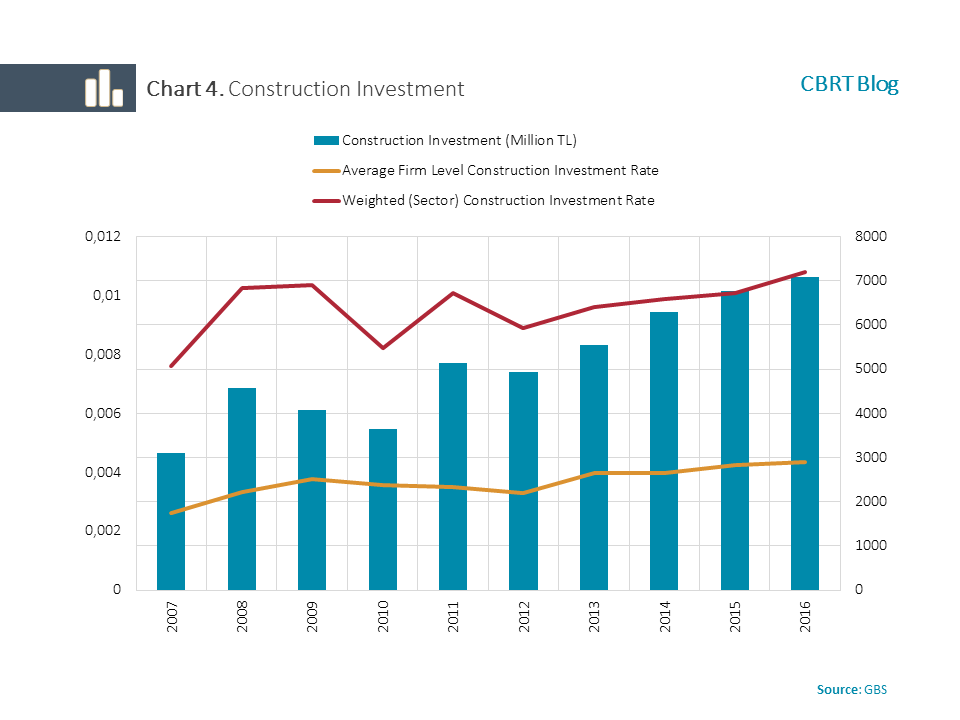 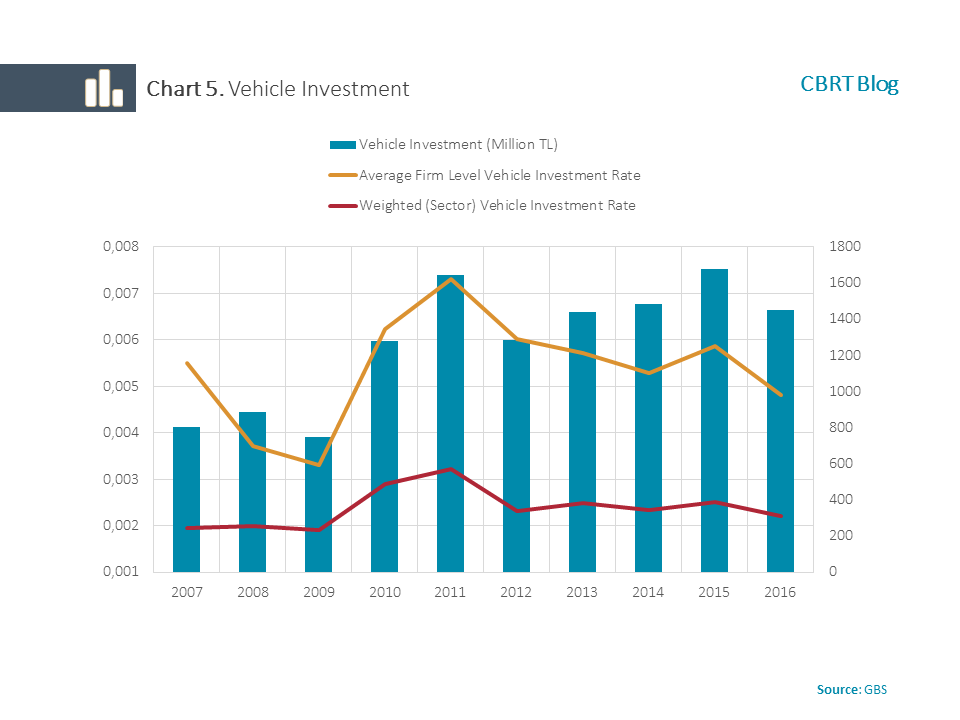 Understanding the reasons for small manufacturing firms’ allocating a significant portion of their limited capital to vehicles gives an insight into grasping the sector’s dynamics. For instance, registration of family vehicles for personal use as a firm investment due to the tax advantage and prestige related concerns can be cited as possible explanations. As a matter of fact, small firms’ vehicle investments started to trend down after the relative increase of the special consumption tax on passenger cars in the post-2011 period, which supports this assertion (Chart 5). In the light of these findings, while devising incentives for small firms, it would be beneficial to promote policies that particularly boost the machinery and equipment investments. 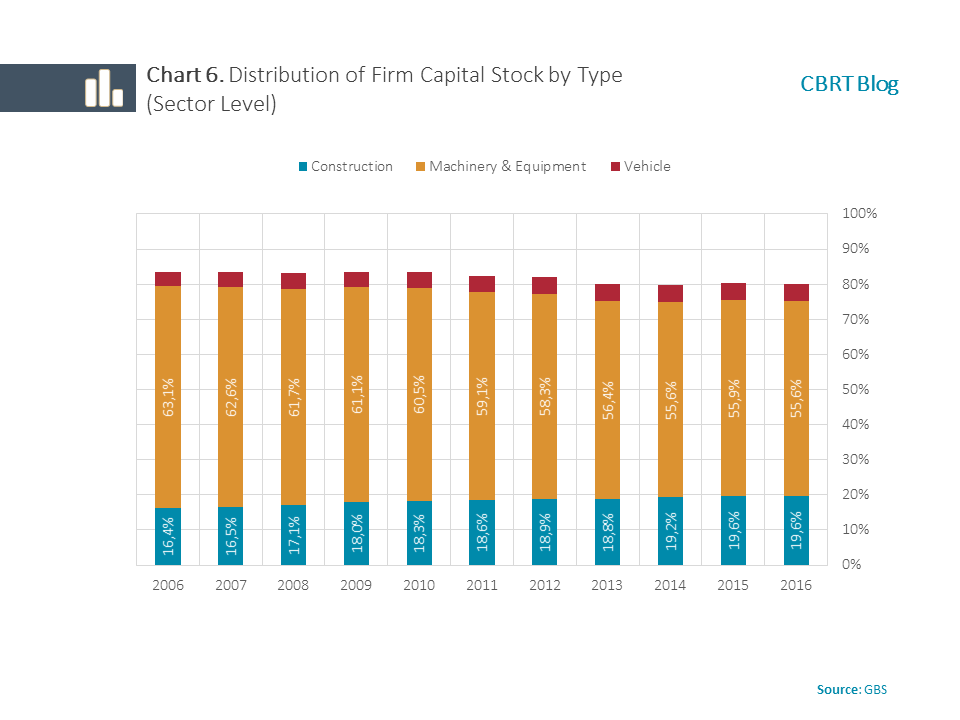 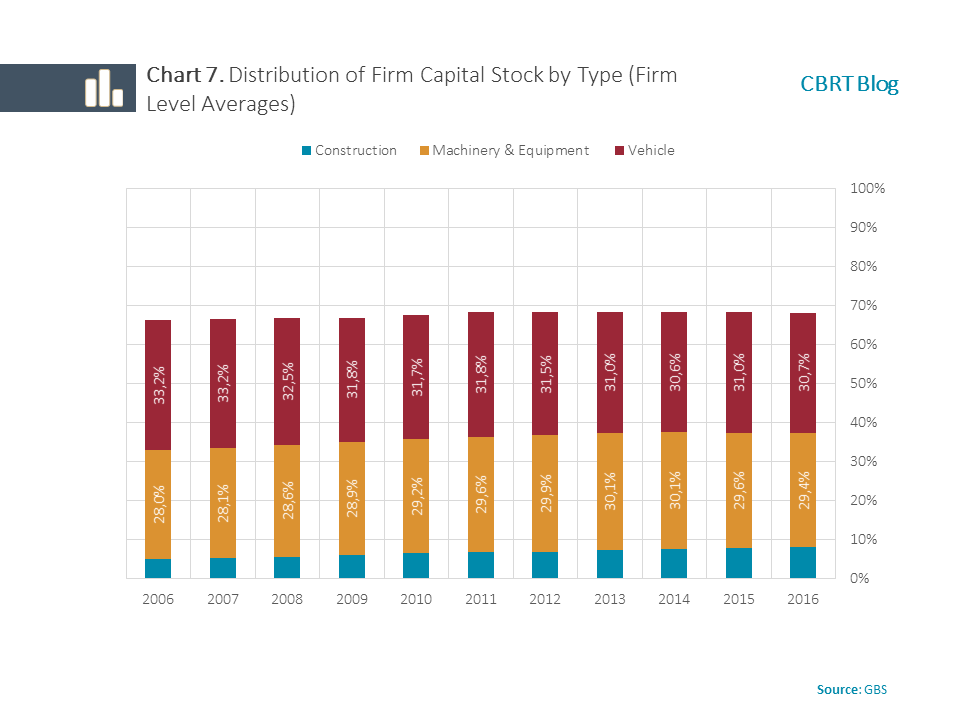 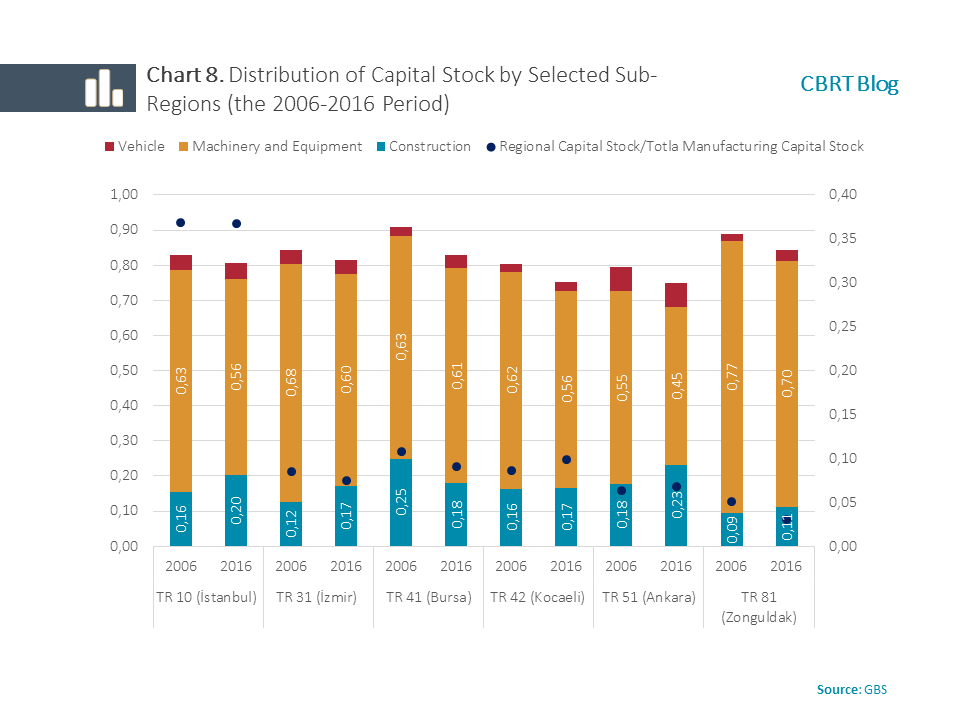 Firm investment rates have recently diverged in Turkey. Investments of large firms, predominant in the industry, have increased more rapidly than their sales, whereas those of small firms have been on the decline. The decline in investments of small firms might be attributed to a variety of reasons. The major ones cited in the related literature are decreased profitability of firms and difficulties in access to finance. In this sense, it is important to support accessibility of productive small firms to investment loans.

In the meantime, considering the vehicle-oriented propensity to spend, it would be appropriate to focus on policies that can directly encourage machinery and equipment investments, while designing incentives for small manufacturing industry enterprises. It should be noted that the increase in construction investments, as evident from region-based analyses, moves in tandem with macroeconomic trends of the construction sector in Turkey. In sum, incentive policies should be designed in such a way as to aim for mechanization, particularly R&D-backed and high tech-based mechanization, in manufacturing industry in the long run, by taking into account differences in the breakdown of investments.

iii We processed with total investment and machinery and equipment investment accounts as explained above. While converting construction and vehicle investments into real terms, we used Construction Cost Index, and the Motor Vehicles Index sub-item of the CPI, respectively.

iv In this study, capital investment and stock definitions have been obtained from the information reported in current firm balance sheets. According to the scope of balance sheet accounts, “252 Buildings Account” comprises business administration buildings and building types other than production facilities such as education, health, recreational facilities and buildings used for storage purposes. The “253 Plant, Equipment, Machinery and Tools Account” covers all facilities, equipment, machines, and tools used for production purposes. Finally, the “254 Vehicles Account” includes all types of land, water and sea vehicles and air vehicles.

v Minor differences between trends can be attributed to the fact that total machinery and equipment investments in the TurkStat data are inclusive of all sectors. Although macro series are not published exclusively for the manufacturing industry, the majority of the machinery and equipment investments belongs to the manufacturing industry firms, which reduces the differences.