Impact of Opening Embassies on Exports

Turkey opened new embassies in 39 countries between 2008 and 2016. This blog post analyzes the impact of this expansion on Turkey’s foreign trade with the relevant countries

Information asymmetry is a significant barrier to the efficient functioning of markets and can be defined as a condition in which the parties to a trade transaction are not fully informed about each other, sales conditions or the traded good. Factors such as language barriers, bureaucratic procedures and security concerns further increase information asymmetry in international trade and make it harder for firms to enter into a new external market. Though costs driven by information asymmetry have decreased thanks to improving communication and transportation technologies, they still occupy an important place in firms’ decision equations. On the other hand, in addition to providing consular services and pursuing political interests, countries also expand foreign missions such as embassies, consulates, and export promotion agencies to enhance international trade and facilitate firms’ businesses and transactions (Rose, 2007). These institutions directly support exports by way of experts promoting the country’s laws and regulations, searching for export opportunities, and informing local business people.

Turkey opened new embassies in 39 countries between 2008 and 2016 (Table 1). This blog post analyzes the impact of this expansion on Turkey’s foreign trade with the relevant countries (Bağır, 2019). 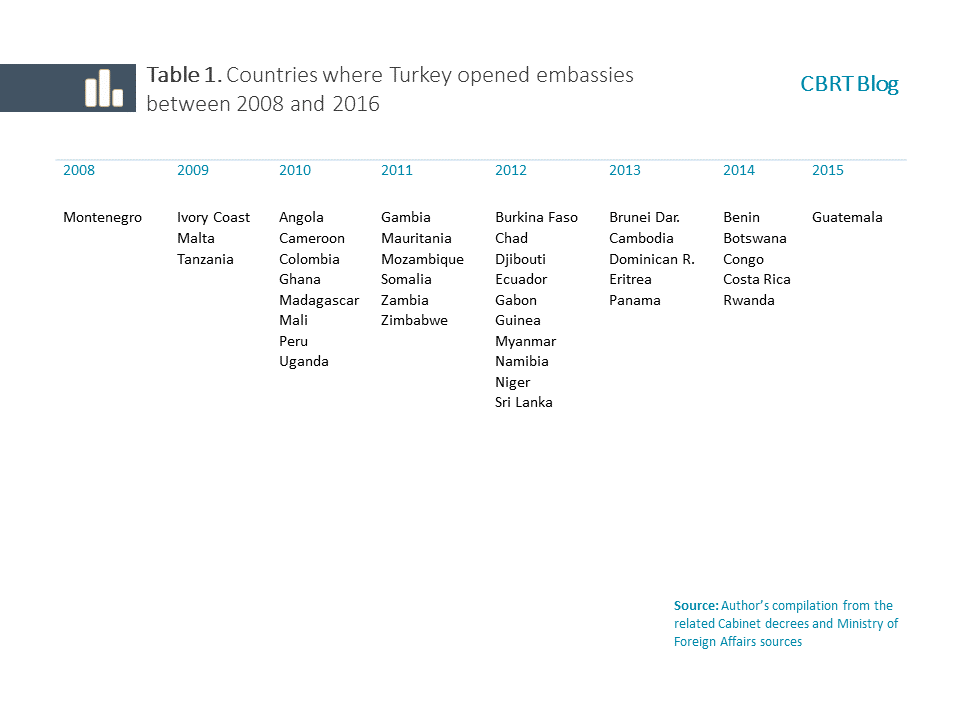 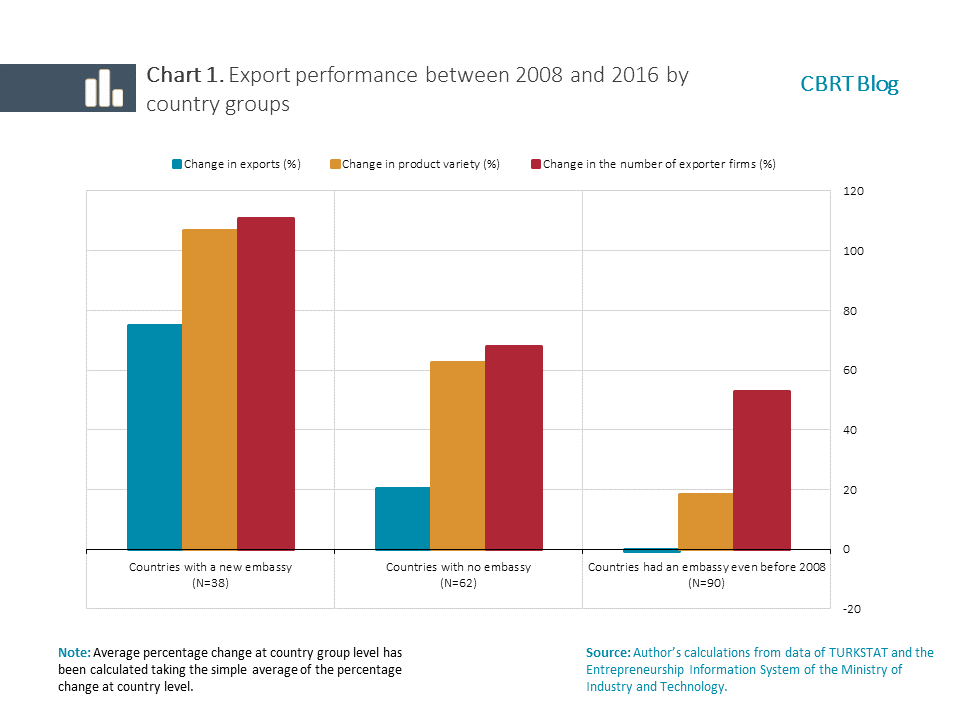 The limited number of studies in the economic literature that investigate the foreign trade impact of embassies and other foreign missions largely employ cross-sectional analysis for estimation (Segura-Cayuela and Vilarrubia 2008, Rose 2007). However, since cross-sectional analysis does not control for country fixed effects, it is difficult to ensure econometrically that the impact found is due to the presence of embassies. Turkey’s opening of 39 new embassies in a relatively short time period allows for a more reliable estimation of the impact through the use of panel data analysis techniques.

Yet, even in panel data analysis, it is not possible to assert that the impact found is unbiased if the new embassies have been opened in countries with a strong economic growth trend or with an already positive exports trend. To find out whether this reverse causality problem exists, we ran a simple regression test. We created dummy variables for each year of the five-year periods before and after embassy openings, and estimated their effect on the natural logarithm of exports using a regression equation. Chart 2 shows the coefficients and confidence intervals for dummy variables obtained from this test. Coefficients do not have a positive trend in the period before the opening of embassies, which suggests that there is no reverse causality. 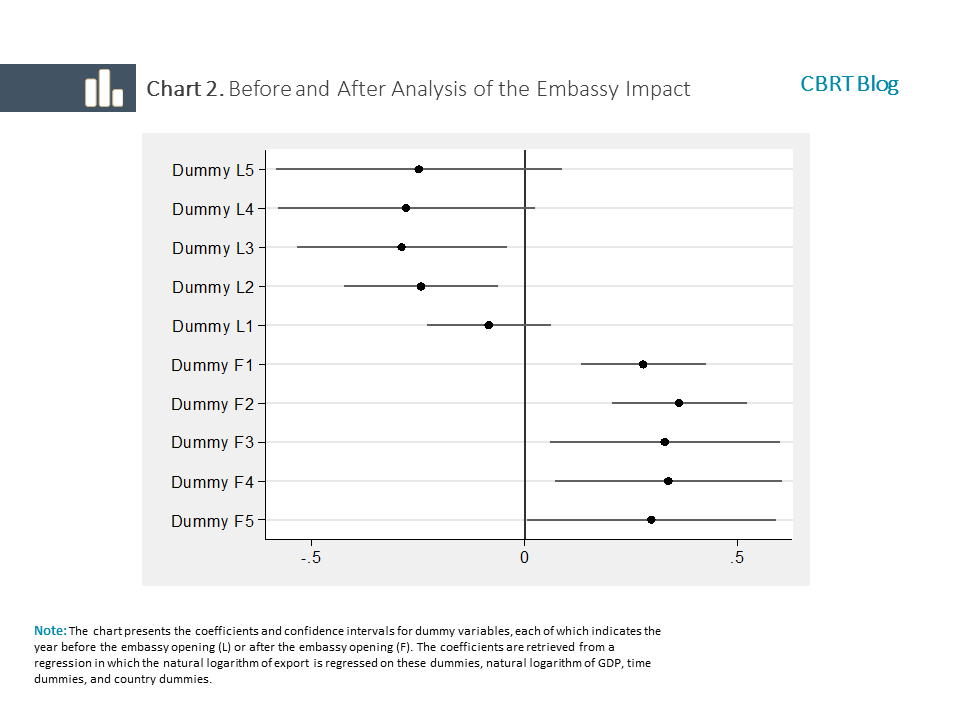 Nevertheless, to eliminate reverse causality concerns, the foreign trade impact of embassies has been econometrically estimated by also controlling for country-specific time trends (Annex Table). Accordingly, opening an embassy in a country increases total exports to that country by 26.9%. Categorizing export goods as differentiated and homogenous, it is seen that the positive impact on exports results from the increase in exports of differentiated goods (where sunk costs due to information asymmetry are higher)1.  On the other hand, a look at the contribution of increased variety of goods and new exporters to the growth in exports reveals that opening an embassy increases the variety of goods by 9.9% and the number of exporting firms by 7.7%.

Since Turkey’s exports to countries where a new embassy has been opened have a small share in its current total exports, a sizable impact on the country’s exports should not be expected in the short run. However, Turkish firms’ new contact with these predominantly African and Latin American countries through our embassies will enable them to get larger shares from the potential economic growth in these regions in the long run. Additionally, this will provide Turkish firms with an alternative in the face of possible periodic shocks in conventional markets. In fact, between 2011 and 2016 when international trade contracted by approximately 13% driven by developed countries, Turkish firms managed to increase the level of Turkey’s total exports on the back of market diversification (Bağır and Torun, 2019). 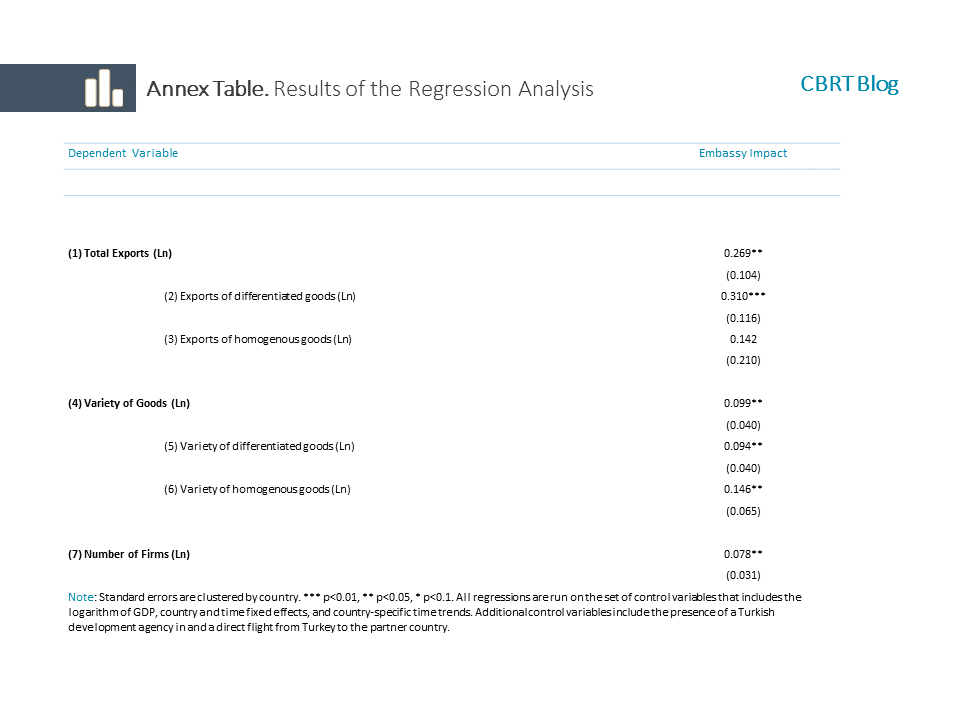