Inflation Dynamics from a Bayesian Perspective

In Turkey, exogenous factors such as exchange rates and import prices have a significant impact on inflation. Estimates of pass-through from exchange rates and import prices to inflation allow us to make quite clear policy inferences as they contain no significant uncertainty. Nevertheless, pass-through from economic activity and wages to inflation contains a wider uncertainty band.

For central banks implementing an inflation targeting strategy, it is very important to understand the speed and size of the impact of key macroeconomic variables on inflation. Therefore, it is a very popular study area for researchers to determine the reaction of inflation in the face of shocks to key variables such as exchange rates, international prices, growth and wages. Aspiring to contribute to the prevailing stance towards inflation dynamics in Turkey, in this blog post we will assess the impact of these key variables on inflation by using a method that takes into account the estimation uncertainty.[1]

The relation between inflation and its key determinants may not be one-way. In Turkey’s case, we can talk about a spiral in which past inflation influences wage increases and in turn increase in wages pushes inflation up. A similar interaction is also observed between exchange rates and inflation from time to time. Therefore, we should take into account the two-way causality between these variables. Vector autoregression (VAR) models allow us to analyze such relations. The impulse response functions generated by using the VAR models enable us to make inferences on the speed and size of pass-through.

We adopt a Bayesian approach (BVAR) as the sample is short. This allows us to reflect our prior knowledge about some estimated parameters into the model.[3] Another advantage is that, by employing this method, we can provide parameter estimates in a distributional form, thus we can make inferences on the uncertainty around the estimated average impacts.

The common question of the VAR models, and actually all econometric models, is whether the impact/coefficient that is tried to be measured is based on a correct “identification”. In the simplest terms, while making a correlation analysis of two variables, one should first judge if the variables have a common driver. For instance, as will be explained in the following parts in more detail, we can talk about a common component that may cause import prices and domestic economic growth to move in the same direction. Control variables and model restrictions help us make a correct identification. In short, our identification strategy relies on economic theory and our pursuit of obtaining relations consistent with theory.

Let us first talk about exogenous control variables. In the model, global risk indicators (EMBI-global), global growth, tax rates on domestic fuel-oil prices, and unprocessed food prices excluding fresh fruits and vegetables are used as exogenous variables. The part of fuel-oil prices that cannot be explained by import prices and exchange rates can be attributed to the changes in lump-sum tax, and actually the share of lump-sum tax in fuel-oil prices is quite high. To control for such impacts, we need to include the related tax variable in the model as an exogenous variable. Unprocessed food prices excluding fresh fruits and vegetables are included in the model to control for the price movements (for instance red meat prices) caused by domestic supply shocks and that cannot be explained by key variables.

The other two exogenous variables in the model (global growth and global risk) reflect our motive to be consistent with the theory on the direction of macroeconomic relations. Periods of strong global growth and increased risk appetite are generally marked by rising commodity prices and at the same time accelerating capital flows to emerging markets that lead to robust economic activity in these countries. This transmission makes import prices and domestic growth move in the same direction and conceals the fact that a rise in import prices is actually an adverse cost shock with respect to domestic economic activity. Therefore, it is very likely that we will see a positive correlation between these two variables. To be able to identify the cost channel, we include control factors for global growth and risks that we believe to be the common drivers of the two variables.

Secondly, let us mention the parameter constraints (zero restrictions). In small-open economies, international prices are not expected to be influenced by domestic variables. Therefore we include a constraint in the model in this sense. Another restriction is that wages are not affected by global risk, global growth and changes in taxes on fuel-oil. More clearly, we can assume that these variables have no impact on wages via separate channels other than growth and inflation.

Chart 1 shows the pass-through effects on inflation in Turkey generated by using impulse response functions from the BVAR model. The graphs show the cumulative reaction of inflation to a shock to each variable by quarters. We present median estimates as well as distributions in the graphs. Thus, we can observe the size and speed of shock transmission as well as the uncertainty pertaining to these estimates all at the same time.

Based on median responses, key findings can be summarized as follows: A 10 percent depreciation of Turkish lira against the exchange rate basket causes a 1.6 percent rise at the end of the first year and a 1.7 point rise in inflation at the end of the second year. Approximately 40 percent of the pass-through is completed in the first quarter and 80 percent is completed in the third quarter. Accordingly, we can assert that there is a significant pass-through from exchange rates to inflation in the short term. These results are broadly consistent with former studies that were conducted at the CBRT.

Meanwhile, a positive 10 percent shock to import prices in terms of US dollars causes a 1.3 percent rise in inflation by the end of the second year. Pass-through from import prices to inflation is faster than pass-through from exchange rates to inflation in the short term and most of the pass-through is completed in a relatively shorter time bracket (in two quarters). These results suggest that the impact of exchange rates on pricing behaviour goes beyond the cost channel. Historically, as being a means of protection against inflation and due to its interaction with expectations, exchange rate plays a pivotal role in the inflation process. 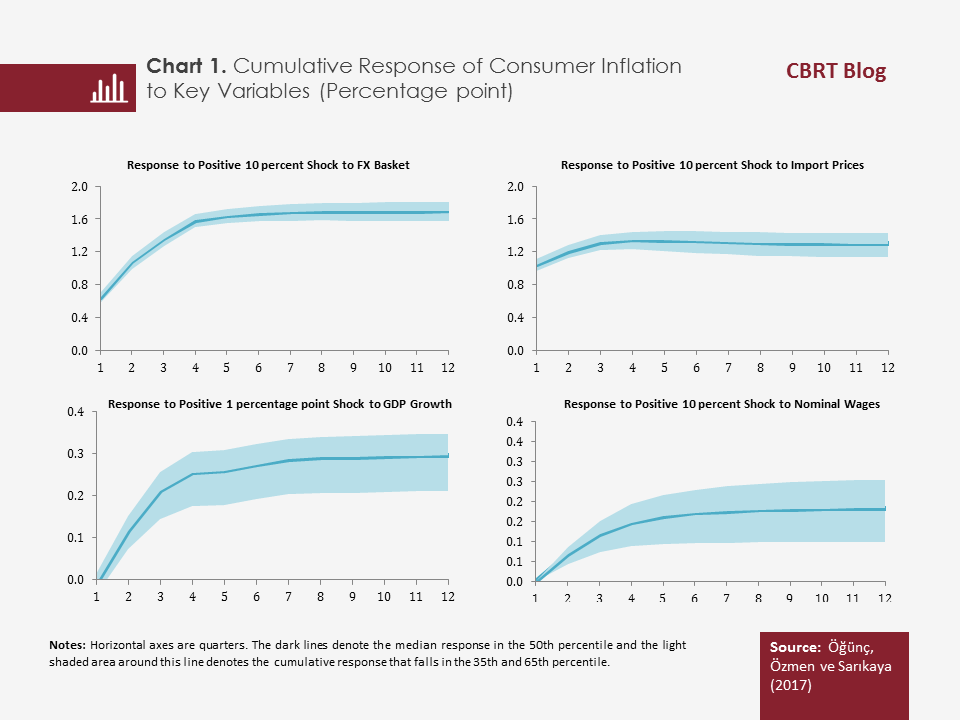 [2] Stationary forms of the series are used in the model.

[3] Prior information can be regarded as economic judgements on the magnitude of elasticities (i.e. exchange rate pass-through on inflation) or on economic relations (i.e. a zero restriction implying that small economies do not affect international prices), incorporated into the model.