Our findings suggest that measures taken to simplify the operational framework of monetary policy have significantly affected the liquidity management behaviors of banks.

Halil Güler is a Central Bank Specialist at the CBRT.

Şule Şenel Tabak is a Central Bank Specialist at the CBRT.

The reserve requirement policy, which means that banks hold a certain proportion of their liabilities subject to reserve requirement as a risk-free asset at the central bank, serves to limit the total risk of the banking sector. The free deposit item maintained by banks at the Central Bank of the Republic of Turkey (CBRT), including the required reserves, is the residual value that balances the balance sheet in terms of the liquidity management of the CBRT. All monetary policy operations ultimately affect the current account balance of the CBRT. With the transition to the floating exchange rate regime in the aftermath of February 2001 crisis, the operational structure of the monetary policy, predominated by conventional instruments was overhauled and a new framework was introduced supported by unconventional instruments. In tandem with the new liquidity management strategy, several regulations were introduced to make the banking sector’s liquidity management more effective and more flexible. In this context, the CBRT started to use the required reserves as an active policy tool and made several amendments changing the cost, scope and implementation of TL reserve requirement policy, which among others included the remuneration of required reserves, the maintenance of required reserves as an average for the reserve maintenance period, and the Reserve Options Mechanism (ROM) that allows maintenance of a portion of required reserves in US dollar, euro or gold/scrap gold.

In this respect, analyzing the banking sector tendency to maintain free deposits in the two-week period is critical given its support to CBRT’s liquidity management. This tendency is basically affected by liquidity shortage or surplus conditions in financial markets, the level of the funding need of the system (FNS), the ratio of banks’ free deposit balance to FNS, and the CBRT’s funding strategy.

According to our analysis, there are structural differences in the banking sector’s tendency to maintain free deposits depending on the existing liquidity management strategy and the level of FNS.  The Turkish banking sector had a predictable tendency to maintain free deposits between 2002 and 2009 due to the prevailing structural excess liquidity conditions (Chart 1). 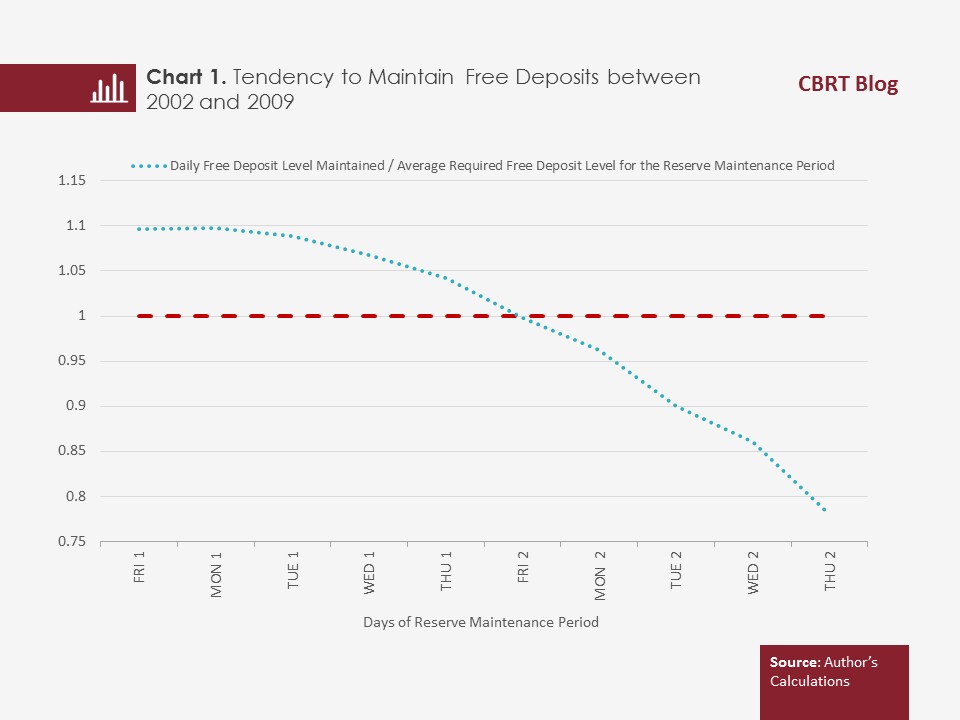 In the period between 2010 and 2016, the liquidity shortage conditions that assumed a structural characteristic from 2009 onward as well as the CBRT’s high-frequency liquidity policy weighed on the predictability of the tendency to maintain free deposits (Chart 2). Meanwhile, the ratio of free deposits to the FNS dropped, driven by the implementation of the ROM (Chart 3). 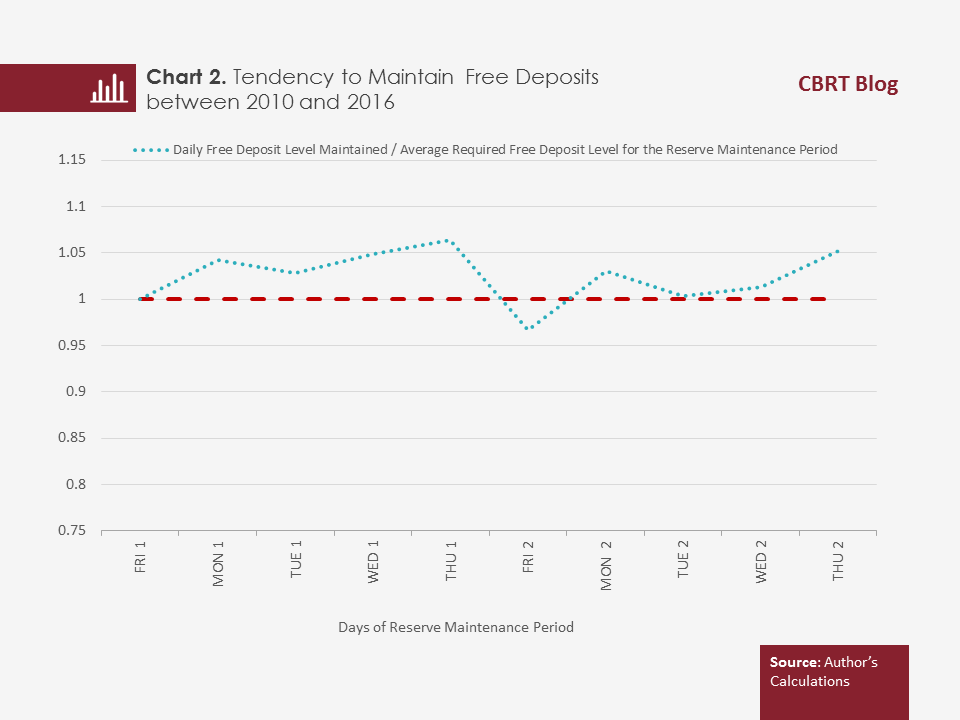 During this period, the liquidity cushion effect of TL required reserves held on a term average basis[1] weakened and thus, the financing needs of banks for their individual liquidity management increased. 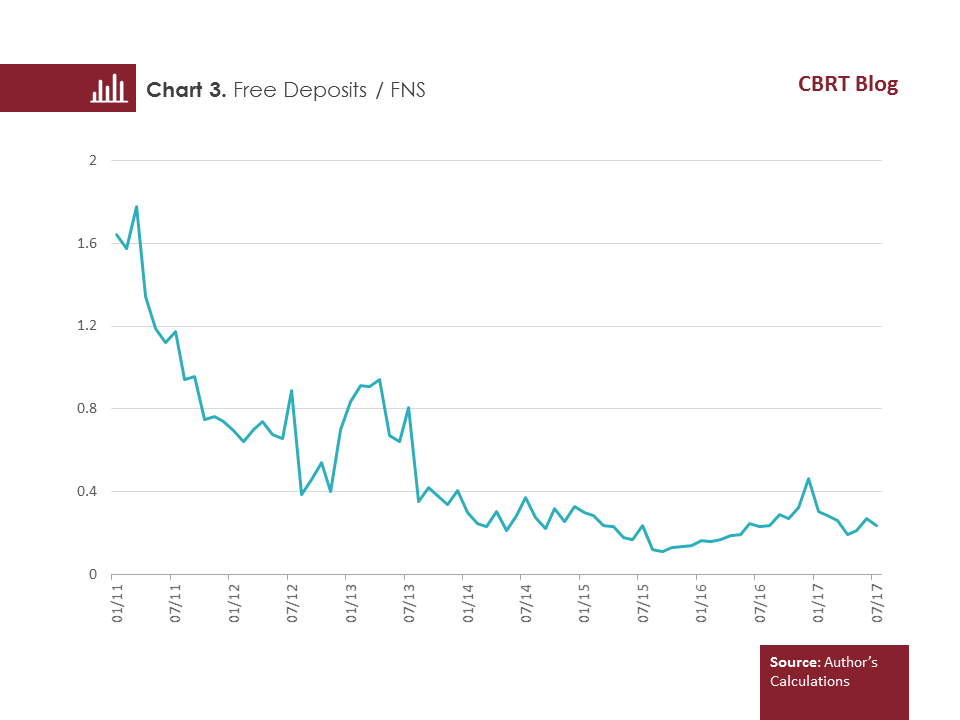 The fall in the free deposits-to-FNS ratio triggered a decline in the banking sector’s level of readily available liquidity at the beginning of the day. Accordingly, banks reliance on receivables from other banks and on money markets, where settlements take place later in the day, rose visibly. As a result, the tendency to maintain free deposits, for precautionary purposes, has become more sensitive to the one-week repo amount provided through quantity-based repo auctions and to the share of this auction amount in the weekly term funding stock (Chart 4). 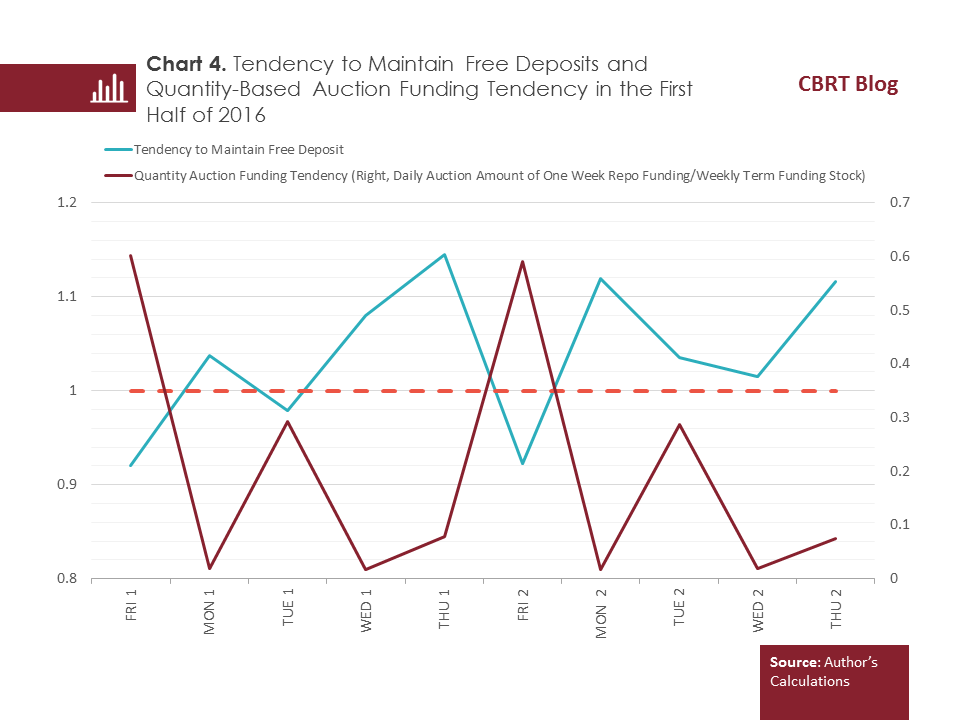 In an effort to enhance the predictability of its liquidity policy and support the effectiveness of the banking sector’s liquidity management, the CBRT made a technical change in its funding strategy through quantity-based auctions provided at the main funding rate as of June 2016 and adopted a method enabling a balanced distribution of the one-week term funding stock across the days of the week (Chart 5). Consequently, the predictability of banks’ tendency to maintain free deposits improved considerably as the precautionary need to hold excess free deposits amid high-volume maturing repo auction returns that concentrated on certain days of the week declined (Chart 6). 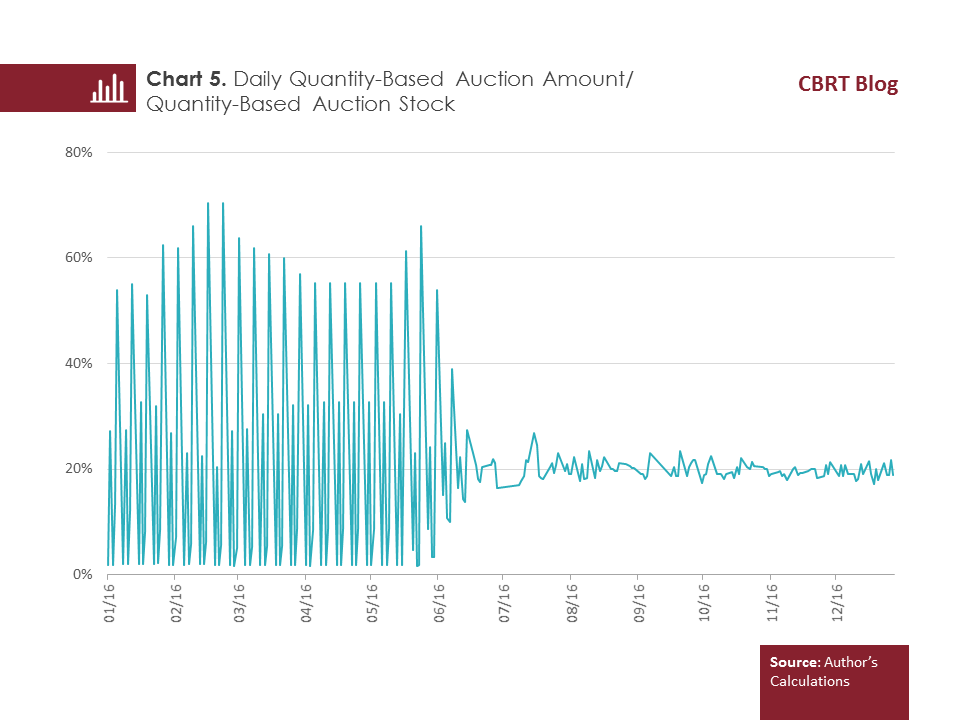 A close look at the standard deviations of banks’ tendency to maintain free deposits since 2011 reveals that the volatility in this tendency has significantly decreased particularly since the second half of 2016, as a result of the simplification steps taken by the CBRT (Chart 7). 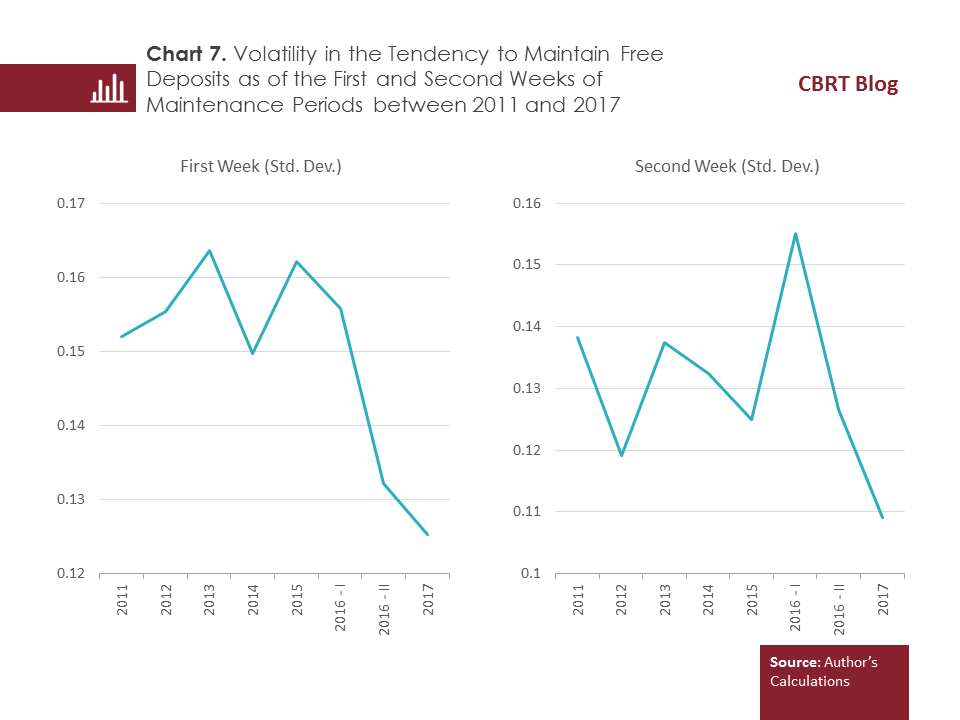 To conclude, our findings suggest that measures taken to simplify the operational framework of monetary policy have significantly affected the liquidity management behaviors of banks. The predictability of the CBRT’s liquidity policy has considerably increased in the recent period in terms of both price and quantity. As a matter of fact, the volatility in the banking sector’s tendency to maintain free deposits has been dramatically declining since the second half of 2016, driven mostly by increased monetary policy predictability in response to recent amendments in the operational framework.

[1] The TL portion of TL required reserves is maintained as a term average and in cash accounts opened with the CBRT. Banks’ balances remaining in Electronic Fund Transfer and Retail Payment systems are transferred to reserve requirement accounts by close of business. These balances, re-transferred to banks’ abovementioned payment accounts at the beginning of the day, serve as an important source of ready to use liquidity for the banking sector.

Halil Güler is a Central Bank Specialist at the CBRT.

Şule Şenel Tabak is a Central Bank Specialist at the CBRT.