Sailing into the Wind: Turkey’s Increased Share of the World Trade Pie

Projections based on World Trade Organization (WTO) data suggest that the uptrend in world trade volume will remain strong in 2018 and Turkey’s foreign trade partners will show a better growth performance than they did in 2017. These projections indicate that the momentum achieved in Turkey’s exports in 2017 will be sustained in 2018. 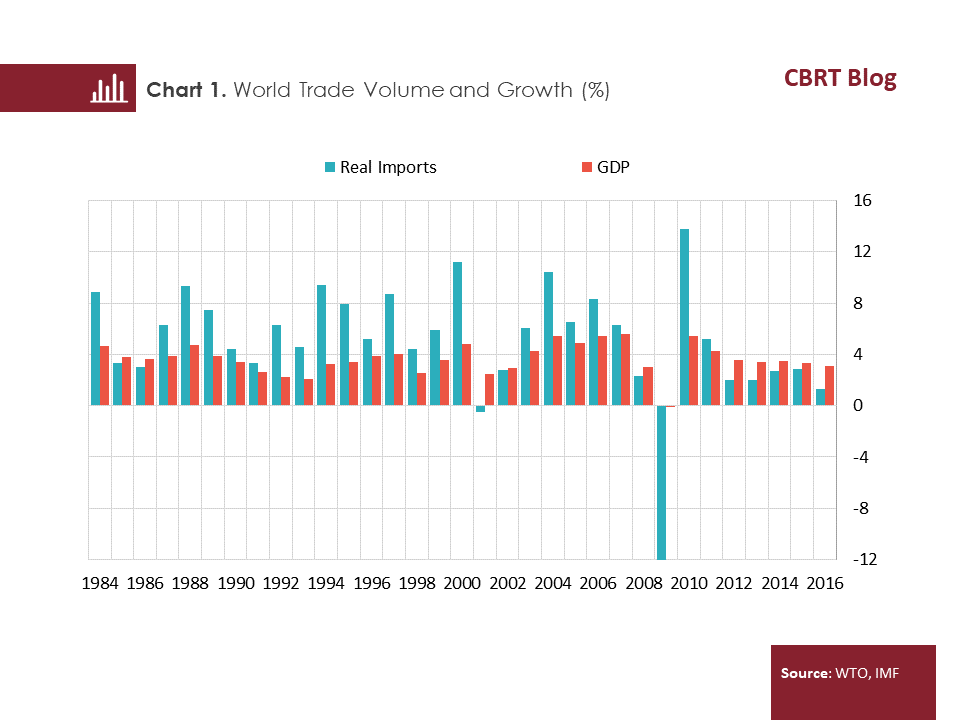 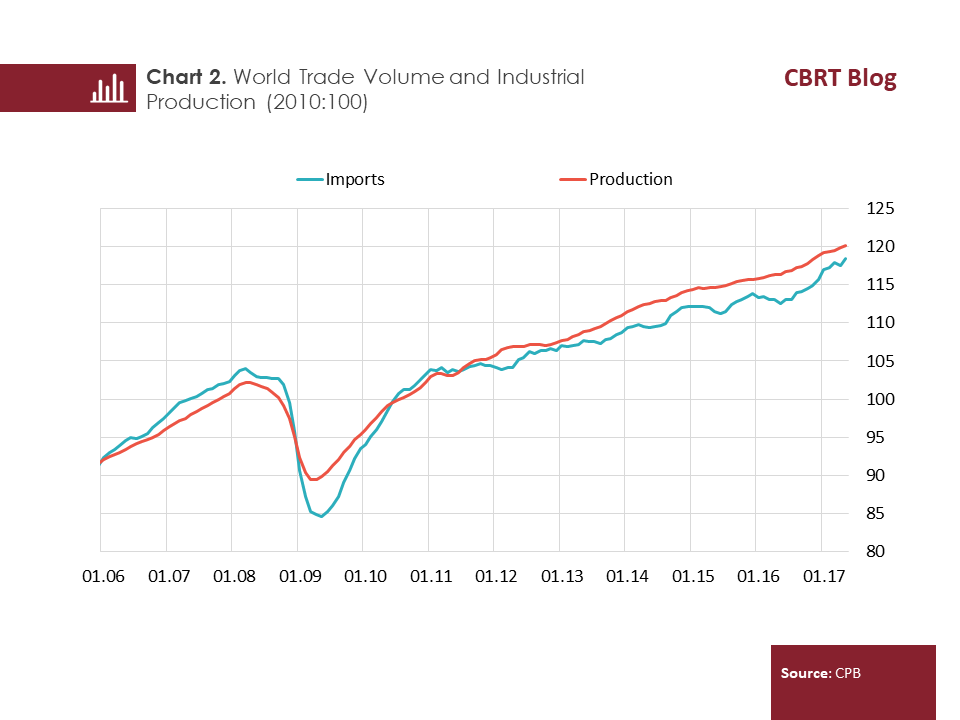 The negative outlook in world trade volume in the post-crisis period has also rapidly reduced the share of world trade in global GDP. The share of world exports in GDP had sharply increased since the early 2000s to reach 25 percent in 2008 but it dropped to 21 percent by 2016 (Chart 3). The reduced weight of world trade in the world economy during the post-crisis period can be associated with insufficient global investment demand and the weak demand in advanced countries as well as with decreasing commodity prices and increased protectionist measures.

In both periods, Turkey managed to increase its share of the world trade pie. Despite the appreciation of the real exchange rate amid sharp increases in world trade in the 2002-2008 period, the share of Turkey’s exports in world trade grew. The fact that Turkey almost doubled its world trade share in a relatively short time period underlines the supply-side competitiveness gains in the relevant period. 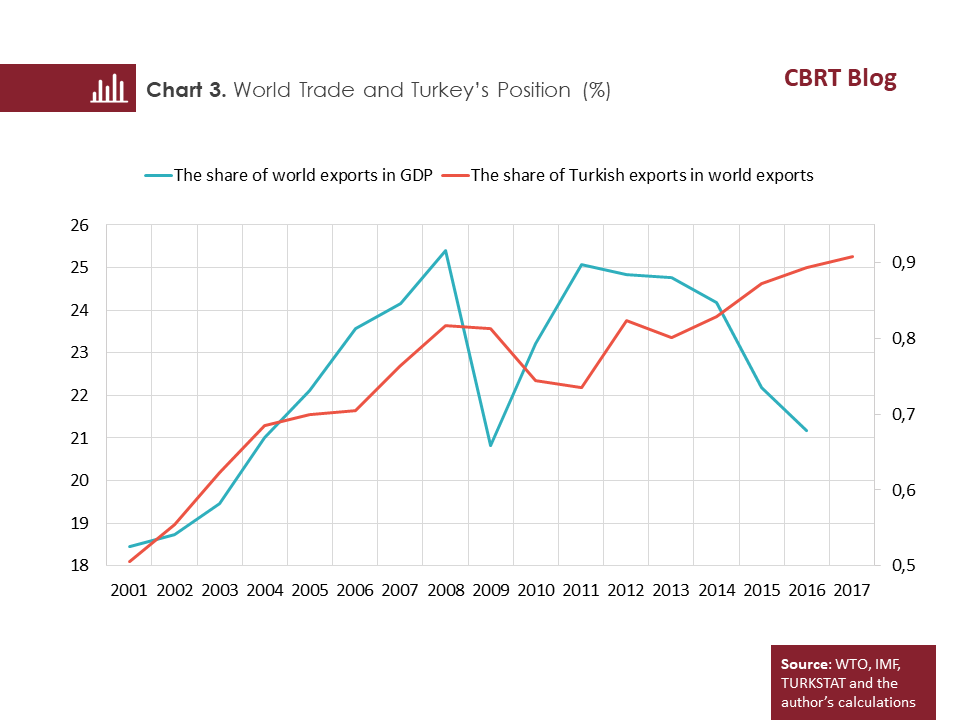 On the other hand, the post-global crisis period involves a different phenomenon. In this period, world trade volume rapidly shrank but Turkey’s share in world trade still surged, as it had in the period between 2002 and 2008. This was despite the unfavorable foreign demand shocks Turkey’s exports received in this period. The slowdown in the domestic demand of energy-exporting countries due to the falling energy prices, coupled with the amplifying effect of geopolitical problems, negatively affected the exports to these countries in particular (predominantly Russia and Middle East and North Africa (MENA) countries), leading to a sharp decline in Turkey’s market share in these countries. On the other hand, there was a substantial increase in Turkey’s market share of exports to EU countries and the US. Accordingly, Turkey’s increased export share in a period of weakening world trade as opposed to the 2000s points to the elasticity of domestic firms when it comes to adapting to changing conditions. This market diversification elasticity despite negative shocks to foreign demand driven by geopolitical developments is supporting exports, which further emphasizes firms’ adaptive capacity. In fact, in 2011 and 2012 when EU-based foreign demand conditions were unfavorable, Turkish firms were able to redirect exports to MENA countries that were less affected by the crisis. Likewise, Turkey’s loss of markets in these countries since 2015 due to the geopolitical uncertainties and the deceleration in the economic activities of energy-exporting countries has been well-compensated by its market expansion in EU countries and the US. Thus, Turkey has managed to increase its share in shrinking global foreign trade (Chart 4).

The market diversification elasticity across country groups is also observed across goods groups. For example, despite Russia’s restrictions on imports of fresh fruit and vegetables from Turkey, the amount of total Turkish exports of fresh fruits and vegetables has not dropped. This indicates that exporters have been able to compensate for the negative effects of foreign demand shocks by shifting to other existing or new markets[1]. 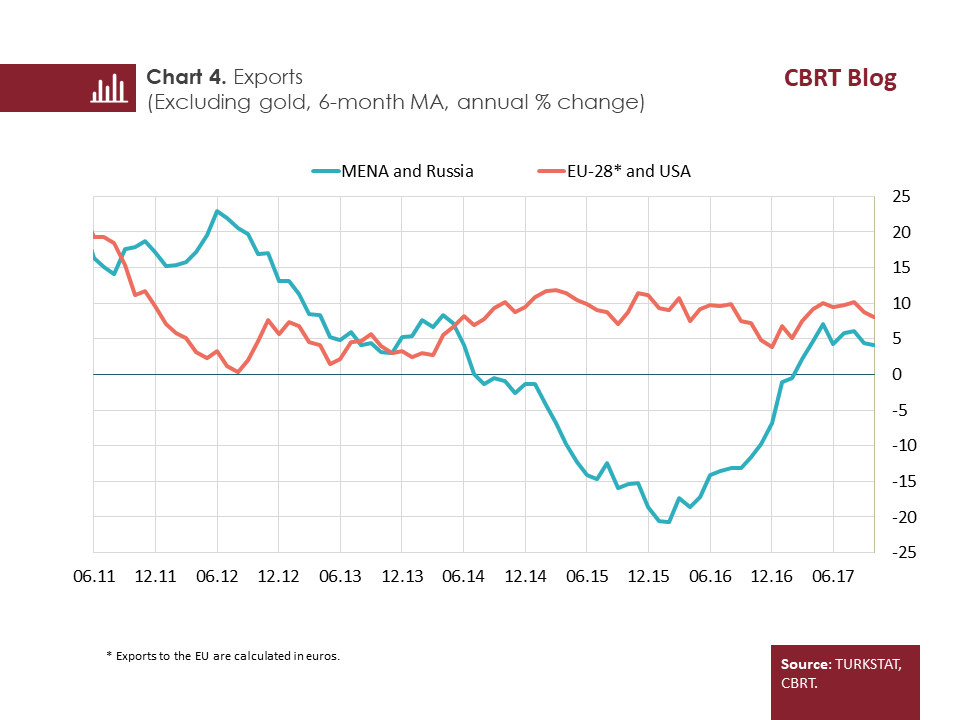 A comparison of Turkey’s export performance with other country groups provides a more clear depiction of the positive divergence of Turkey in the post-crisis period. Charts 5 and 6 show the real exports of Turkey and other country groups. Accordingly, Turkey’s real exports have been positively diverging from emerging countries since 2011. Despite a relative inertia in exports in 2015 and 2016, Turkey’s positive divergence became even more visible in 2017. In regional terms, Turkey’s export performance has been stronger in the post-crisis period than that of all other emerging country groups including Asian countries. 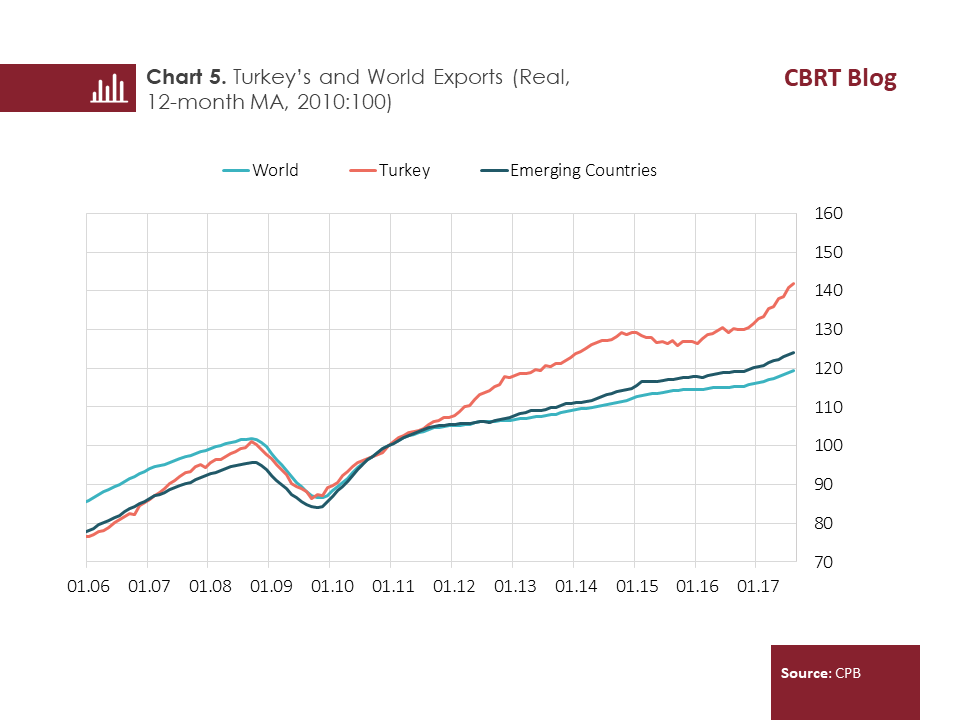 Here, the critical question is: Will the world trade pie continue to shrink? Every six months, the WTO releases world trade growth estimations for the current year and the following year. According to the Organization’s September report, world trade volume is expected to increase by 3.6 percent and 3.2 percent in 2017 and 2018, respectively. These rates correspond to the highest levels in the post-crisis period. At this point, we should note that world trade volume rose by only 1.3 percent in 2016. On the other hand, the WTO’s world trade outlook indicator reveals that the moderate recovery in world trade volume will also continue in the last quarter of 2017 (Chart 7). Accordingly, projections suggest that the uptrend in the world trade volume will remain strong in 2018 and Turkey’s foreign trade partners will show a better growth performance than they did in 2017, indicating that the momentum achieved in Turkey’s exports in 2017 will be sustained in 2018. 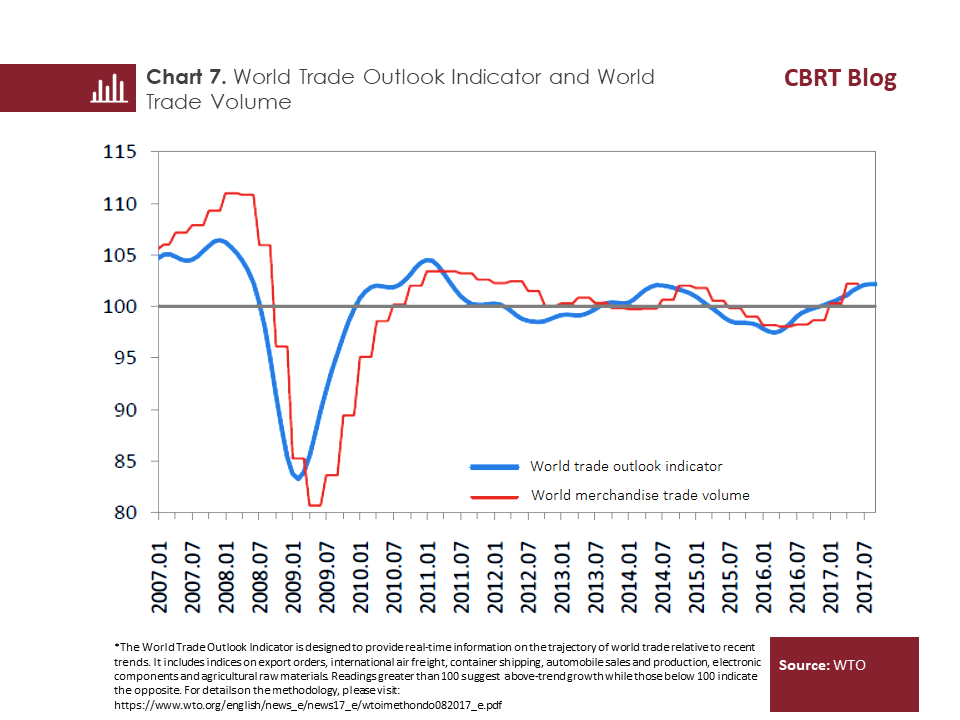