While a substantial number of firms had access to finance with the expansion of the Credit Guarantee Fund (KGF) facility, the majority of KGF guaranteed loans were used by corporates that were already borrowers of bank loans. Moreover, findings suggest that the KGF guarantee had significant implications in terms of credit costs and extension of maturities.

Tuba Pelin Sümer is an Assistant Central Bank Specialist at the CBRT.

Gülcan Yıldırım Güngör is a Central Bank Specialist at the CBRT.

The increase of Treasury-supported Credit Guarantee Fund (KGF) guarantee limit to 250 billion TL from 20 billion TL in early 2017 marked an important step for supporting corporates’ access to finance, offering them loans totaling 218 billion TL by December 2017. Taking into account loan repayments, the stock balance of secured loans totaled 174 billion TL at end-2017. Of KGF guaranteed loans, 73% were utilized by SMEs and 84% were extended in TL. These credits were composed of cash and non-cash loans at percentages of 95 and 5, respectively. Currently, the non-performing loan (NPL) ratio for these loans is limited to 0.5%.

For a better grasp of the implications of the KGF facility that bolstered the credit supply significantly in 2017, a micro-level analysis of the data is needed. A borrower-based examination of commercial credit growth in particular, which intensified in the second quarter of 2017, is important to analyze banks’ risk appetite. This post explores how KGF guarantee scheme supported the corporate sector’s access to credit in terms of maturity, cost and collateral.

Expansion of the Corporate Base with Access to Credits 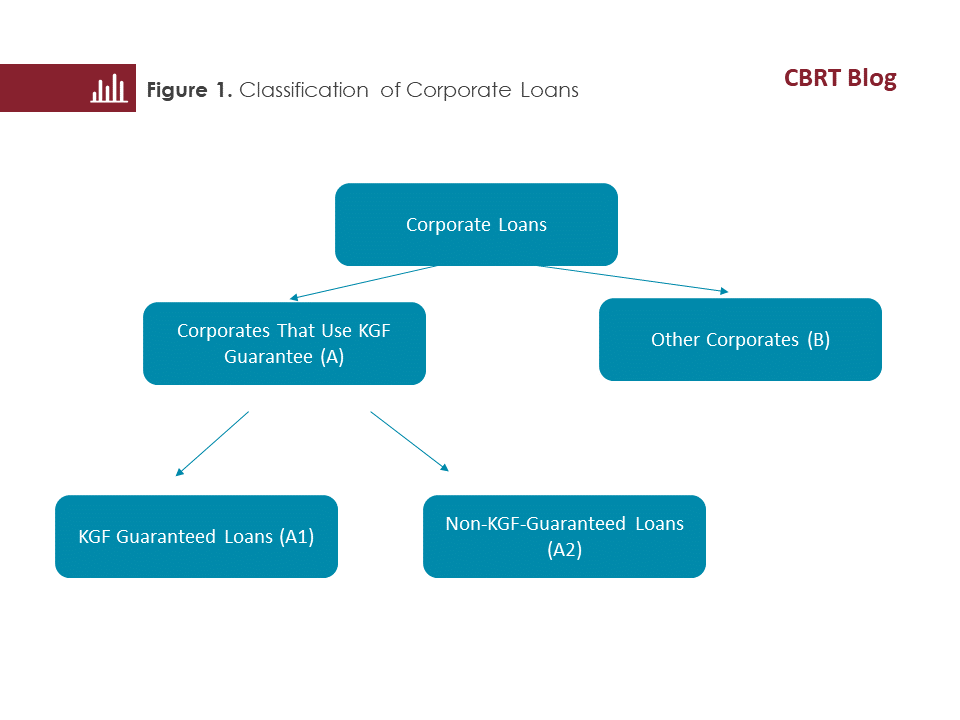 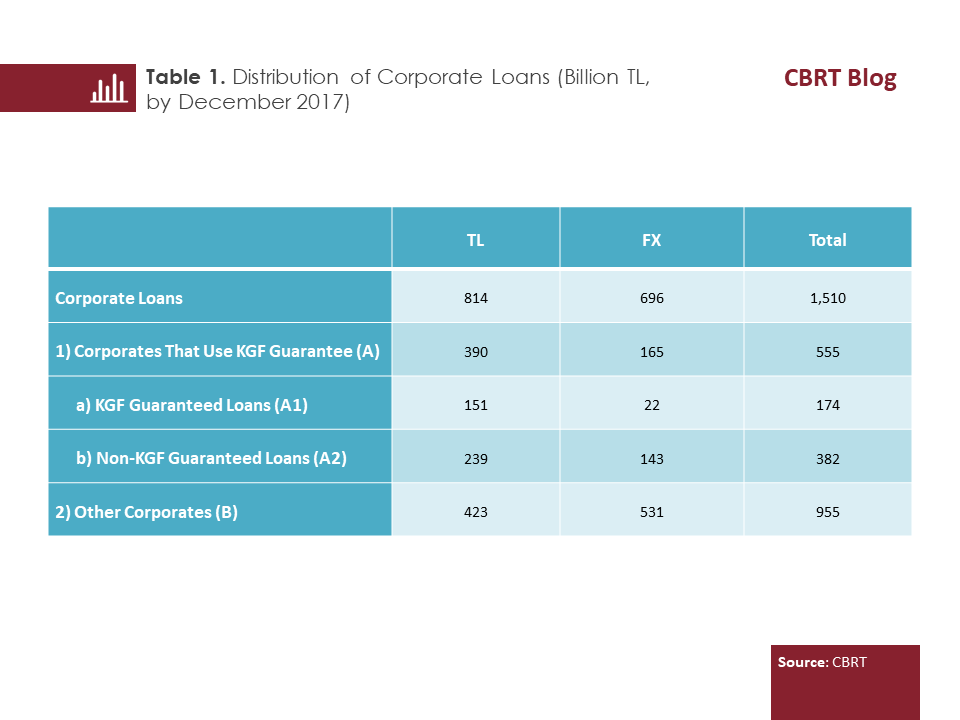 The data in Table 1 indicates that corporates with KGF guaranteed loans are also borrowers of a significant amount of non-KGF guaranteed loans within the banking system and in overall terms, they are certainly not firms that have newly accessed the banking system. Furthermore, corporate-based analyses provide important information on the number of firms (along with their loans) that previously had no access to loans probably due to insufficient collateral and that have newly gained access to the banking system owing to the expansion of the KGF facility.

By the end of 2017, there were approximately 323 thousand corporates with KGF guaranteed loans. In order to reveal how many of these corporates had newly borrowed from the banking system, we analyzed how many of them had a loan from the banking sector in December 2016 before the expansion of the KGF facility. Consequently, out of 323 thousand corporates, 111 thousand did not have a loan at end-2016 and these corporates had only 14.6 billion TL KGF guaranteed loans within the banking sector. Therefore, we can say that in terms of number, one third of the corporates, and in terms of loan amount, 8.4% of loans represented new involvement in the system. With the expansion of the KGF facility, a significant number of corporates that had previously not borrowed from the banking system were provided with access to finance. However, a significant bulk of the KGF guaranteed loan amount was extended to corporates that had already used a bank loan. This also explains the accelerated credit growth in the second quarter of 2017 following the increase of the upper limit of the guarantee. Banks’ KGF guaranteed lending predominantly to their existing clients that already had access to the financial system or to corporates with a credit history created time efficiency during credit evaluation processes. To sum up, these factors explain how the scheme offered banks swift action in lending within the context of corporates’ market recognition during credit allocation processes. It also relatively reduced the uncertainty for banks in terms of evolution of credit risk.

In early 2018, in addition to the increase of the upper limit of the KGF guarantee by 50 billion TL through the renewed protocol, the extension of 5 billion TL gained from loan repayments generated an additional financing source of 55 billion TL. This amount contributed to the credit cost and is believed to be effective in the flat course of SME loan rates in the recent period. 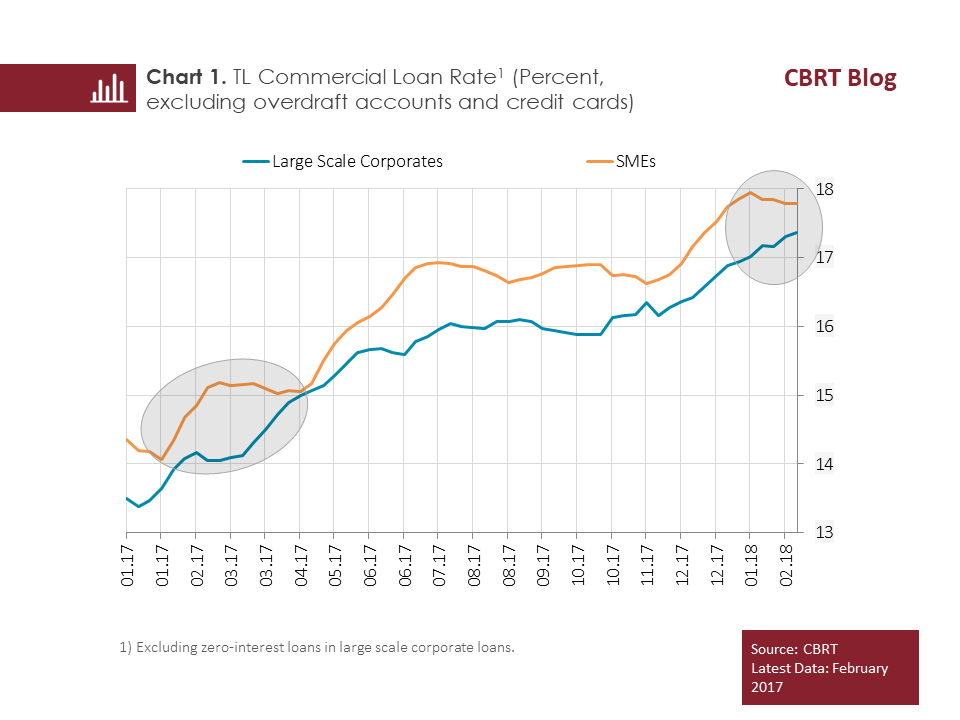 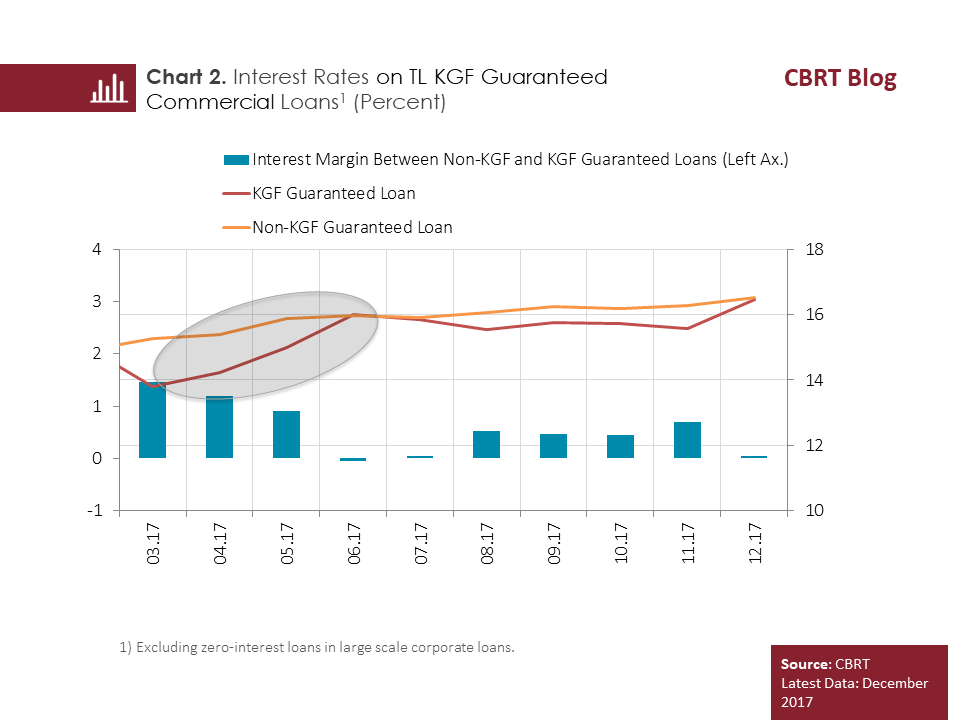 The expansion of the KGF facility also contributed significantly to corporates’ access to loans in terms of extension of maturities. Concerning commercial loans denominated in TL, the weighted average original maturity was 2.6 years and the remaining maturity was 1.7 years by the end of 2016. The KGF facility was intensively used as working capital loans that can have maturities from 6 to 60 months and the average maturity in these loans materialized as 3.4 years. Corporates’ borrowings at longer maturities are important in terms of reducing the amounts of installments at various intervals such as monthly/quarterly and facilitating the improvement of the debt service ratio.

An analysis of the average maturities of KGF and non-KGF guaranteed loans extended to corporates which benefited from the KGF facility also gives an insight into to what extent the guarantee scheme helps the same firm access to credit at longer maturities. In fact, the average maturity of KGF guaranteed loans extended in TL is 3.4 years, whereas that of non-KGF guaranteed loans extended to same firm group is 2.4 years. In brief, the increase of the KGF guarantee facilitated extension of the average maturity of TL loans by one year. On the other hand, KGF guaranteed borrowings in FX remained limited and FX loans were predominantly used by large scale firms without guarantee. Thus, the effect of the KGF scheme on extension of maturities in FX loans remained relatively limited (Table 2). However, the allocation of the increased guarantee limit and the portion to be extended out of guarantee repayments to investment and export-focused sectors at the beginning of 2018, the maturity-extending effect of the KGF scheme on FX loans is expected to become evident in the period ahead.

All in all, the expansion of the KGF facility provided a large number of corporates with access to finance and the majority of the guaranteed loan amount was extended to those corporates that were already borrowers of a bank loan. Moreover, findings reveal that KGF guarantee has had significant implications in terms of cost of credit and maturity extension.

Gülcan Yıldırım Güngör is a Central Bank Specialist at the CBRT.

Tuba Pelin Sümer is an Assistant Central Bank Specialist at the CBRT.