Banks’ long-term borrowing tendency has strengthened due to the measures introduced. The change in the maturity composition of external debts in favor of the long term increases the sector’s resilience to liquidity shocks and supports financial stability.

The banking sector’s liabilities are composed of equities, deposits and other sources. Along with equities, deposits, which constitute the main funding item of banks, are also categorized as core liabilities as they are a more stable source in terms of the roll-over risk. On the other hand, non-core liabilities are made up of domestic funds usually obtained via repo transactions, debts to banks and bond issues, and external sources obtained via various instruments at various maturities (bond issues, foreign trade financing, bilateral loans, syndication, etc.). The majority of external sources is received in foreign currency, and the lender institutions’ return expectations and risk appetites, perceptions and management play a determining role in the roll-over of the debt. This fact makes these liabilities sensitive to a series of variables including liquidity developments in the first place, followed by global and regional geopolitical developments, exchange rate and yield spreads, expectations, and legal and fiscal regulations. Due to this sensitivity, the amount, maturity and cost structures of external sources become important for obtaining and rolling over the debt. This study offers an analysis of the measures introduced by the CBRT to increase the maturities of external sources obtained by the Turkish banking sector as well as the consequences of these measures.

It is a common practice in the banking sector to borrow via short-term sources and lend via long-term loans. The maturity mismatch has a determining effect on the sector, particularly on bank profitability, liquidity and risk management. The maturity mismatch between the asset and liability sides brings to the forefront the debt roll-over risk for banks. This risk falls in central banks’ area of interest as lenders of the last resort due to the possible effects on the sector players, the regulatory institutions, and financial stability. There is a higher probability that the maturity of short-term loans will be due in a period of financial stress, which causes short-term debts to be more fragile than long-term debts. In other words, longer maturities allow banks to survive financial stress periods without being exposed to the roll-over risk.[1] Therefore, in addition to investment areas creating the other short-term portfolio flows, short-term bank debts are also believed to have a significant role in the rapid spread of financial stresses to other countries.

Although the average maturity of deposits, which constitute approximately 56 percent of the Turkish banking sector’s liabilities, is short, it nevertheless creates a limited amount of roll-over/liquidity risk for banks. The maturity structure of external debts that are sensitive to the global risk appetite or liquidity developments is also important in terms of the roll-over risk.[2] External sources of the Turkish banking sector, which had been steadily increasing since 2002, shrank in the 2008 global crisis period due to the reduced risk appetites of foreign banks and the decreased demand for external sources by the Turkish banks (Chart 1).

Global liquidity conditions that eased following the quantitative easing policies introduced in the aftermath of the global crisis period triggered banks’ risk-taking behaviors in both advanced and emerging economies (Rey, 2013). Particularly, the continued implementation of quantitative easing policies through second and third stages reduced the banks’ perception of debt roll-over risk and strengthened their “search for yield”. The weakening of the external debt roll-over risk in a supportive global liquidity environment boosted the banks’ tendency to borrow at the short-term end and lend at the long-term end of the yield curve. Consequently, the average maturity of external debts shortened (Chart 1 and 2). 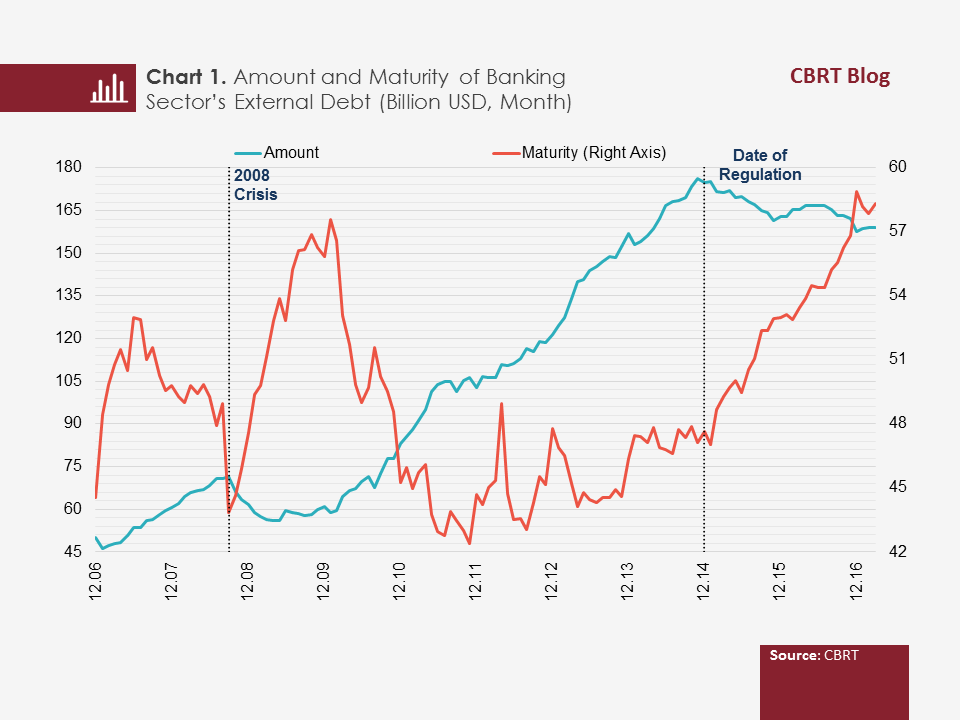 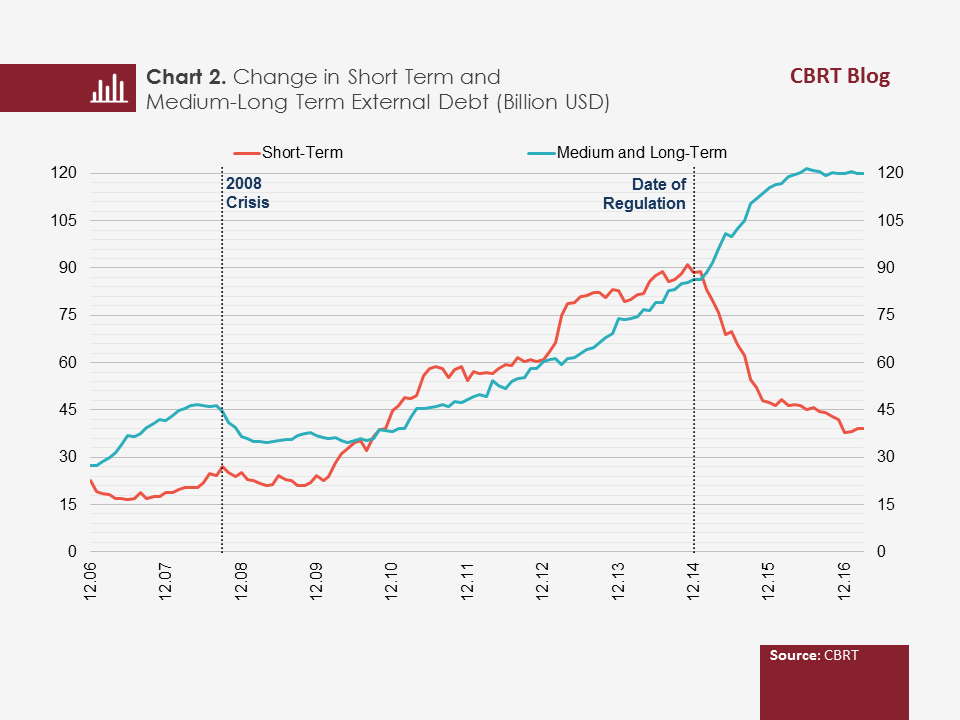 The CBRT took a series of measures to support financial stability in the face of the sector’s shortened external debt maturities and the liquidity conditions that tightened due to the Fed’s normalization steps. It was stated in the Financial Stability Report released in November 2014 that measures encouraging prudent borrowing and supporting financial stability would be employed when deemed necessary, due to the increased volatility in global capital flows triggered by the normalization process in monetary policies. Throughout 2015, the reserve requirement ratios for new FX liabilities excluding deposits/participation funds were significantly raised for maturity tranches shorter than 3 years (Table 1).

As a result of the policies aiming to enable banks to borrow from abroad with longer maturities and thus contain the external debt roll-over risk arising from increased volatilities in global capital flows, the maturities of banks’ external debts started changing in favor of the long term (Chart 3). The share of short-term debt in total debt was 52 percent in November 2014 when this guidance was first introduced, whereas this ratio dropped to 24 percent as of March 2017. In this context, the average maturity of external debts rose to 58 months from 47 months, which further strengthened the sector’s resilience to global liquidity shocks. 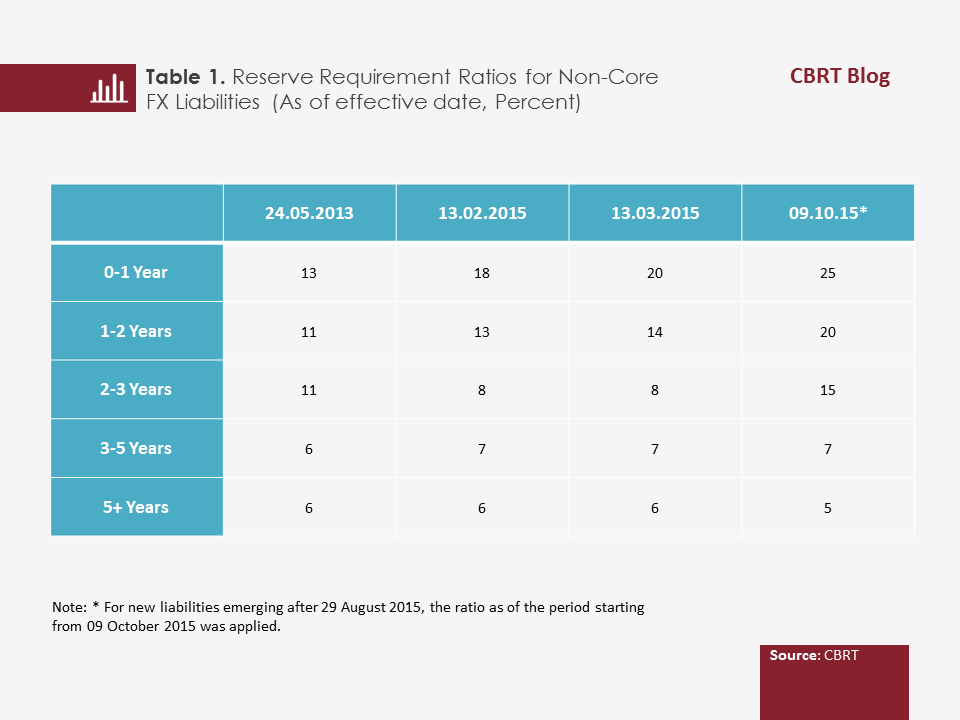 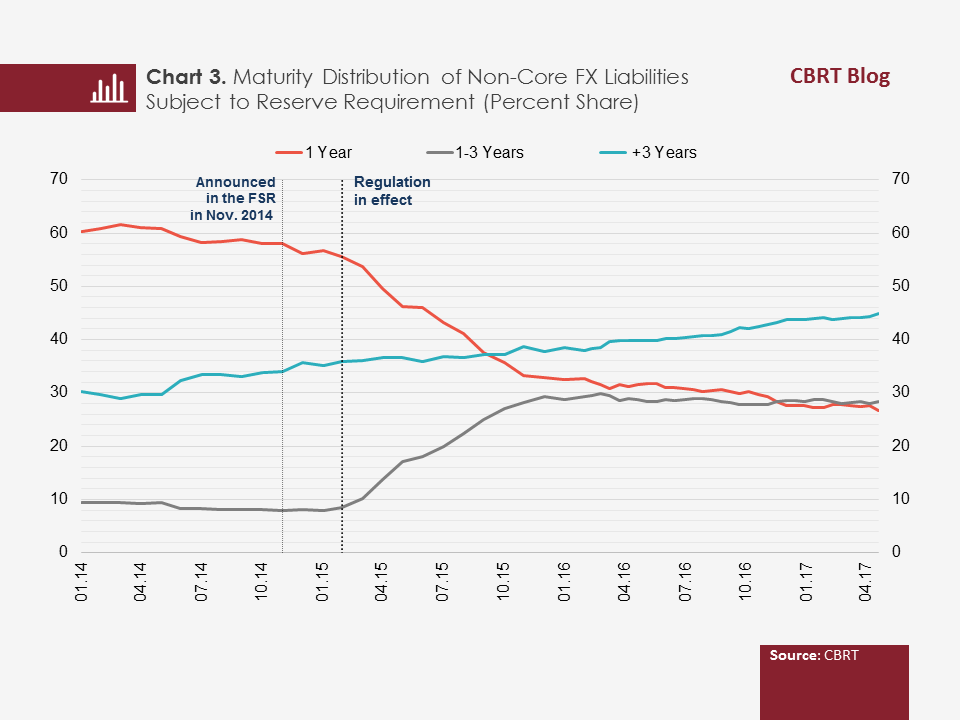 The tendency for longer maturities has been visible in all external debt instruments. In this period, the weakened preference for short-term repo funding and the tendency for long-term bond issues constituted the main dynamics of the change in maturity composition (Chart 4).[3] The change in the maturities of banks’ external debts in favor of the long term positively contributes to the “Reserves/Short-Term Debt” ratio and supports financial stability. The lengthening in maturities will also contribute to banks’ Net Stable Funding Ratio.[4] Moreover, it should be noted that the positive developments in the funding composition increase the sector’s potential to bolster medium and long-term infrastructure investments. Favorable developments in the maturity and cost composition of non-deposit alternative funding sources will also have a downward effect on the deposit rate. 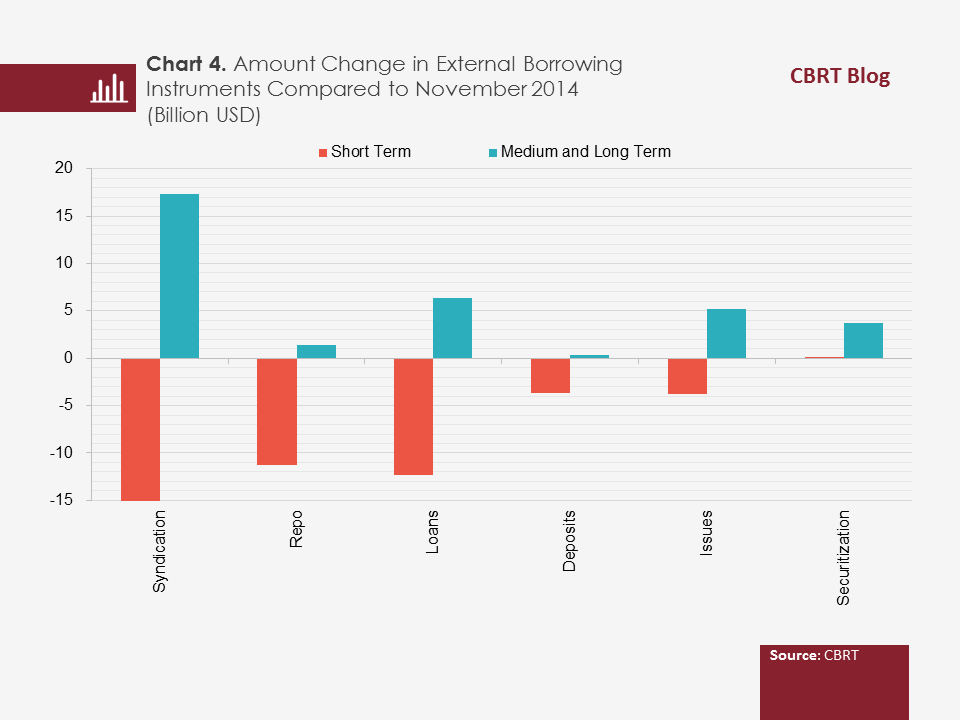 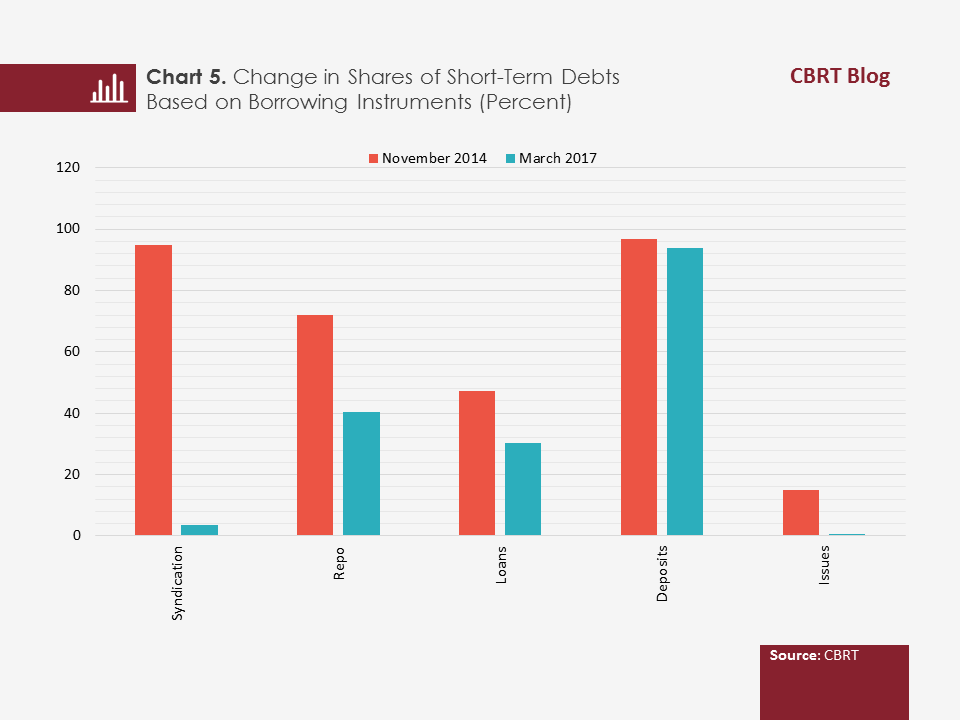 To conclude, banks’ long-term borrowing tendency has strengthened due to the measures introduced. The change in the maturity composition of external debts in favor of the long term increases the sector’s resilience to liquidity shocks and supports financial stability.

[3] In particular, the maturities of syndicated loans and external bond issues, which are relatively more sensitive to global liquidity developments, continue to lengthen and the share of short-term loans has dropped to 3.4 and 0.7, respectively, which limits the risk that may come from this channel (Chart 5). Yet, there has been a limited lengthening in the maturity of syndicated loans, and banks conducted borrowing transactions with a maturity of up to two years.

[4] To monitor banks’ long-term liquidity positions in a more comprehensive manner, the Basel Committee has introduced the Net Stable Funding Ratio taking into account the maturity matching on the asset and liability sides. Detailed information on this ratio can be found in Box III.2.1 in the CBRT’s Financial Stability Report No.24.