The Dynamics of Loan-to-Deposit Ratio in Turkey

By setting a small dynamic model, this note proposes a clear analytical explanation of the dynamics of LDR in Turkey.

Loan-to-deposit ratio (LDR) is a key indicator monitored to gauge banks’ structural liquidity positions. It is a ratio simply showing how much of the banks’ key assets, loans, are funded by key stable funding resources, namely deposits[1]. Therefore, presumably, the lower the LDR of a bank, the lower is the likelihood of that bank facing liquidity stress[2]. There is no universally accepted optimum value for the ratio and the indicator displays a wide variation across countries.

The average LDR of the Turkish banking sector and LDR of almost all the Turkish banks have risen steadily over the last eight years and reached above 120 percent in 2018 from around 80 percent in 2010. Due to its potential implications on the financial soundness and intermediation capacity of banks, the steady rise of the indicator and the levels it reached merit a closer look at the dynamics and drivers of this ratio.

Many factors are at interplay in a sector level rise in LDR[3]. In Turkey’s case, both asset side and liability side dynamics contributed; during the said period, the share of loans in assets has risen, while the share of deposits in liabilities has diminished. As the strong credit demand has not been matched by a commensurate increase in deposits, which is another manifestation of the investment saving imbalances in Turkey, banks have resorted to external sources (Chart 3).

Naming the factor(s) behind the rise in the LDR is not enough to foresee the future path of LDR and, if deemed necessary, to design measures to contain it. To this end, one should be able to describe the link between the LDR and its drivers analytically. By setting a small dynamic model, this note proposes a clear analytical explanation of the dynamics of LDR in Turkey[4].

Our model consists of three equations, describing output and credit dynamics, and balance sheet constraint of the sector:

The first equation specifies a constant (ß) growth rate for the nominal output (Yt). The second equation defines credit (L) dynamics, such that net credit (ΔL) as percentage of nominal output is constant (µ). The last equation reflects banks’ balance sheet constraint; net increase in credit is matched by the sum of net increase in deposits, ΔDt, and net borrowing from abroad, θσYt. Net borrowing from abroad by banks is assumed to be a constant fraction (θ) of current account deficit (σYt), which is assumed to be proportional to nominal output[5],[6]. The simplifications we imposed concerning the output growth (eq1), credit supply (eq2) and banks’ borrowing from abroad will not affect the performance of the model significantly, if those variables display a mean reverting pattern without having any discernable trend. 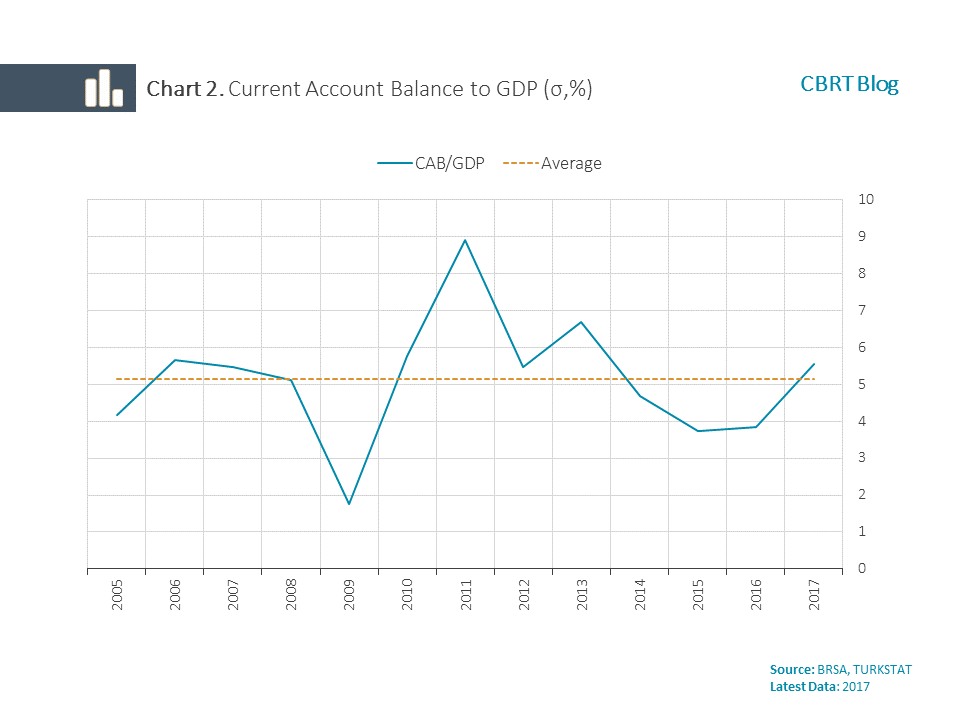 As we are interested in the dynamics observed in the last 15 years and want to learn how the future path of LDR will look if the current course of key macro variables is sustained, we used the historical data to calibrate the model parameters. Charts 1 to 4 show the historical evolution of the macro variables that we assumed constant. None of the series has a visible trend; furthermore, they display a mean reverting pattern albeit with large fluctuations around the mean. 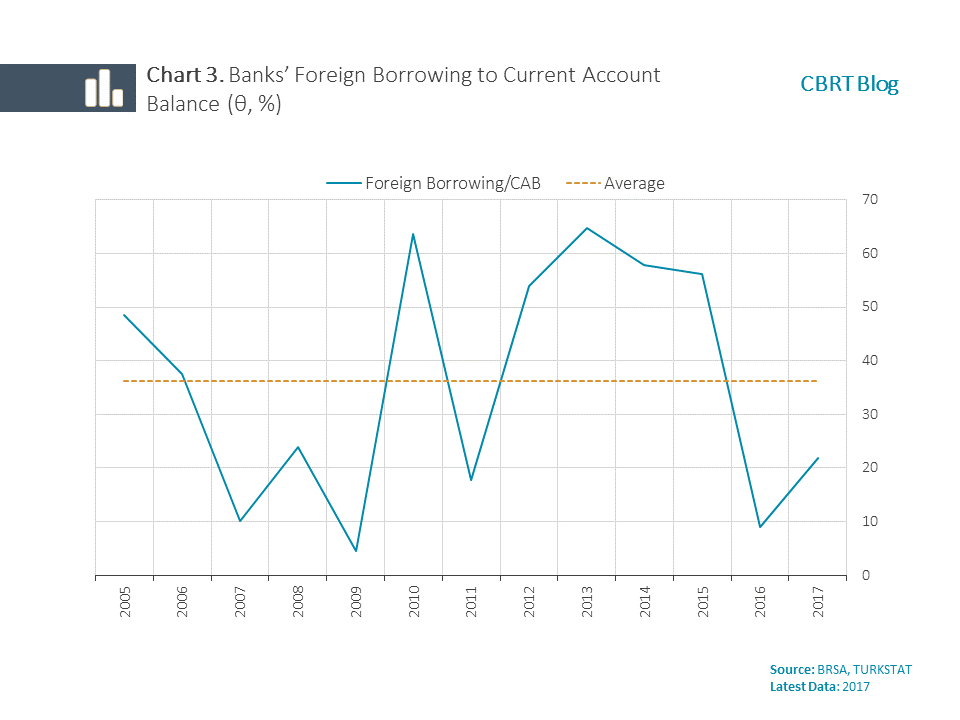 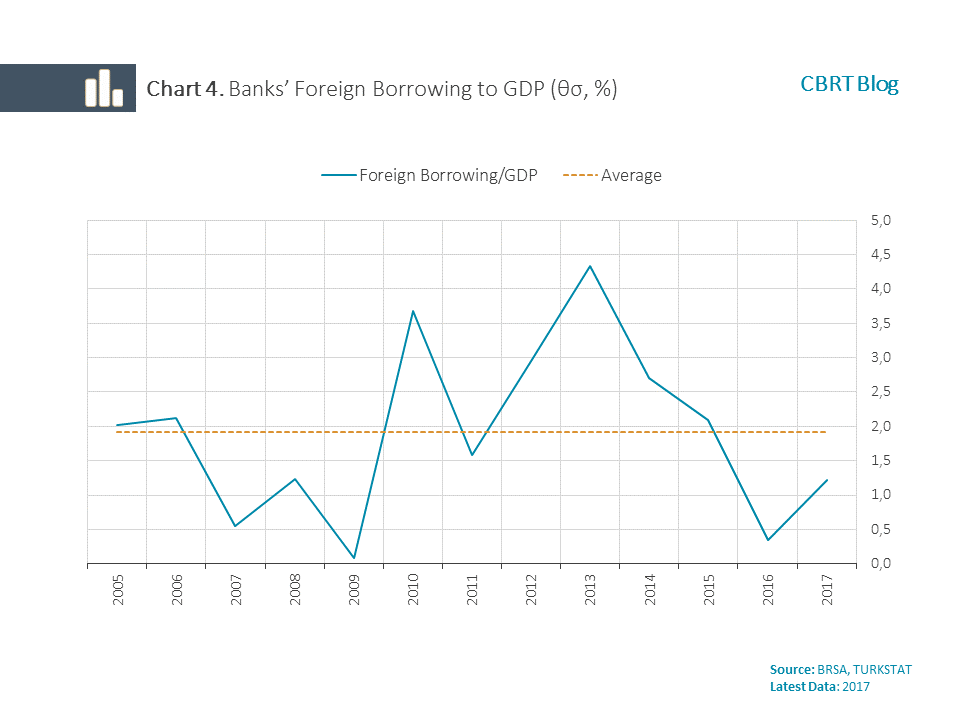 Now, we can start to check the implications of the analytical framework. First, this system implies a stable steady state level for LDR, as well as the ratio of loans and deposits to GDP. The steady state value of LDR is:

In plain words, the equation implies that the long run value of LDR depends on net credit-to-GDP ratio (µ) and banks’ borrowing from abroad as a percentage of national income (θσ) or current account deficit (θ)[7]. Using the parameter values obtained from the historical data, we calculate the long run value of LDR as 130 percent. That is, if the banks’ borrowing from abroad as a share of GDP and the increase in net credit to GDP is sustained around the average values of the last 13 years (the 2005-2017 period), LDR would converge to 130 percent and remain around this value in the long-run. Chart 5 shows the range of steady state values that LDR takes under different combinations of these two parameters. We also marked the LDR values implied by parameters calculated for two different periods and the LDR value implied by the current account balance target set out in the New Economy Program (NEP). For instance, if parameter values remain at their 2010-2017 averages, the LDR ratio would converge to 137 percent[8]. However, if current account balance stays around the levels foreseen in the NEP, while other parameter values preserve their historical (2005-2017) values, then the steady state level for LDR is calculated as 115 percent. 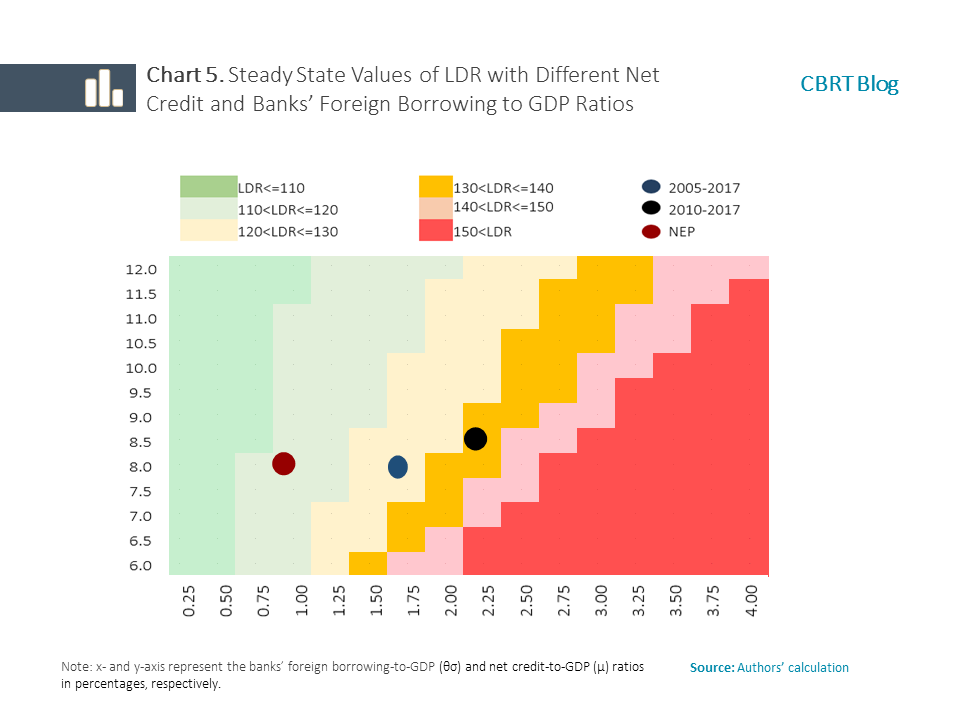 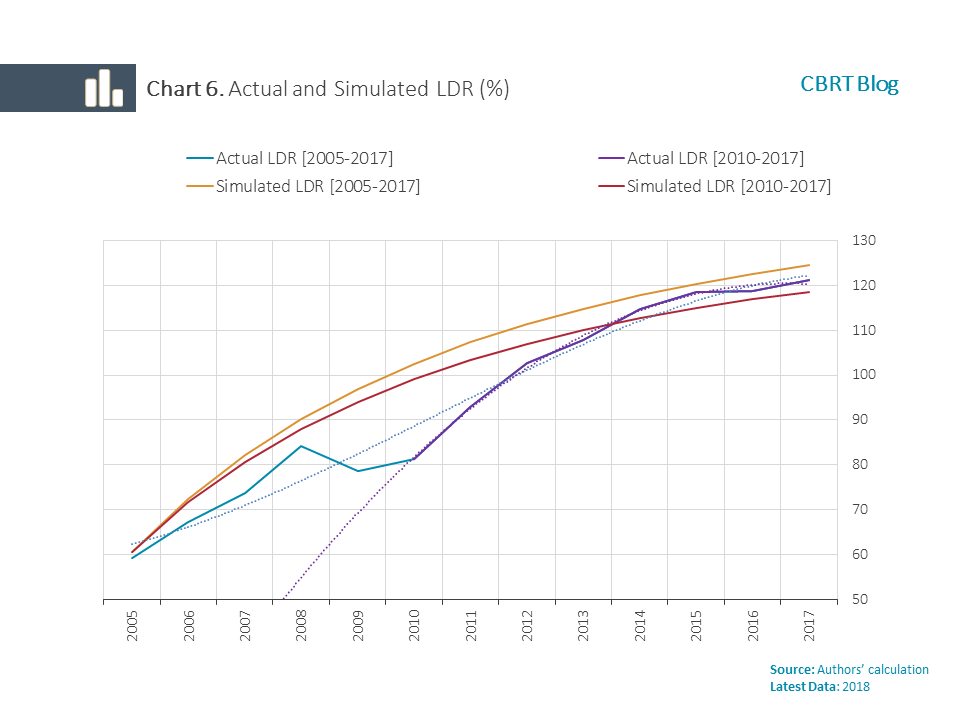 Depending on its initial position, the dynamic system also implies a path for LDR. To assess the performance of the dynamic aspect of the system, we derive two implied paths based on two calibration configurations that use 2005-2017 and 2010-2017 period averages. We started the LDR ratio from 60 percent, which is the actual value of LDR in 2005, and simulate 13 years forward. Chart 6 shows the simulated and the actual paths together (and polynomial trends for the latter). The simulated paths mimic the actual path quite successfully. As the calibrations reflect the historical averages, the simulated paths do not capture the fluctuations around the trend. Similarly, in the 2005-2009 period, the simulated paths are steeper than actual, as during the 2010-2017 period foreign borrowing by banks was higher than the average of the entire period.

Our simple analytical model shows that the LDR path is closely linked to the macroeconomic dynamics and structural characteristics of the economy. The model suggests that, if the relevant macro variables sustain their historical trends, the LDR will stabilize around levels slightly above their current levels while the growth rate of credits converges to GDP growth. Indeed, the flattening of the LDR curve and the diminishing gap between the credit growth rates and the nominal GDP growth in recent years, indicate that variables were close to their steady state values. However, it should be noted that implied steady state levels depend on the aforementioned parameters. For example, if the current account deficit to GDP ratio declines permanently due to higher saving rates or the share of banks’ borrowings from abroad decreases in total external borrowings from abroad (for instance due to a deepening in capital markets), then the implied steady state value will change. Lastly, we should also highlight that the above analyses utilize a partial equilibrium framework. Therefore, the validity of the results and deductions relies on the validity of implicit and explicit assumptions that the analyses were built upon.

[1] LDR is similar to Net Stable Funding Ratio (NSFR) of Basel III. As the implementation of NSFR becomes more prevalent across national jurisdictions, LDR might lose its popularity. Nevertheless, although NSFR formula takes also other balance sheet items into account, for deposit banks loan and deposits will remain as the most important determinants of this ratio.

[3] Changes in the way domestic agents fund themselves can affect LDRs substantially. For instance, an increase in the banks’ use of securities or international debt flows as funding sources or, on the firms’ side, a shift from securities to bank loans can increase LDR. Macro factors such as government budget balances and the way it is financed might also impinge on the LDR ratio.

[4]This note is an extract from an unpublished paper titled "A Macrofinancial Linkage Story: from Current Account Deficit to Deposit Competition" by Koray Alper and Tanju Çapacıoğlu.

[5] Other factors like regulatory capital, reserve requirements, changes in banks’ government bond holdings have also been affecting LDR. However, during the period on which we focus, the role of these factors on the LDR dynamics was limited.

[6] Relating banks’ external borrowing to current account deficit seems like ignoring the importance of gross flows. However, unlike the advance economies, and as is the case for most emerging and developing economies, in Turkey net flows almost coincide with gross flows.

[8] Accounting for the securities improves the qualitative predictions of the model. Nevertheless, for the sake of simplicity we focussed on the most important drives of the LDR. To give an idea, if the ratio of annual change in securities portfolio to annual change in credits stabilizes around 10% (for the 2014-2017 period average value of this ratio is slightly below 9 percent), then the implied steady state level of LDR would be calculated at 10 percentage points less.