Exchange Rate Effect on Monetary Aggregates: How Do We Adjust?

The money supply refers to aggregates that show the amount of money circulating in an economy as well as certain financial instruments under specific classifications based on their degree of liquidity. These aggregates are classified in Turkey as narrow (M1), intermediate (M2) and broad (M3) money supply as shown in the table below, and they are announced on a weekly basis in period-end stock values. As foreign currency (FX) liquid assets are a close substitute for analogous Turkish lira (TL) assets for money holders, FX aggregates are also included in the money supply.

The most recent data reveals that the share of TL deposits in M3 is 48% while that of FX deposits and other items is 43% and 9%, respectively. These ratios demonstrate that exchange rate fluctuations have a significant role in the change in money supply in Turkey. Therefore, besides the weekly money supply data it publishes on the EVDS[1] , the CBRT has also decided to publish the “index of notional amounts” that can be used in the calculation of exchange rate-adjusted growth rates.

In this step, the change from one period to another is decomposed as “net change” (the change to be seen in the stock if there were no exchange rate movement) and “exchange rate-driven change”. The calculation method varies depending on the method of reporting the item to be adjusted for the exchange rate. That is to say, under weekly money and banking statistics, banks report US dollar and euro deposits in their original currency amounts, other FX deposits in their USD equivalent, and precious metal deposit accounts in their TL equivalent.

The exchange rate effect for deposits reported in original currency (in dollar and euro) is calculated as follows:

In their weekly reports, banks also classify deposits denominated in currencies other than the dollar and the euro as “other” and report these deposits in their USD equivalent. In this case, the exchange rate effect is calculated using the same formula. However, this time, the variables ERt and ERt-1 do not denote the original currency-denominated buying price of deposits but the dollar buying rate. The formula for this group of deposits is as follows:

For precious metal deposit accounts that are reported in terms of their TL equivalent in weekly reports, the exchange rate effect is obtained by calculating the net transaction over the USD equivalent of period-end stock amounts and deducting it from the total change. The calculation that employs the CBRT buying rate is as follows:

The total exchange rate effect and the net transaction within the money supply are calculated as follows:

Step 2: Calculation of the index of notional amounts[2]

The index thus calculated is defined as an analogous series independent of its unit. For example, a fall of the index from 100 to 90 means it has fallen by 10% between the two periods, when the money supply is adjusted for the exchange rate effect.

Growth rates are calculated via the index as follows: 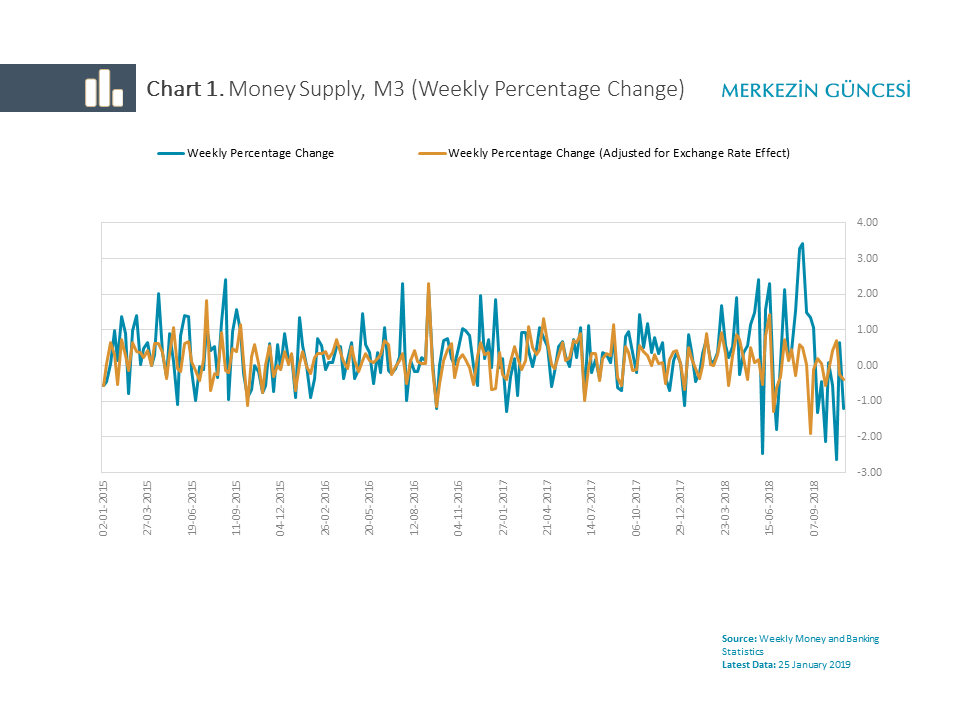 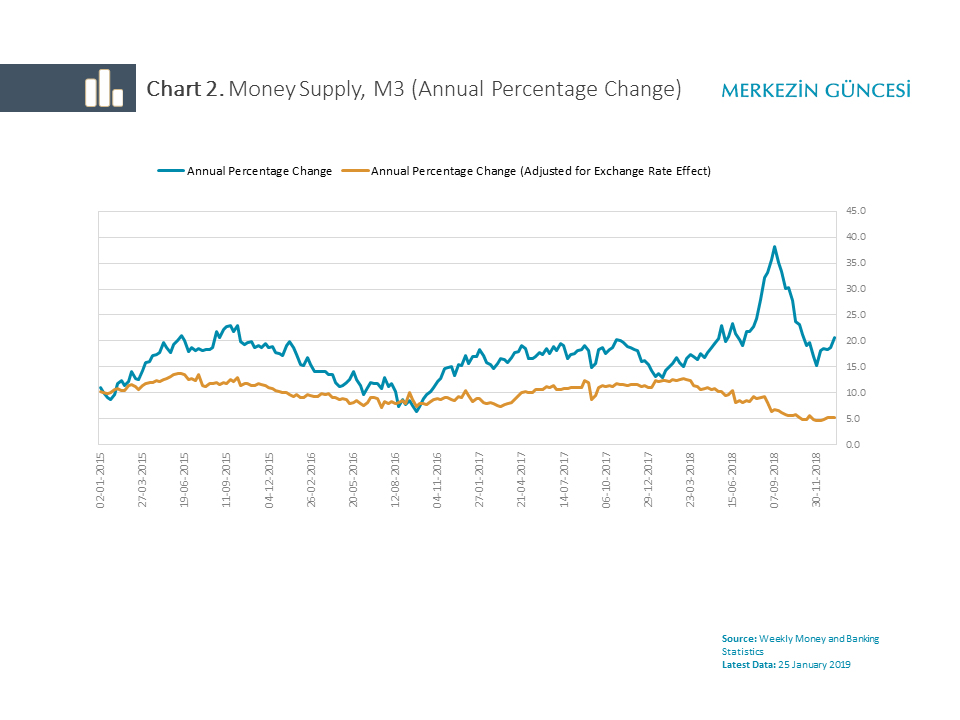 [2] Calculations in this section are largely based on chapter 7.3 on “Index of notional stocks and growth rates” in the European Central Bank’s Manual on MFI balance sheet statistics.